'A stunt': Senator Pauline Hanson slammed for plans to climb Uluru ahead of ban

Senator Pauline Hanson is set to scale Uluru as part of her campaign to keep the climbing route open for visitors. 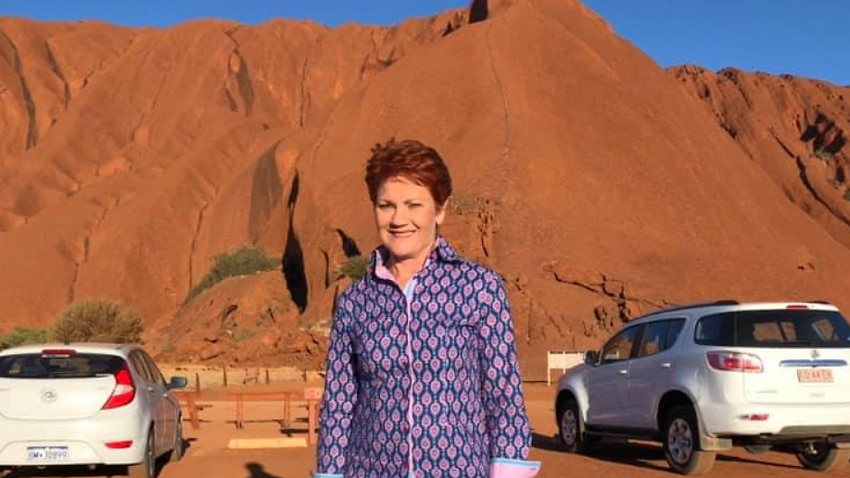 One Nation leader Pauline Hanson is under fire for planning to scale Uluru on Wednesday as part of her campaign to keep the site open for climbing.

Uluru is considered sacred by the traditional owners, the Anangu Aboriginal people, and the Uluru-Kata Tjuta National Park will close the climbing route in October.

Senator Hanson arrived at Uluru on Wednesday and said she will make the climb as soon as weather allows.

"I have been given permission by Anangu Mayatja Council of Elders, Mr Reggie Uluru and Mr Cassidy Uluru to climb the Rock. Both are senior traditional owners of Uluru," she said on social media on Wednesday afternoon.

Even with the permission of these elders, she has been criticised by both Indigenous and non-Indigenous Australians.

Ms Burney, the first Indigenous woman in the House of Representatives, accused Senator Hanson of cultural insensitivity for her ongoing campaign.

"She has no appreciation whatsoever of the cultural significance of Uluru ... Uluru is a living being for Aboriginal people. It's not something that you clamber over," she said.

Ms Burney visited Uluru on Sunday where she "had a long conversation with some of the traditional owners [who] explained to me the very real and deep cultural reasons why they are resolute in closing the climb with the full endorsement of the management of the park".

She also dismissed the fact that Senator Hanson received "permission" to climb.

"The climb is an open climb at the moment. The traditional owners cannot stop anyone climbing [for the time being]," she said.

Ms Burney added that safety concerns are a big reason why traditional owners and management will close the climb.

You continue to display that dangerous combination of ignorance and arrogance. Also, as one old lady to another: it is not a safe activity for you, Senator.

Pauline Hanson (@PaulineHansonOz) will be climbing Uluru today. It'll be the first time she's featured on any high ground. #auspol

You are being incredibly disrespectful.

But there have also been messages of support on Senator Hanson's Facebook page.

In 2017 the Uluru-Kata Tjuta National Park Board voted unanimously to close the climb, in a decision widely welcomed by Indigenous leaders who said it recognised the cultural significance of the site and would "right an historic wrong".

The last day to climb has been set for 26 October.

"This decision has been a very long time coming and our thoughts are with the elders who have longed for this day but are no longer with us to celebrate it," Central Land Council director David Ross said at the time.

"The fact is, it's money-making. It's giving jobs to indigenous communities, and you've got thousands of tourists who go there every year and want to climb the rock," she said.

The 'please do not climb Uluru' sign. Source: Supplied

About 300,000 people visit the area each year but the number who opt to climb Uluru has been steadily falling.

A sign at the site has long requested people avoid climbing out of respect for the wishes of traditional owners.

Figures from Parks Australia indicated only 16 per cent of visitors to the park made the climb between 2011 and 2015, down from about 74 per cent in the 1990s.

Though there has been a spike in recent months, most likely because of the impending ban.