The Abbott government’s senior leadership considered a range of severe cuts to social security for young job seekers in the 2014 Budget, according to the ABC. 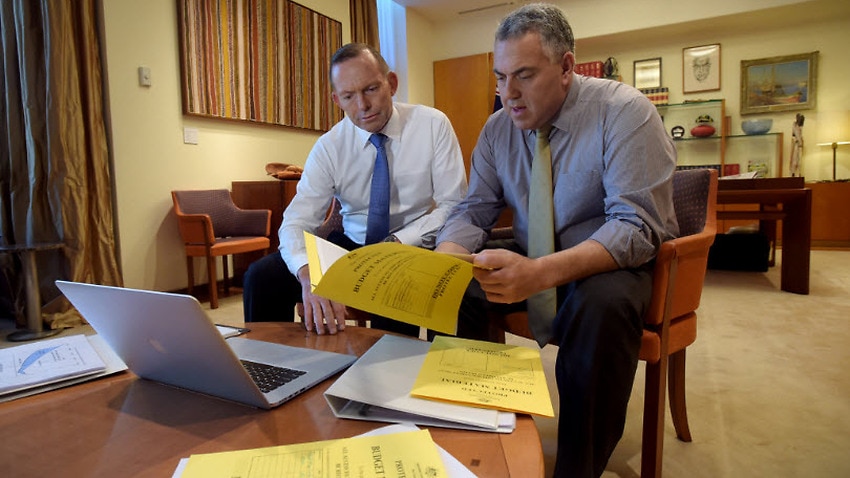 File: Tony Abbott and Joe Hockey pose for pictures as they look through budget papers at Parliament House in Canberra in 2015. Source: AAP

Tony Abbott’s financial leadership team considered severe cuts to Centrelink payments for job-seekers under the age of 30 in the lead up to the 2014 Budget, the ABC reports.

The 2014 Budget contained a range of welfare cuts, but the proposals detailed in this report were never adopted.

The ABC claims to have obtained cabinet documents from that period that showed notes from Mr Abbott’s expenditure review committee – which included then-treasurer Joe Hockey and finance minister Mathias Cormann – asking their social services minister to consider Centrelink cuts for "job snobs" in the under-30 bracket.

The social services minister at the time, Kevin Andrews, then responded with three options, according to the report: cutting welfare for under-30s entirely, cutting it for under-30s who lived in areas with job opportunities, and limiting income support to young people with employment history.

But, as well as drafting the options, Mr Andrews reportedly warned his party leadership against the cuts.

“This is a fundamental change to Australia's universal social security system … it is not clear that there is a strong evidence base for this approach,” Mr Andrews wrote, according to the ABC.

Read More
Coalition should limit immigration to win the next election: Abbott

Defence industry minister Christopher Pyne was asked about the story on Monday morning.

“This is a four-year-old speculative story. Nothing came from it and quite frankly it’s not worth commenting on,” Mr Pyne told ABC Radio on Monday.

The ABC has now published the documents online.

LIVE NOW - you can read the classified cabinet proposal to slash welfare to young people https://t.co/fIvCqja6Jg

Cabinet documents are exempt from the Freedom of Information Act and so were likely obtained via a leak.