The state government argues bulldozing houses and relocating residents to nearby towns will end years of impoverished living conditions, with the future of 37 Aboriginal communities under review. But many residents disagree.

David Hadden’s job as an environmental health officer sees him drive hundreds of kilometres across Western Australia’s Goldfields region, inspecting everything from mine sites and restaurants to residential houses.

But it’s the worsening state of public housing in Indigenous communities that has him worried. “There are safety issues with the electrical work being done. The plumbing and often broken sewerage systems, that’s a major health issue. Reports are being made to the state government by the tenants, but it’s taking too long to get resolved.” The WA Department of Communities is responsible for tenants and property maintenance but has contracted these services to international charity Community Housing Ltd.

“The tenants are reporting problems to the department – but often, it seems they are having to wait an awfully long time to have that work done,” Mr Hadden says.

The WA Government is currently considering the future of 37 Aboriginal communities across the state, where it says ‘housing and infrastructure is in ongoing decline’.

Under a major reform project, communities described by the state government as ‘town-based reserves’ will either be absorbed into major towns or be closed and have residents relocated.

But many residents are wondering why housing in their communities has been allowed to deteriorate to such an extent in the first place. In the community of Bondini, Dallas Harris has lived in state housing for eight years.

Ms Harris says rent has been paid every week, but she has never seen any major improvements to the home.

Currently, the bathroom has no electricity and broken pipes leak water throughout the house into the bedroom. Ms Harris says she recently went an entire month without a working toilet, after reporting a plumbing issue and not receiving a response. Bondini is one of the state’s ‘town-based reserves’ that will soon be audited by the WA Government’s Regional Services Reform Unit, with a decision then made about the community’s future.

The water runs into the bedroom and is causing walls to rot. It still hasn’t been fixed, but Ms Williams was charged $350 for a call-out fee. “They said ‘you have to pay for the maintenance’. I said ‘what maintenance?’ They never did anything to my house,” Ms Williams says. Glenys Williams says she was charged $350 for a call out fee for maintenance work that wasn't done.
Aaron Fernandes/SBS News

Local governments in the region say the neglect of state housing in Aboriginal communities can be such that houses need to be declared unfit for human habitation.

“Demolition of buildings in Aboriginal communities is definitely the last option – we don’t want to see that,” Shire of Leonora CEO Jim Epis says.

If the maintenance was carried out the way it should be, you wouldn’t declare them unfit for human habitation.

“If the maintenance was carried out on these houses the way it should be, you wouldn’t declare them unfit for human habitation. It’s just simple maintenance.

“They shouldn’t have to live the way they’re living there.”

For decades, Ninga Mia has been a meeting place for Indigenous people visiting Kalgoorlie from surrounding areas.

Now, blue crosses are spray-painted on fences around the community and mark houses chosen for demolition.

“The way they said it was, ‘we’ll get you a house in town and supply you with furniture’, and that’s it. They more or less tried to bribe everybody,” local resident Denis Yarran told SBS News. Mr Yarran lived at Ninga Mia for about 12 years and spent nine of those in a house that was recently bulldozed.

The state government says it is offering support to Ninga Mia residents to relocate elsewhere, part of its reform plan for communities around the state.

“To me, it looks like they had a plan. When someone moves out, they board it up [and don’t let anyone else in]. That was their aim, as far as I’m concerned, to knock them down,” Mr Yarran said. A spokesman for WA Aboriginal Affairs Minister Ben Wyatt says no Ninga Mia residents have accepted offers of support to leave as yet, but “some residents have indicated they may relocate in the future.”

“[In those cases] residents are provided wrap-around services to assist the transition, and may receive other fresh start packages such as furniture and white goods”.

Resident Tamisha Little says moving from the community into town would be detrimental to her family.

“We don’t want to move to town … Our kids will run wild, where will they end up?”

Ninga Mia Fellowship Church Pastor Geoffrey Stokes said the local community has not been properly consulted about the plans to demolish infrastructure and relocate residents.

“Who did they talk to? You heard people say that no one came and talked to them about it, they just saw houses being demolished,” he said. Documents obtained by SBS News appear to show the state government planned to facilitate the relocation of the community of Ninga Mia over a period of several months.

The DoC purportedly budgeted $865,000 for the demolitions and relocation of 56 residents, and appears to have planned to complete the process by June 2019, recommending that “when houses become vacant, they will be boarded up and demolished”.

Documents show “the community not wanting change” was considered as a potential risk to the project.

Not closing the community, the DoC appears to have advised, would lead to rising debt for WA.

Ninga Mia, “like other town-based reserves, is a site of continued social dysfunction with no governance, declining, aged and no longer fit for purpose infrastructure, [and] no system of community governance,” the documents read. It appears that while $630,000 was set aside for the demolition and removal of infrastructure, $180,000 was allocated for support packages to relocate residents.

The documents also warned that negative publicity of the policy could be damaging to the state government, so an extra $50,000 was budgeted for a communications plan, “should there be media, political or community interest in [the policy]”.

The DoC says it doesn’t know what the total cost of its reform agenda in 37 communities across the state will be, as it is still carrying out consultations.

“The total cost of implementing the state government’s town-based reserve policy, be that regularising services or supporting residents to relocate, cannot be determined until discussions with residents are complete,” DoC assistant director-general (strategy and transformation) Paul Isaachsen says.

“The government committed in its 2019-20 budget to additional investment this year … for all town-based reserves across the State.” 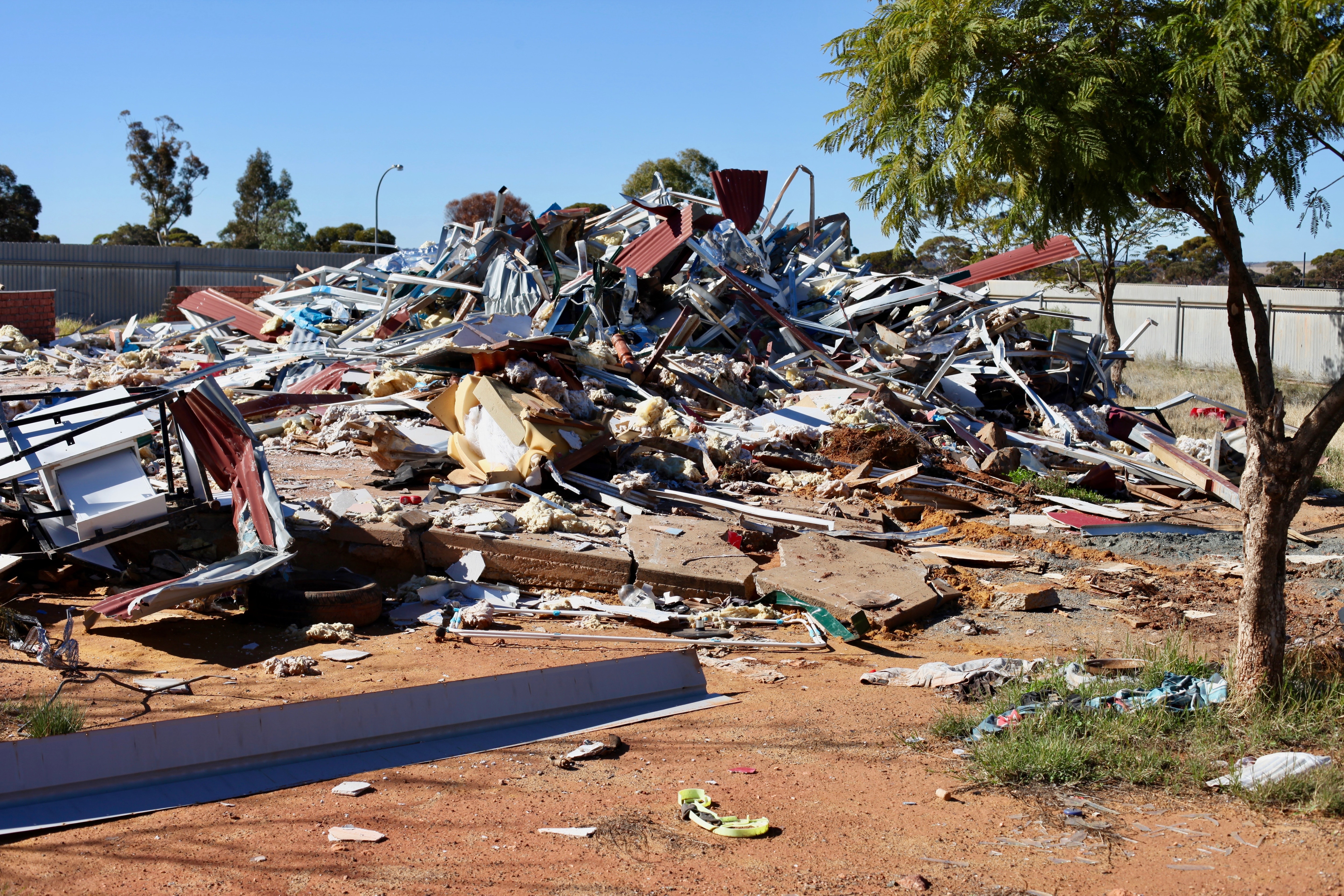 “These reserves were set up decades ago…the government will work with reserve residents to discuss either amalgamating the reserve into the town or supporting them to relocate elsewhere in the town,” he says.

“These decisions will be driven by residents and need to be approached sensitively as we know not all residents may agree to a single course of action.”

On the outskirts of the mining town of Leonora, residents of Katampul village are awaiting the results of their recent audit by the DoC’s Regional Services Reform Unit.

But they’re planning a long future in the village’s current location either way. “We have started working in the village office here, we’re trying to get something done for this community,” says Jennifer Narrier, a Katampul resident of 30 years.

“We’ve got kids that are growing up, they like to have a healthy house, healthy things like fruits and veggies around here.” Ms Narrier, along with several other residents, is planning community projects including a garden, new water tanks and solar power.

The group hopes they can show local and state authorities that they’re serious about staying and hope to see more done to fix problems with housing.

“Every house is having their own problems, cupboards all falling to pieces, trouble with the stoves and electrical, plumbing. It's dangerous, especially when kids are around,” Ms Narrier says.

“I hope in the future it’s a better place than how we’re sitting here today.”