The Newell Highway has fully reopened 12km north of Dubbo after a fatal truck crash that NSW Roads Minister Melinda Pavey described as 'an absolute horror'. 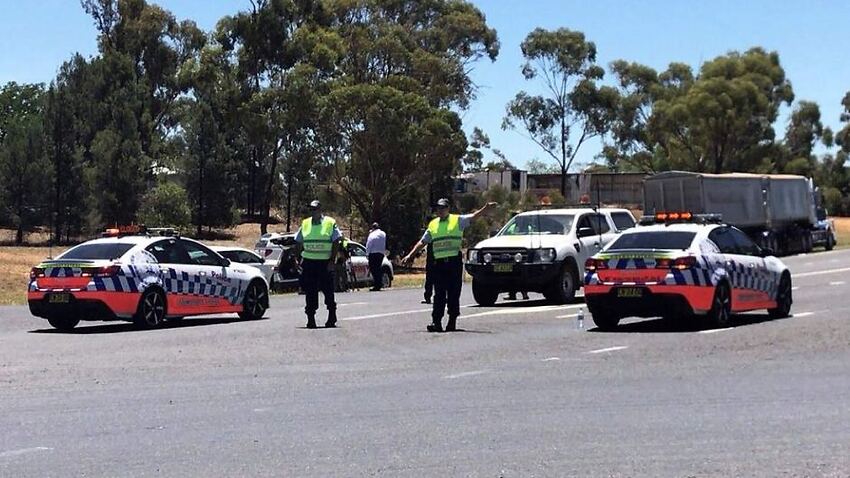 The Newell Highway has fully reopened near Dubbo following a horror crash involving four cars, a utility and two trucks, which the state's Roads Minister described as "an absolute horror".

A man and a woman, both aged 19, were killed on Tuesday afternoon when a semi-trailer ploughed into cars stopped at roadworks, injuring at least 10 others including a two-year-old girl, police say.

An 18-year-old man in another car suffered burns and was airlifted to Concord Hospital for treatment.

The driver of the semi-trailer, a 50-year-old man, suffered leg fractures and suspected internal injuries and was taken to Westmead Hospital.

Roads Minister Melinda Pavey is dismayed by the number of heavy-vehicle crashes on state's roads, with six trucks involved in deadly crashes in past three days, as the NSW road toll rises to more than 20.

The double fatality has taken the NSW road toll for 2018 to 21 people with Ms Pavey urging drivers to slow down, always wear a seatbelt and stay away from mobile phones.

"I have been both saddened and horrified for families across this state who have lost loved ones or been involved in these incidents," Ms Pavey said in a statement.