Adani has officially announced they will proceed on the first stage of the controversial Carmichael coal mine.

Adani has given the green light to start work on the controversial $16 billion Carmichael coal mine in Queensland's Galilee Basin.

The Indian mining giant's chairman, Gautam Adani, announced he had signed off on the mega mine in a statement on Tuesday.

"I am proud to announce the project has Final Investment Decision (FID) approval which marks the official start of one of the largest single Infrastructure - and job-creating - developments in Australia's recent history," Mr Adani said.

Pre-construction work on the polarising project, set to be the biggest in the southern hemisphere, is expected to begin in the September quarter.

Federal Resources Minister Matt Canavan said the project, including its proposed 389 kilometre rail line, would pave the way for further mines in the Galilee Basin.

"We have all benefited as a country from the development of the Bowen Basin, the Hunter Valley and the enormous amount of exports it delivers and the opening up of the basin is the next part," Mr Canavan said at the opening of Adani's Townsville offices.

"It is the first time we have opened up a coal basin in 50 years and if we can get it going, it will open more projects."

Opponents, however, warned the company still needs to secure billions of dollars in funding for the project. 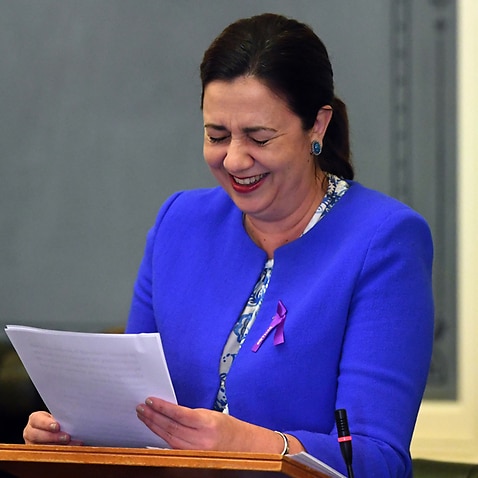 Adani to pay every cent: Palaszczuk

Australia's big four banks have distanced themselves from the project and the company has applied for a $900 million concessional loan from the Northern Australia Infrastructure Facility.

The mine has also faced fierce opposition from some traditional land owners and environmentalists who fear it will further damage the Great Barrier Reef.

"Adani is yet to lure any financial institutions willing to bankroll the project, which is proving hugely unpopular with the Australian public," Australian Conservation Foundation president Geoff Cousins said.

"If the federal government hands Adani $1 billion of public money for this destructive mine that will destroy our reef, we will consider all avenues, including legal action, to stop it."

Adani says the project will create 10,000 direct and indirect jobs, though opponents have challenged that claim.

The investment decision comes after a major internal spat within the state Labor government over a plan to allow Adani to avoid paying royalties during the early years of the mine's operation.

The government ultimately resolved a framework covering greenfield projects in the Galilee and Surat Basins and North West Minerals Province, that will ensure interest is paid on any deferred royalties.

"We are seeing the flow-on impacts of Adani right across regional Queensland," Ms Palaszczuk said.