EXCLUSIVE: It's claimed scrutineers tasked with checking votes in the 2016 election struggled to monitor the vote-counting process in some centres. Sources say the process was 'ridiculous' and 'too fast' to check accurately. 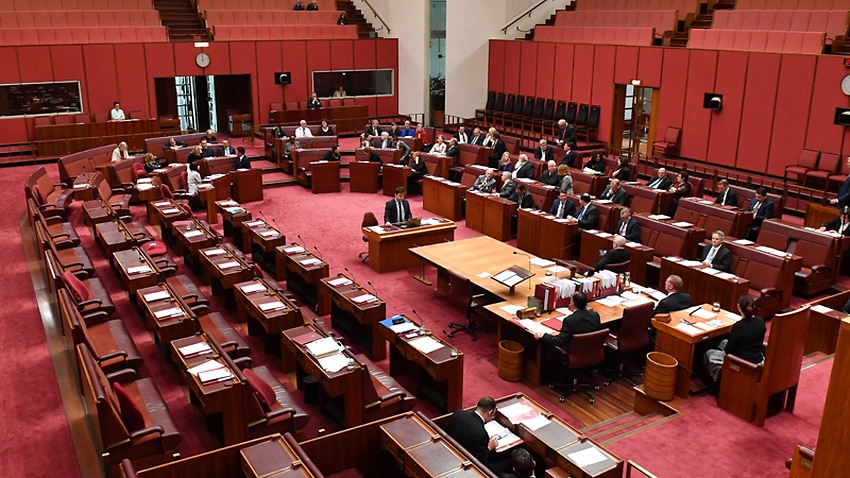 Scrutineers checking votes in the 2016 federal election were tasked with watching an average of 15 vote-counting machines each, a damning government audit has revealed.

Election workers from across the political spectrum described the vote-checking process as "ridiculous" and "impossible", with a small group of three or four volunteers struggling to watch as many as 60 screens simultaneously in one of the busiest counting centres, according to one Liberal scrutineer.

Under the Electoral Act, candidates can nominate scrutineers to watch AEC staff counting votes and check they are accurately recorded.

They are usually allowed one scrutineer per AEC vote counter.

But when the AEC rolled out a new system to scan and count Senate votes electronically in 2016, most of the machines were manned by Fuji Xerox staff on a government contract.

"The resulting ratio was approximately ... one scrutineer per 15 Senate scanning system users," Auditor General Grant Hehir concluded this week in an independent report.

"The AEC's approach may have complied with the Act, but diminished the extent of scrutiny that was applied to the count."

Gemma Whiting said she oversaw the Liberal Party's scrutineering efforts at the main counting centre in Western Australia, where she said there were "massive limitations" on the number of scrutineers allowed into the building, which was owned by Fuji Xerox.

Her requests to have one scrutineer watching each computer screen were repeatedly denied, with staff explaining the room would get "too crowded" and violate occupational health and safety rules (OHS).

"It was incredibly frustrating," she told SBS News.

If scrutineers failed to raise an objection before the staffer clicked "okay", she said there was no way to review the ballot paper.

"It was ridiculous. They would flick through, barely checking it. There was no way to adequately scrutineer it," she said.

Complaints about the process came from across the political spectrum.

Ms Whiting, who no longer works in politics, said scrutineer teams from One Nation, the Greens and the Nationals were having "similar issues" and would "compare notes".

Ben Raue, who writes a detailed elections blog, said he did a few hours work as a scrutineer in a NSW counting centre on invitation from the Greens.

"There was one room where you could scrutineer, while the same task was conducted in a bunch of rooms. [They] didn't even pretend you could be across it all," Mr Raue said.

Kevin Bonham, another elections analyst, said he worked as a scrutineer in Hobart, on the nomination of an unnamed candidate.

"There were never more than 4-5 scrutineers for all the Tasmanian candidates combined there at any one time (for around 30 screens)," Mr Bonham told SBS News. "At times, I was the only scrutineer there."

Most of this (thread) matches my experience. Effective scrutineering of all votes impossible + even checking votes one saw would be beyond most scrutineer's speed. https://t.co/R2aw9Lceem

How were the votes checked?

In written submissions to a parliamentary inquiry, the Greens complained that the extensive use of sub-contractors made “practical scrutiny of the count impossible".

Peter Brun said he worked as a scrutineer in Riverwood, in the south of Sydney.

"The process is just too fast," Mr Brun wrote in a statement to the Joint Standing Committee on Electoral Matters (JSCEM).

"My experience is that that staff and operators make it very difficult for scrutineers, even when I have explained that as scrutineers we are entitled to watch every stage of the process."

A spokesman for the AEC said accusations the results were not properly secured were "absurd" and the election was "successful".

"The AEC conducts the scrutiny in accordance with the Commonwealth Electoral Act 1918. Any changes to the Electoral Act are a matter for Parliament," the spokesman said.

In a letter responding to the Auditor-General's damning report, the AEC Commissioner Tom Rogers said he remained confident "the range of measures put in place for the 2016 federal election ensured the integrity of the Senate count".

The changes to Senate voting passed in 2016, made it possible for voters to number boxes above the line, dramatically increasing the number of manual preference votes.

Mr Brightwell, who oversaw the rollout of electronic voting NSW, said the increased load of data meant the use of automatic, digital counting was unavoidable.

"It's impossible for a human being to count it," he told SBS News.

But Mr Brightwell said the shift to digital counting would require a better checking process than the traditional method of scrutineers nominated by political parties.

He said there needed to be "independent auditors with the right skills" – possibly appointed by JSCEM, the cross-party parliamentary committee on elections.

He said there could not be proper scrutiny or auditing of the electronic count unless the AEC and Fuji Xerox published the source code that powered the software, using the example of elections in Norway.

"[The AEC] is very poor on issues of transparency," he said.

"They're saying essentially 'trust me'."