Hawthorn have opted to wear Adam Goodes' No.37 in their warm-up for an AFL game at the SCG in a show of support and respect for the dual Brownlow medallist. 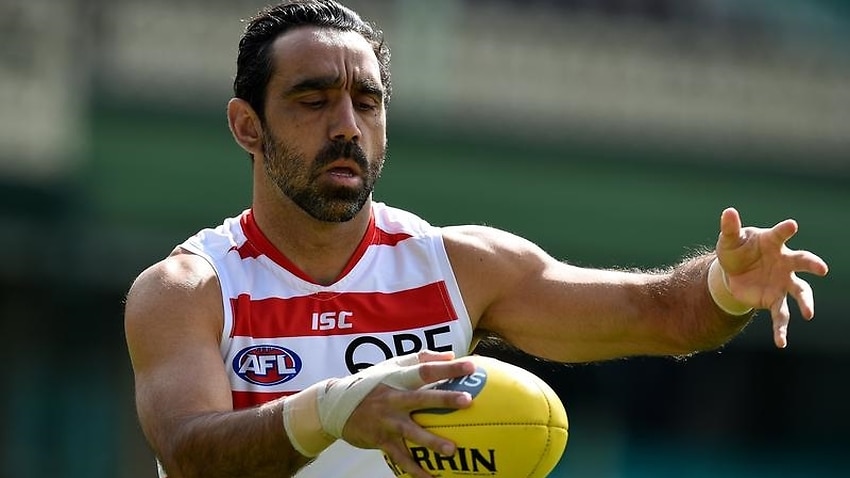 Sydney forward Will Hayward and Indigenous player Jarman Impey have praised Hawthorn's No.37 gesture as support for Adam Goodes in AFL circles continues to grow following the league's apology.

The release of Ian Darling's documentary "The Final Quarter", which uses archival footage to detail the final three seasons of Goodes' 372-game career, recently prompted the AFL to formally and unreservedly apologise for its failure to call out racism experienced by the Indigenous icon.

The Hawks have opted to wear Goodes' number on their backs during the team's warm-up for Friday's match against the Swans at the SCG as a show of support and respect for the dual Brownlow medallist.

Impey watched the film ahead of its release and wanted its anti-racism message to resonate with all Australians.

"We're trying to spread the message and it's very powerful," Impey said.

"Everyone as a nation should see it and learn about it to see what he had to go through about the racism he had to deal with."

"That's unbelievable from them. Hawthorn are a very respected football club and that sums them up. I'd say Goodesy will be humbled by that," Hayward said.

"He's an icon of the Swans. Always has been, always will be. Any chance we get to see Goodesy, it's always an honour."

Goodes is yet to speak publicly since the release of Darling's film, for which he played no role in production.

The 39-year-old, who watched the film by himself, and wife Natalie Croker last week celebrated the birth of their first child.

Goodes has rarely been sighted at AFL functions or games since retiring in 2015, when he didn't take part in the traditional grand final lap of honour.

AFL chief executive Gillon McLachlan naively suggested in recent years the Sydney great, booed across the country in the final stages of his career, would be an ideal candidate to become the league's first Indigenous commissioner.

The 2014 Australian of the Year never had any interest; Helen Milroy was appointed to the role last year.

The champion's disconnection from the sport he loved is a legacy of the period revisited in Darling's film, to be broadcast on national TV later this year.

Hawthorn great Shaun Burgoyne, a founding member of the AFL Players (AFLPA) Indigenous Players Advisory Board, was one of many stars moved by the documentary.

"Our response wasn't good enough ... obviously we can't turn back time," Burgoyne said in a statement on Thursday.

"But as we're playing Sydney in Sydney this Friday night, we thought it was a perfect opportunity to show our support for Adam publicly.

"We want to show that we're all beside him, united in stamping out racism."

AFLPA president Patrick Dangerfield has previously urged fans to watch the documentary, expressing hope it will "serve as a timely reminder of the devastation that racism inflicts."