Alec Baldwin has described the fatal shooting of cinematographer Halyna Hutchin with a prop gun as a "tragic accident". 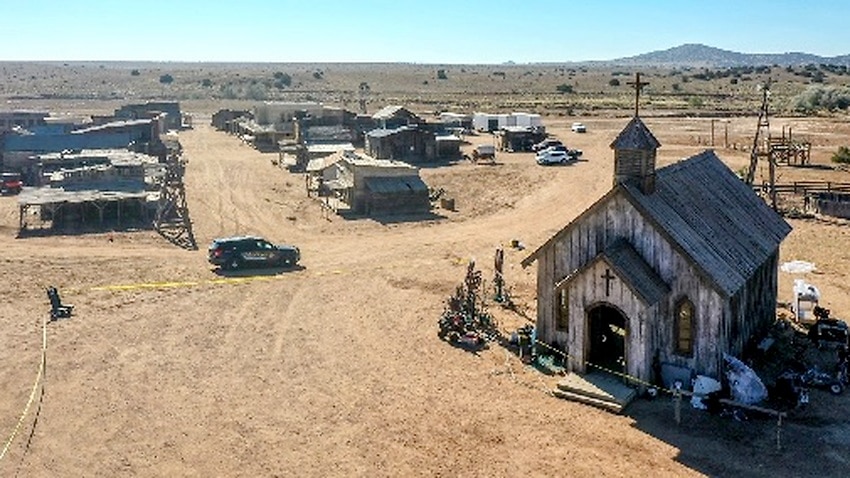 An assistant director unwittingly handed Alec Baldwin a loaded weapon and told him it was safe to use in the moments before the actor fatally shot a cinematographer, court records show.

"Cold gun," the assistant director announced, according to a search warrant filed in a Santa Fe court on Friday.

Instead, the gun was loaded with live rounds, and when Baldwin pulled the trigger on Thursday on the set of the western movie Rust, he killed cinematographer Halyna Hutchins. Director Joel Souza, who was standing behind her, was wounded.

The Santa Fe County Sheriff's Office obtained the warrant on Friday so investigators could document the scene at the Bonanza Creek Ranch outside Santa Fe where the shooting took place.

According to the records, the gun was one of three that the film's armourer, Hannah Gutierrez, had set on a cart outside the wooden structure where a scene was being acted.

Assistant director Dave Halls grabbed the gun from the cart and brought it inside to Baldwin, unaware it was loaded with live rounds, a detective says in the search warrant application.

Halls did not immediately return messages seeking comment and the Associated Press was unable to contact Gutierrez.

The warrant filing came as reports emerged of walkouts there earlier in the week over unsafe conditions.

The Los Angeles Times and Deadline Hollywood cited crew members and others close to the production as saying six or seven camera operators had walked off the set hours before the tragedy.

Both outlets also reported there had been at least one previous misfire with the prop gun.

Rust Movie Productions did not respond to a request for comment but said safety was its top priority and it was investigating.

Baldwin described the killing as a "tragic accident".

"There are no words to convey my shock and sadness regarding the tragic accident that took the life of Halyna Hutchins, a wife, mother and deeply admired colleague of ours. I'm fully co-operating with the police investigation," Baldwin wrote on his social media accounts.

"My heart is broken for her husband, their son, and all who knew and loved Halyna."

No immediate charges were filed, and a sheriff's spokesman said Baldwin was permitted to travel.

Images of the 63-year-old actor - known for his roles in 30 Rock and The Hunt for Red October and his impression of former president Donald Trump on Saturday Night Live - showed him distraught outside the sheriff's office on Thursday.

Guns used in making movies are sometimes real weapons that can fire bullets or blanks, which are gunpowder charges that produce a flash and a bang but no deadly projectile. However, even blanks can eject hot gases and paper or plastic wadding that can be lethal at close range.

In 1993, Brandon Lee, son of martial arts legend Bruce Lee, died at age 28 after being wounded by a prop gun while filming The Crow. Similar shootings have occurred involving stage weapons that were loaded with live rounds.

Gun safety on US sets had improved, said Steven Hall, a veteran director of photography in Britain. But he said one of the riskiest positions to be in was behind the camera because that person was in the line of fire in scenes where an actor appeared to point a gun at the audience.

After the shooting, production was halted. Baldwin is also a co-producer of Rust, which is set in 1880s Kansas. He plays the outlaw grandfather of a 13-year-old boy convicted of an accidental killing.