An operation to evacuate civilians and fighters from the last rebel-held parts of Aleppo has been suspended.

The Syrian government suspended the evacuation of civilians and fighters from the last rebel-held parts of Aleppo on Friday, leaving thousands of people trapped and uncertain of their fate. 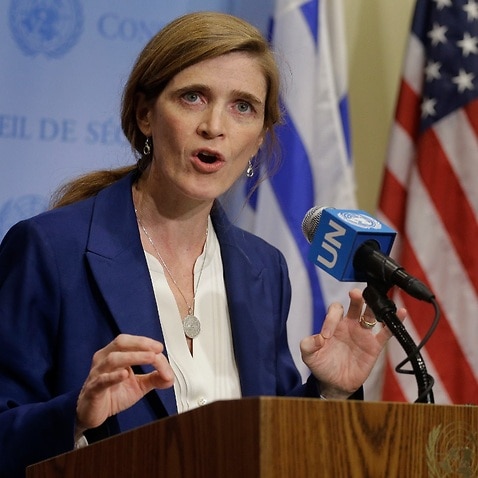 'Are you incapable of shame?': Watch US diplomat Samantha Power attack Syria, Russia and Iran over Aleppo 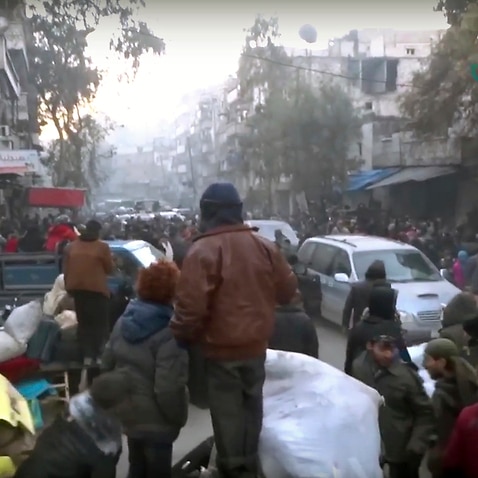 The Syrian government suspended the evacuation of civilians and fighters from the last rebel-held parts of Aleppo on Friday, leaving thousands of people trapped and uncertain of their fate.

The deal was put on hold shortly after President Vladimir Putin said Russia was "actively negotiating" with the opposition and seeking a nationwide ceasefire.

The delicate operation to bring the last civilians and rebels out of east Aleppo began on Thursday and had continued through the night, with thousands of people leaving in buses and ambulances.

But on Friday morning it was abruptly suspended, with the government accusing rebels of violating the terms of the deal brokered by its key ally Russia and opposition supporter Turkey.

"The evacuation operation has been suspended because the militants failed to respect the conditions of the agreement," a security source told AFP.

State television said: "The terrorist groups violated the agreement and tried to smuggle heavy weapons and hostages from east Aleppo."

The International Committee of the Red Cross, which has supervised the evacuation, confirmed "regretfully, the operation was put on hold".

"We urge the parties to ensure it can be relaunched and proceed in the right conditions," its regional head Robert Mardini said on Twitter. 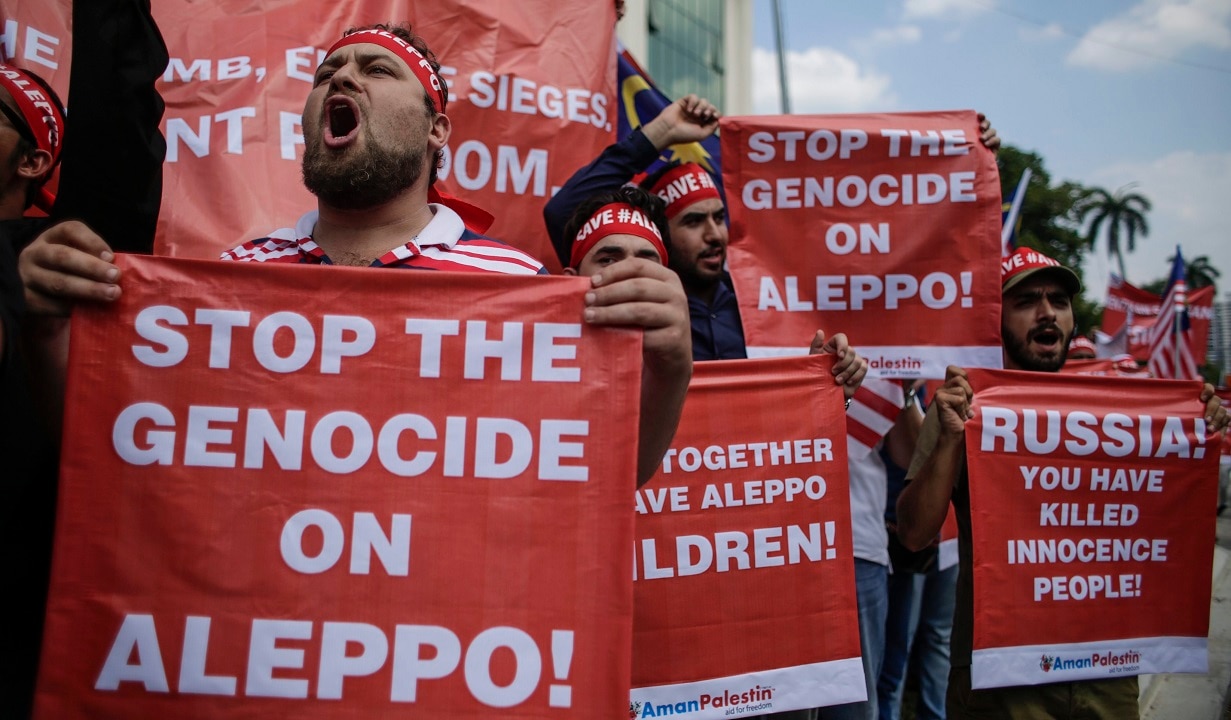 A protest in Malaysia, one of the many taking place throughout the world, urging more action to stop the fighting in Aleppo.
AAP

The opposition accused the government of suspending the operation in a bid to secure the evacuation of residents from two villages under rebel siege.

"The regime and its militias... stopped the evacuation operation in another attempt to involve Fuaa and Kafraya," said Yasser al-Youssef of the Nureddin al-Zinki rebel group.

Fuaa and Kafraya are Shiite-majority villages in Idlib province that have been under rebel siege since 2015.

The government and its other main ally Iran have reportedly sought to add an evacuation of civilians from the villages to the terms of the deal for Aleppo.

The Syrian Observatory for Human Rights, a Britain-based monitor, also said the suspension appeared to be related to the two villages.

It said pro-government fighters were blocking the road out of Aleppo that the evacuation convoy had been using.

The evacuation of the last pocket of rebel territory in Aleppo began on Thursday under a deal brokered by Russia and Turkey.

The operation had been scheduled to begin on Wednesday, but was delayed over government objections, including over Fuaa and Kafraya.

Clashes resumed for several hours before the deal was revived, and on Thursday afternoon buses and ambulances began transporting evacuees to rebel territory in the west of Aleppo province.

The evacuations ran through the night, with people leaving in private vehicles as well the green government buses and ambulances that initially transported residents and rebels.

Initially, evacuees were leaving via a single convoy that travelled back and forth between Aleppo and the west of the province.

But overnight, the vehicles began returning individually to collect more evacuees as soon as they had dropped off their passengers.

The Observatory estimated some 8,500 people had left before the operation was suspended, including around 3,000 rebel fighters.

Syrian state media reported a figure of around 8,000. 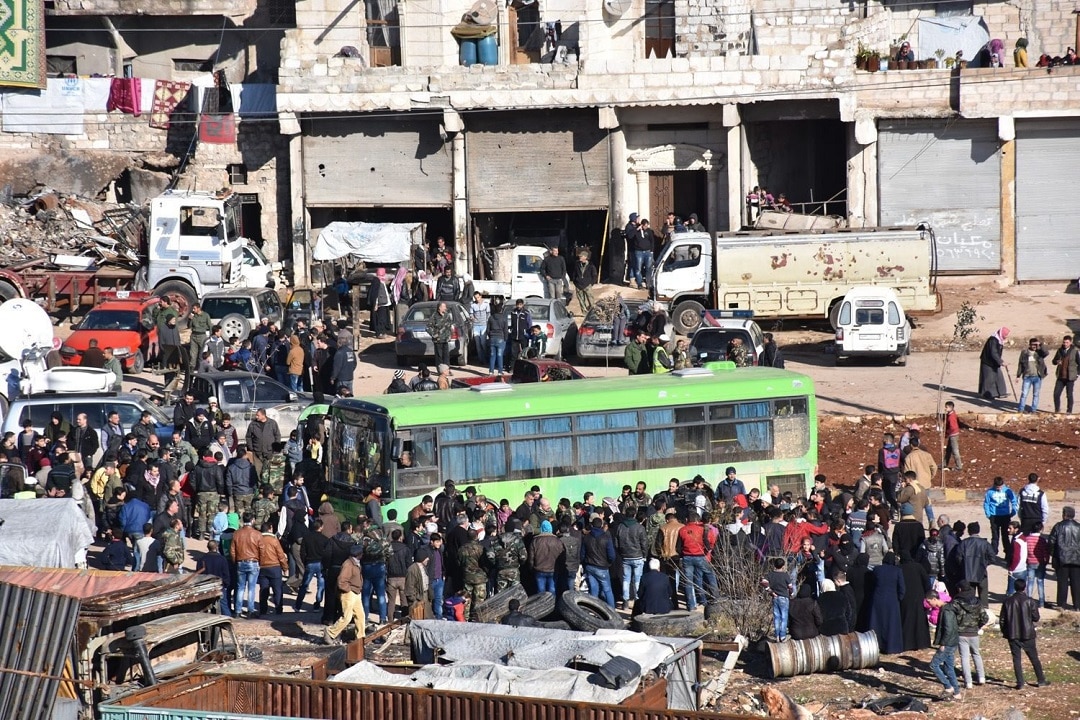 The green buses that had earlier helped in the evacuation of residents out of Aleppo.
AAP

'History in the making'

Ahmad al-Dbis, a doctor helping coordinate the evacuation of the wounded, said at least 500 evacuees had wounds or illnesses requiring medical attention.

From a gathering point near the town of Khan al-Aasal, people were travelling further west, heading either to camps for the displaced or to stay with relatives or friends.

The departures began a month to the day after government forces launched a major offensive to retake all of Aleppo and secure the regime's biggest victory in more than five years of conflict.

In a video message to Syrians on Thursday, President Bashar al-Assad said the "liberation" of Aleppo was "history in the making".

But US Secretary of State John Kerry said what had already happened in the city was "unconscionable", raising concerns for the "tens of thousands of lives that are now concentrated into a very small area of Aleppo".

The UN Security Council will meet later on Friday to discuss a French call for international observers to monitor the evacuation and ensure aid deliveries.

The UN estimated around 250,000 people were living in rebel east Aleppo when the government assault began in mid-November, although officials have since acknowledged that figure might have been incorrect.

As the army advanced, tens of thousands of people crossed to parts of the city held by either the government or Kurdish forces.

UN envoy Staffan de Mistura said on Thursday that perhaps 50,000 people remained in the last rebel-held districts, 40,000 of them civilians. 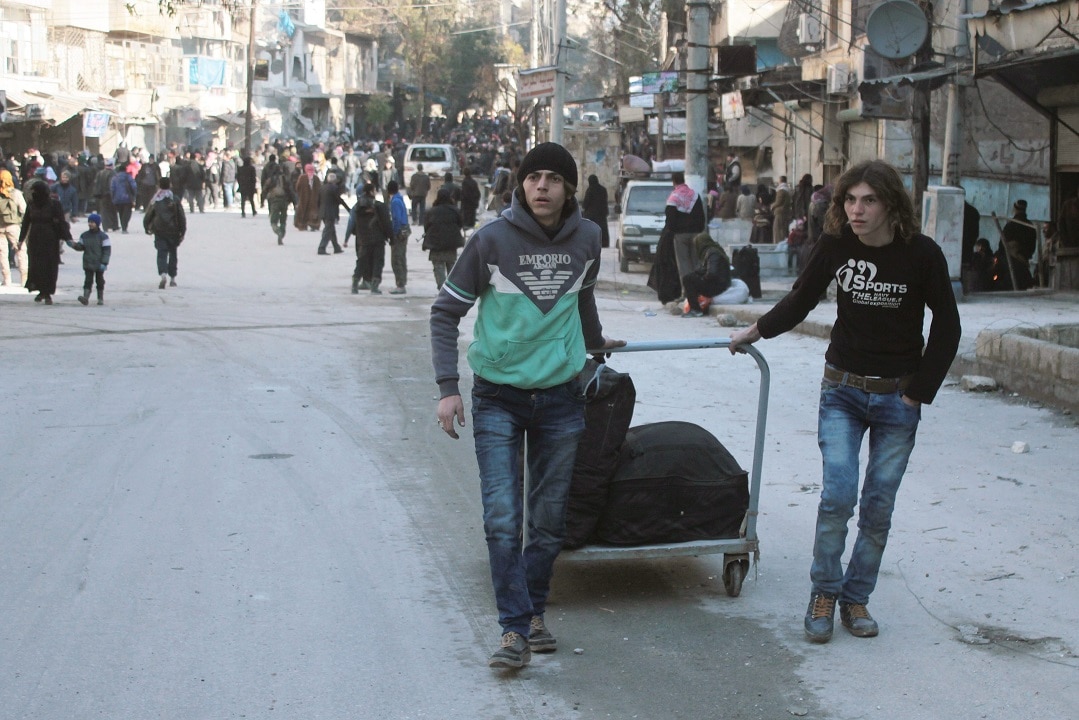 Two Syrians pull their baggage during the evacuation of Aleppo.
AAP

The evacuations have been emotional for departing residents who were desperate for relief after months of bombardment and siege but tearful at the prospect of potentially permanent exile.

In the dust on the window of one of the buses departing Thursday someone had traced: "One day we will return".

"People are faced with impossible choices. You see their eyes filled with sadness."

More than 310,000 people have been killed since the conflict began with anti-government protests in 2011, and over half the population has been displaced, with millions becoming refugees.

Diplomatic efforts -- including several rounds of peace talks in Geneva -- failed to make headway in resolving the conflict, which saw a turning point last year when Russia launched an air war in support of Assad.

Putin said on Friday that Moscow was negotiating with the rebels through Turkish mediators.

"The next step (after Aleppo) will be to reach agreement on a complete ceasefire across all of Syria," he said.

He added that the parties were proposing fresh peace talks, possibly in Kazakhstan.