Alex needed to marry his fiancée to get her a visa - but they were 15,000km apart when coronavirus hit

Long-distance relationships can be challenging at the best of times, but for Australian-Belarusian couple Alex Eagles and Katya Slepneva, 2020 has proved their ultimate test. 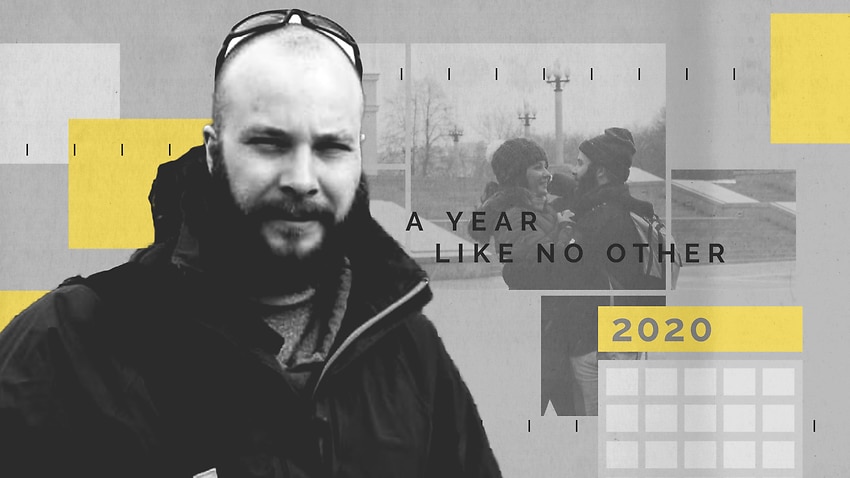 Sydney man Alex Eagles knew he wouldn’t see his Belarusian fiancee Katya Slepneva for a couple of months when he flew home after visiting her in February.

But the 28-year-old didn’t realise he might not see her again this year.

The couple met at a museum in Germany three years ago while travelling. They were both looking at a radar telescope which neither of them knew much about, but they soon fell in love.

The couple didn't expect to be apart for so long. Source: Supplied

In 2019, Katya, who is from the Belarusian capital Minsk, applied for a Prospective Marriage visa which allowed her nine months in which to come to Australia and marry Alex. It seemed like a reasonable amount of time to get organised - until the COVID-19 pandemic hit.

“The week before the borders closed, we got notice that she had received a visa [to be able to travel],” Alex tells SBS News. It gave Katya, 23, until December to get to Australia and, like many, the couple thought the international border closures would only be temporary.

“Our original plan was that she would continue studying for a couple more months and then she would hop on a plane and come to Australia,” Alex says.

Our original plan was that she would hop on a plane and come to Australia.

In July, once Katya completed her studies, the couple began applying for a travel exemption.

“It was literally a box that said ‘Do you have a visa? Tell us why you need to come to Australia.' And so we thought, ‘this is going to be an easy process’.”

But three rejected applications later, they started to panic.

Alex longed for Katya to be able to join him in Sydney. Source: Supplied

In August, Katya was finally granted an exemption, and she booked her flight, only to be informed 10 days later it was a mistake.

“That was pretty horrible,” Alex says.

The protests led to violent crackdowns by Belarusian security forces that the United Nations Human Rights Council described as contributing to a cycle of serious human rights violations.

“[Katya] ran from police three or four times  ... people were just taken in front of her and she would just run,” Alex says.

When the country's president Alexander Lukashenko was re-elected for a sixth term in August, it caused more social unrest and the government cut off the entire country’s internet and cellular connection.

It worried the couple, who were used to speaking for three or four hours a few times a week.

Alex says long-distance relationships have their pros and cons.

“You yearn for each other,” he says, “[but] comparatively, you don't get to see them on the way to the kitchen”.

You yearn for each other, but you don't get to see them on the way to the kitchen.

To keep each other staying positive, they played games together when they could online.

“We decided that would end up being a way for us to kind of… just be there with each other,” Alex says. “Just talking with your partner, I don't think … especially over a long period of time, is enough to remain close and intimate.”

And their commitment to one another, eventually, paid off.

Nine months after last seeing each other - and six exemption applications later - Katya was approved to travel to Australia and arrived in Sydney in mid-November, just before her visa ran out.

“Just seeing her and calling when she actually got into the hotel room for quarantine was this moment of like, ‘Oh, yes, finally!’” Alex says.

“It was very emotional for her ... For me, it was just this immense relief.”

After two weeks of quarantining, they were finally reunited and got married this month in front of a few close friends and family members.

Katya made it to Sydney and the couple got married this month. Source: Supplied

It’s been an extremely emotional year, Alex says, “just ... seeing each other knowing that there's no time limit”.

It's also made them stronger.

“[We’ve] definitely got a lot better with regards to talking through things and unpacking emotions a lot more.”

And while Alex recognises Katya leaving her family and not knowing when she can travel again may make 2021 tough, he says they will deal with it together.

“She's here. And now we can do whatever we want.”

Caitlin Hughes is from the northern suburbs of Sydney and spent 2020 studying her first year of a Bachelor of Communication, some of it remotely. She is looking forward to returning to campus again in 2021 and hopefully travelling.

Read More
Coronavirus cancelled Tainga's big stage debut. Now he'll star in the must-see show of 2021
Read More
Alex needed to marry his fiancée to get her a visa - but they were 15,000km apart when coronavirus hit
Read More
2020 has been tough for nurse and activist Teresa, but fighting for her community is everything
Read More
After losing his legs in a car accident, Khoa wasn't going to let the pandemic beat him
Read More
Australian Olympic hopeful Tiffany put her life on hold for 2020, then the pandemic hit
Read More
Alex became a parent unexpectedly. He's cherished having family time in lockdown
Read More
2020 made Samantha famous. Now she's using her platform to support LGBTIQ+ couples
Share
Published 22 December 2020 at 5:05pm
By Caitlin Hughes
Topics
CoronavirusAustralia