Ahead of G7 talks in the United Kingdom this week, the prime minister will not make any fresh climate commitments, saying Australia does not support "false deadlines for phasing out specific energy sources". 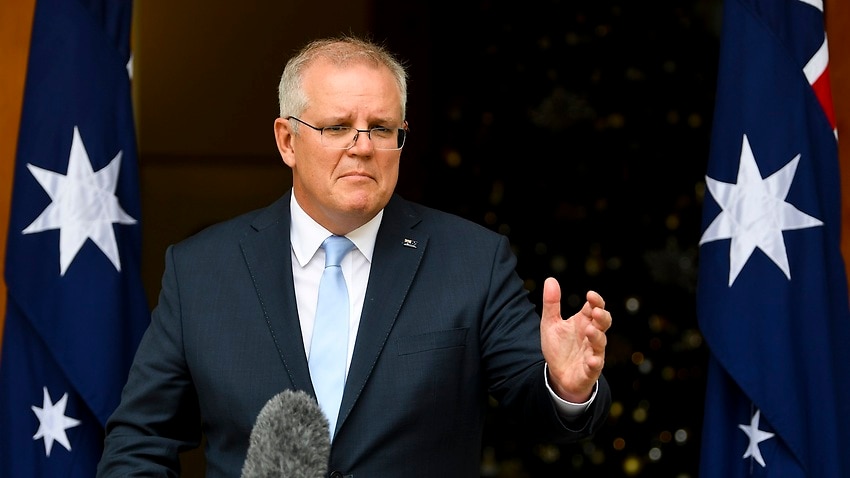 Scott Morrison is pushing back against global pressure to set more ambitious emissions targets, saying the government will continue to support a "technology-focused" approach to tackling climate change that preserves growth and jobs.

The prime minister defended Australia's climate record in a foreign policy speech ahead of G7 talks in the UK this week that outlined "areas of Australian advocacy and agency", including heightened competition in the Indo-Pacific region and efforts to identify the origins of the coronavirus pandemic.

Australia is not a member of the G7 but is among four countries invited to attend as guests.

In the speech to the Perth USAsia Centre on Wednesday, Mr Morrison did not make make any new commitments to lift the country's climate targets, saying "ambition alone won't solve the problem of actually reducing emissions".

"As I've said previously, Australia is on the pathway to net zero. Our goal is to get there as soon as possible, preferably by 2050, through technology that enables and transforms our industries, not taxes that eliminate them and the jobs and livelihoods they support, especially in our regions," he said.

The Australian government remains committed to reducing emissions by 26 to 28 per cent below 2005 levels by 2030, despite the United States and other countries hiking their targets at a recent global climate summit.

In the speech, released to media outlets in advance, Mr Morrison said Australia "does not support setting sectoral targets or timeframes for decarbonising particular parts of our economy or setting false deadlines for phasing out specific energy sources".

"It is important that nation states be accountable for charting their own path to net zero based on their unique economic structures and energy sources," he said.

"Australia will continue to be a strong voice for a technology-focused approach, and for countries to work together to drive down the cost of low-emissions technologies."

The prime minister also pushed back against acting "combatively through protectionist measures", saying Australia's approach "will ensure that emissions abatement doesn’t come at the cost of growth and jobs”.

Heightened competition in the Indo-Pacific

In his speech, Mr Morrison also stressed the importance of helping nations in Australia's region to build projects that don't create crippling debt burdens amid the continued rise of China.

Mr Morrison said that regional infrastructure that comes with onerous conditions or is too expensive isn't worth having.

"Projects should be high quality - and affordable," he said.

"They should meet real need, and deliver sustainable economic benefits. And they should not compromise countries' resilience or sovereignty."

He believes G7 countries and Australia should play a crucial role in providing alternative sources of finance for poorer nations.

"Absent this safety net and transparency, our neighbours face obstacles to open economic development and can become vulnerable to debt diplomacy," he said.

Read More
'There will be those who seek to divide us': Scott Morrison and Jacinda Ardern present united front on China

China critics accuse the superpower of trapping developing nations in infrastructure project loans that tip the power balance against them.

Mr Morrison also warned the international rules-based order is under threat with the world in a similar state of flux as it was in the aftermath of World War II.

"The risks of miscalculation and conflict are growing. And the technological edge enjoyed historically by Australia and our allies is under challenge," he said.

"The most practical way to address economic coercion is the restoration of the global trading body's binding dispute settlement system," Mr Morrison said.

"Where there are no consequences for coercive behaviour, there is little incentive for restraint."

Australia is also backing US President Joe Biden's push to bolster and accelerate efforts to identify the origins of the coronavirus pandemic.

The Morrison government's strong support for an inquiry into the virus angered Beijing and further damaged strained relations.

"Having led calls for an independent inquiry, it remains Australia's firm view that understanding the cause of this pandemic is essential for preventing the next one, for the benefit of all people," Mr Morrison said.

Mr Morrison will on Thursday travel to the G7 via Singapore where he is due to discuss military cooperation, regional security and coronavirus with Prime Minister Lee Hsien Loong.

Both countries are keen on a regional travel bubble, but it is understood an announcement is still some way off.

During the trip, Mr Morrison is also expected to hold talks with UK Prime Minister Boris Johnson with free trade negotiations in focus.