Democrat Joe Biden has appeared with his running mate Senator Kamala Harris, who has accused President Donald Trump of leaving the nation "in tatters". 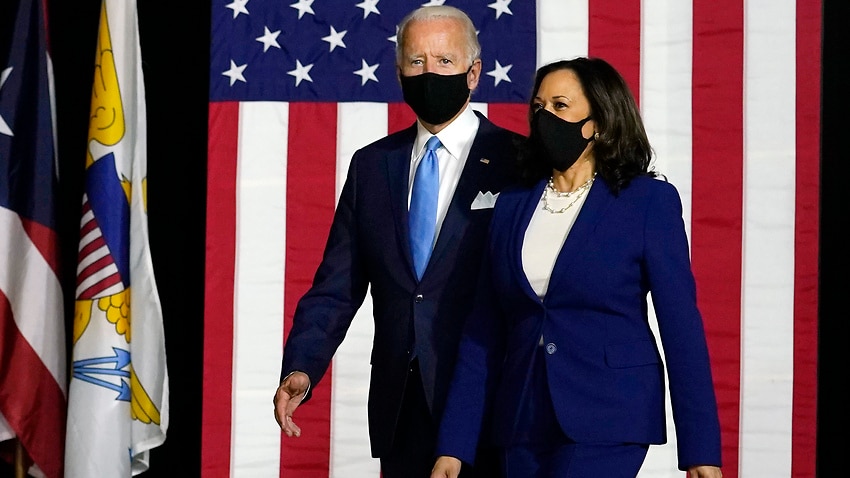 Joe Biden and Kamala Harris have launched their joint bid for the White House, with the vice presidential nominee saying Americans are "crying out for leadership" to overcome a triple crisis of health, racial injustice and a ravaged economy.

Making their first appearance as running mates before a small crowd of reporters and staffers at a Delaware high school closed to the public due to coronavirus concerns, the Democratic duo vowed to end Donald Trump's presidency and, in Biden's words, "rebuild this country".

"Everything we care about," said Ms Harris. "It's all on the line."

A formidable 55-year-old US senator from California and a daughter of immigrants, Ms Harris has already made history as the first woman of colour tapped for a major party presidential ticket.

Describing a country at the crossroads, she left little doubt of her determination to go on the attack, saying Mr Trump "just isn't up for the job" and has left the nation "in tatters."

"America is crying out for leadership, yet we have a president who cares more about himself than the people who elected him," said Ms Harris.

Despite the awkwardly intimate setting, a far cry from the typical campaign rollout featuring an audience of thousands, Ms Harris appeared telegenic and confident in her first speech as vice presidential nominee - for which she and Mr Biden both arrived wearing facemasks.

"The case against Donald Trump and Mike Pence is open and shut," said the former California attorney general as she assailed the president's "failures of leadership" on containing the deadly pandemic and reviving a hobbled economy.

We need more than a victory on November 3rd. We need a mandate that proves that the past few years do not represent who we are or who we aspire to be. Chip in now to make that happen: https://t.co/XBTwRmxAem

The daughter of Indian and Jamaican immigrants to the United States sought to tap into the nationwide upheaval over police violence and racial disparities.

"We're experiencing a moral reckoning with racism and systemic injustice that has brought a new coalition of conscience to the streets of our country demanding change," she said.

For Mr Biden - who leads Mr Trump in most national polls and in swing states like Florida and Wisconsin despite conducting the campaign mostly from his Wilmington home - his VP reveal marks a crucial moment as he aims to build a broad coalition of voters to defeat Mr Trump.

Mr Biden spoke of why he chose Ms Harris as his partner, stressing she was a tough and experienced legislator who is "ready to do this job on Day 1."

He said that Ms Harris' story as the child of immigrants and a woman of colour who fought her way to the top ranks of US legal and political circles would inspire the country.

He said Ms Harris was an inspiration to the country's young girls of colour.

"This morning, little girls woke up across this nation - especially Black and Brown girls who so often may feel overlooked and undervalued in our society - potentially seeing themselves in a new way: As the stuff of Presidents and Vice Presidents."

This morning, little girls woke up across this nation — especially Black and Brown girls who so often may feel overlooked and undervalued in our society — potentially seeing themselves in a new way: As the stuff of Presidents and Vice Presidents.

Mr Biden also laced his remarks with optimism about the future, promising that a Biden-Harris administration will do what it takes to "turn the corner on this pandemic".

The Biden-Harris ticket already strikes a contrast with 2016, when nominee Hillary Clinton and running mate Tim Kaine struggled to unite a Democratic Party weakened by infighting between her supporters and those of progressive candidate Bernie Sanders.

Ms Harris's politics are to the left of Mr Biden's, but the pair have made a point of highlighting their shared values and goals - despite their clashes during the primaries last year.

She is the first Indian American to be a presidential running mate, personifying the diversity seen as key to building enthusiasm for the Democratic ticket - and black lawmakers and activists were largely thrilled with the pick.

Ms Harris, who is two decades younger than Mr Biden and Mr Trump, could appeal to younger voters and women, particularly those in the suburbs who have been fleeing the Republican president, according to polling.

Mr Trump, who last month acknowledged Ms Harris would be a "fine choice" for Mr Biden, attacked her following Tuesday's announcement as "nasty" and a radical leftist who would implement "socialised medicine" and confiscate Americans' guns.

.@KamalaHarris started strong in the Democrat Primaries, and finished weak, ultimately fleeing the race with almost zero support. That’s the kind of opponent everyone dreams of!

Mr Biden sniped at the presidents' attacks, asking if anyone was "surprised Donald Trump has a problem with a strong woman?"

"If I were watching this @KamalaHarris rollout in the WH, I'd be deeply concerned. She nailed it. And them," he tweeted.  "Not 'nasty.' Powerful."

If I were watching this @KamalaHarris rollout in the WH, I’d be deeply concerned. She nailed it. And them.
Not “nasty.” Powerful. https://t.co/6RCDdAuRxu

For Ms Harris, being elevated onto a presidential ticket is political gold. If she and Mr Biden win, the telegenic but tough Ms Harris would almost certainly become the 2024 or 2028 Democratic presidential frontrunner.

Mr Biden would be the oldest person to take the office, and there is broad speculation that he would serve one term and prepare his deputy to succeed him.