Christian conservatives and anti-abortion activists have praised the choice, while Democrats and abortion rights groups say they fear the pick could result in a winding back of civil rights and liberties. 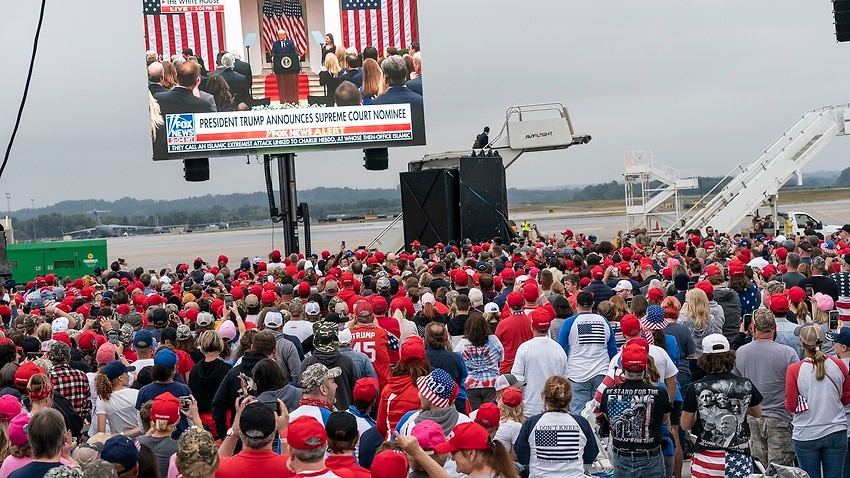 Amy Barrett has said previously she is able to make the distinction between her faith and her duties as a judge. Source: AAP

Democratic presidential candidate Joe Biden and others in his party on Saturday blasted President Donald Trump's choice of conservative judge Amy Coney Barrett for the Supreme Court, focusing in particular on the threat they said she would pose to healthcare for millions of Americans.

Mr Biden noted that even as Trump's administration is seeking to strike down Obamacare in a case the Supreme Court is due to hear on 10 November, Judge Barrett has a "written track record" criticising a pivotal 2012 ruling authored by Chief Justice John Roberts preserving the law formally known as the Affordable Care Act.

Judge Amy Coney Barrett applauds as President Donald Trump announces her as his nominee to the Supreme Court. Source: AAP

Mr Biden, seeking to defeat the Republican president on Nov. 3,called on the Senate not to act on the court's vacancy caused by the death of liberal Justice Ruth Bader Ginsburg until after the Nov. 3 election, allowing the winner to make the appointment.

"The United States Constitution was designed to give the voters one chance to have their voice heard on who serves on the court. That moment is now and their voice should be heard," Mr Biden said.

Mr Trump's choice means that he would replace Ginsburg, a champion of gender equality and other liberal causes who died on 18 September at age 87, with a jurist who in many ways is her judicial opposite.

If confirmed, Ms Barrett would give the court a 6-3 conservative majority. The implications for contentious issues such as abortion, LGBT rights, gun-control measures and healthcare has prompted passionate reaction on both sides.

Democrats said Ms Barrett would vote to dismantle healthcare during a coronavirus pandemic that already has killed more than 200,000 Americans.

"This nomination threatens the destruction of life-saving protections for 135 million Americans with pre-existing conditions together with every other benefit and protection of the Affordable Care Act," House of Representatives Speaker Nancy Pelosi said.

Mr Trump wants Ms Barrett confirmed before the election. If so, she would be on the bench for the Obamacare oral arguments, with Republican-led states and Mr Trump's administration trying to invalidate the law. A coalition of Democratic-led states is seeking to preserve the law in the litigation.

Republicans hold a 53-47 Senate majority and have committed to moving quickly on confirmation. They cheered Mr Trump's choice.

"President Trump could not have made a better decision," Senate Majority Leader Mitch McConnell said.

Senator Lindsey Graham, chairman of the Judiciary Committee that will conduct confirmation hearings, added, "We move forward on this nomination knowing that the president has picked a highly qualified individual who will serve our nation well on the highest court in the land."

Critics of Donald Trump have also expressed concern that a hasty confirmation process so close to an election risks further eroding the court's reputation as independent.

But Christian conservative and anti-abortion activists, who praised the choice, urged senators to move quickly and warned Democrats not to attack Ms Barrett's religious faith.

"We have full confidence that the pro-life Senate majority will move swiftly to confirm her before the election," said Marjorie Dannenfelser, president of Susan B. Anthony List, an anti-abortion group that is launching a digital advertising campaign supporting Ms Barrett.

Abortion rights groups said Ms Barrett's addition to the court could jeopardize the landmark 1973 ruling that made abortion legal nationwide.

"The Supreme Court has a vital role in protecting and upholding civil rights and liberties - including reproductive rights - for everyone in the United States. We cannot barrel forward with a nomination that will impact people's lives for generations," said Nancy Northup, president of the Center for Reproductive Rights.