Authorities say another 200 pilot whales have been discovered stranded off Tasmania's west coast, with the majority likely to be dead. 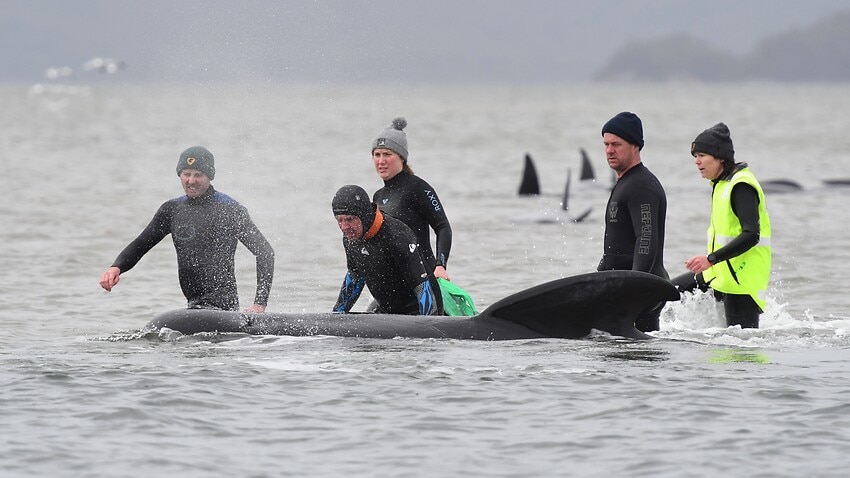 Another 200 pilot whales have been discovered stranded on Tasmania's remote west coast and rescuers say the majority have likely died.

It takes the overall number of stranded whales at Macquarie Harbour to about 470 after a 270-strong pod was found stuck on sandbars on Monday.

Parks and Wildlife regional manager Nic Deka said the newly found whales are about 7-10km away from the first group.

"From the air, most appear to be dead," he told reporters on Wednesday.

Here’s what we know:

- around 25 have been saved, but some have re-stranded

- many others have already died

- the rescue effort will continue for days pic.twitter.com/eHRvgYvoV2

Further assessments of their condition will be undertaken.

"It's a good distance from the stranding we've been focused on and not necessarily a place that is obvious for a stranding," Mr Deka said.

Authorities are racing to save a pod of whales stranded in Tasmania. Source: Sarah Maunder/SBS News

Rescuers have been able to guide about 30 whales from the initial group back out to sea but several of those have again become stuck.

About a third of the 270-strong group are believed to have died, with more information expected to be known about their condition later on Wednesday.

Experts have labelled the operation "one of the trickiest" due to the number of animals and unique tides in the area.

Another 200 pilot whales have been discovered stranded off Tasmania's west coast. Source: THE ADVOCATE

Marine Conservation Program wildlife biologist Kris Carlyon said the highly social pilot whales could be heard calling out to each other in distress.

The pod may have been drawn into the coast to feed or by the misadventure of one or two, he said.

Authorities are also deliberating how to handle the grim task of getting rid of the carcasses.