The presidential hopes of Donald Trump and Joe Biden are hanging in the balance as the result boils down to a small number of key battlegrounds. 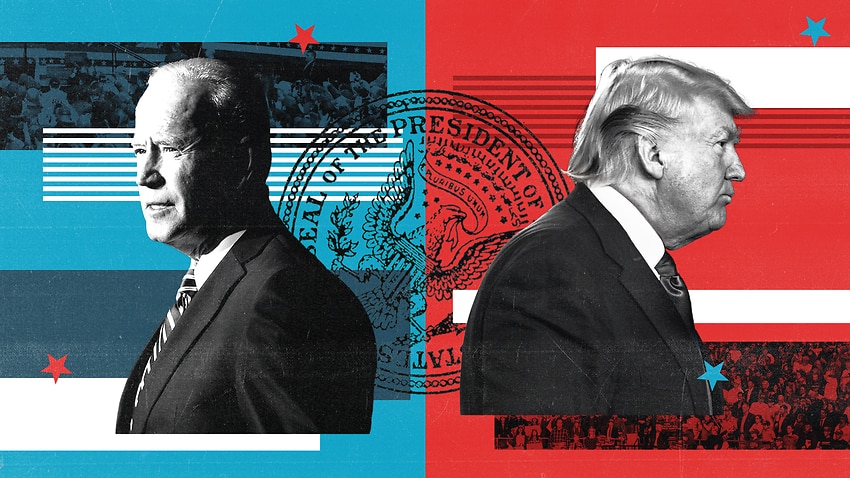 The contest between Joe Biden and Donald Trump is coming down to the wire. Source: SBS News.

The unpredictable and chaotic US presidential election is approaching a fitting climax with a small number of crucial swing states holding the key to victory for Donald Trump or Joe Biden.

Both Mr Biden and Mr Trump clung to their chances of victory as they called an end to campaigning on Wednesday evening (AEDT).

However, by early on Thursday morning (AEDT) Mr Biden appeared to be taking a slim lead in the pivotal states of Wisconsin and Michigan.

"We expect to win Michigan. We expect the final results to be today."

Joe Biden confident at the end of election day

As Mr Biden's campaign started to talk up his chances of victory, Mr Trump lashed out on Twitter - stoking fears that he will try to de-legitimise the result if he loses.

"Last night I was leading, often solidly, in many key states," he wrote.

"Then, one by one, they started to magically disappear as surprise ballot dumps were counted. Very strange."

Earlier, in a White House press conference, Mr Trump talked up his chances of victory while lashing out with baseless claims of voter fraud.

“This is a fraud on the American public,” the president said during his speech.

“This is an embarrassment to our country.”

The Biden campaign said Mr Trump's comments were a "naked effort to take away the democratic rights of American citizens".

"It was unprecedented because never before in our history has a president of the United States sought to strip Americans of their voice in a national election," the Biden campaign said in a statement.

"And it was incorrect because it will not happen. The counting will not stop. It will continue until every duly cast vote is counted."

Adding to the tension was confusion over the reporting of key results by US media.

I will be making a statement tonight. A big WIN!

But as both sides held on to states they were expected to win, the number of remaining states yet to declare dwindled, pointing to an ever-tighter end game and growing potential for disputes to end up in the courts.

At times, US media organisations that analyse the data and pronounce winners added to the sense of uncertainty.

There was huge buzz over Fox News' announcement that Mr Biden had won a crucial victory in the previously Trump-held state of Arizona.

However, It was hours before other US media were prepared to make the same call, although Mr Biden was eventually declared the consensus winner.

What seemed likely was that Americans would at least not see a landslide that Democrats had dreamed they might pull off if they could open with a win in Florida.

Instead, analysts said the tit-for-tat victories in states across the huge country could finally whittle down a final fight over just a handful of swing states - especially Pennsylvania.

However, Pennsylvania and Georgia were among the states where vote counting was going more slowly, complicated this year by the huge number of mail-in ballots.