An anti-racism group say they will "defend" a Melbourne city council from far-right protesters, who plan to storm their meeting.

Far-right groups threatening to storm a Melbourne council meeting could face off against anti-racism protesters, who plan to "defend" the councillors who voted to scrap Australia Day ceremonies.

Campaign Against Racism and Fascism will attend the Yarra City Council meeting on Tuesday night in case far-right protesters attempt to enter it.

When the council convened in September, about eight protesters from the Party for Freedom donned Australian flags and signs, shouted chants and temporarily shut down the meeting. 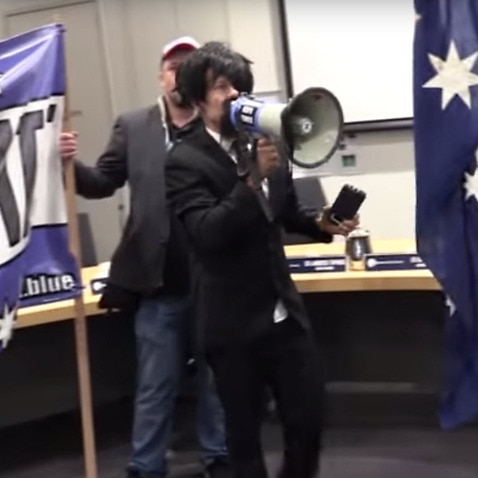 Both councils have scrapped references to January 26 as Australia Day, with Yarra City Council voting to move its traditional citizenship and citizen-of-the-year award ceremonies.

The federal government responded by stripping the council of its ability to host any citizenship ceremonies.

The far-right groups want both councils to reverse their Australia Day decisions.

"Their aim is to stop the councils from operating until the councillors reverse their decision, and to spread racist propaganda in the process," Anti-racism campaigner Tess Dimos said on Tuesday.

"We will make sure there are people on site to combat their racism, to defend the councils and ensure the side of anti-racism is larger, stronger and louder."