A freak cyclone destroyed Ian's pub. A warming climate could mean more are on their way

When Cyclone Seroja unleashed on Western Australia earlier this year, many residents experienced a freak weather event for the first time. Weeks later, they are learning of the storm’s true cost. 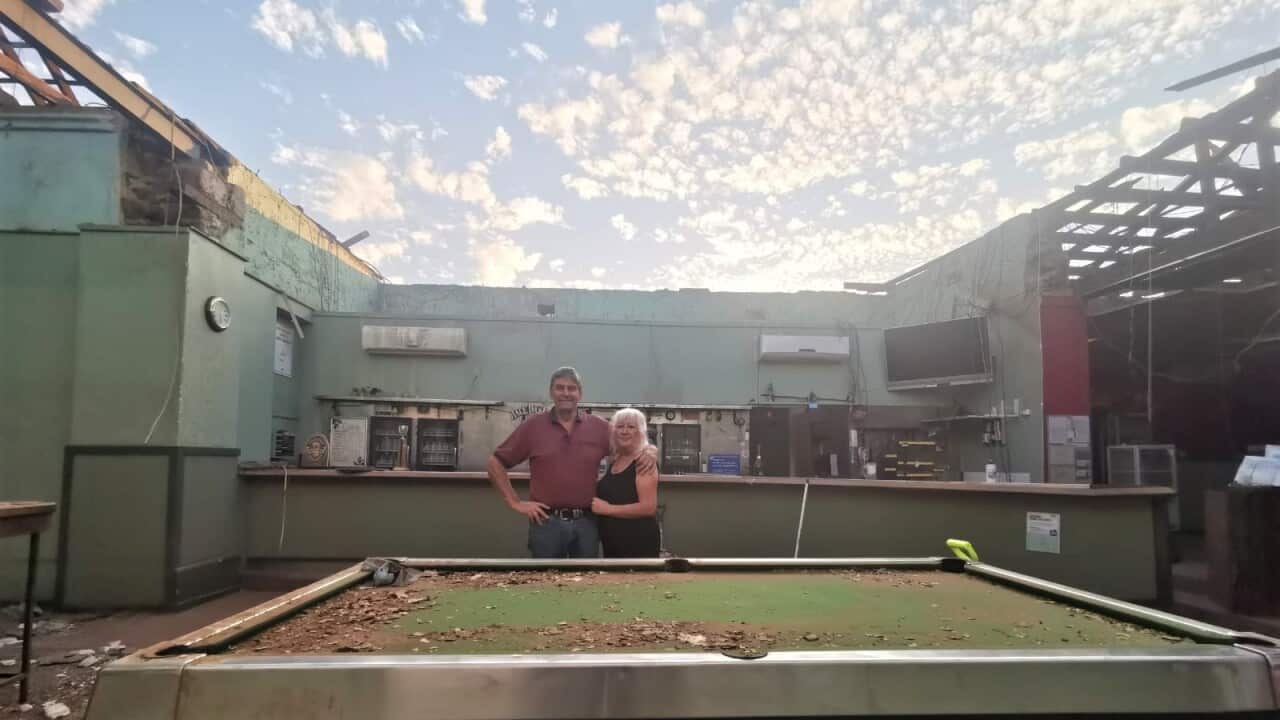 Publican Ian Trevarton is daunted by the task ahead; rebuilding his historic Railway Tavern in Northampton, almost 500 kilometres north of Perth.

The town was in the direct path of tropical cyclone Seroja in April, and what remains of his restored pub is a shattered ruin and a damage bill of more than $1 million.

“I can’t see the pub itself reopening for at least 12 months, it's going to be a long haul,” Mr Trevarton tells SBS.

Advertisement
“You look at it now and it’s very sad.”

The tavern's roof is completely gone, the interior bar has exposed beams, and walls have been shredded by the cyclone's force.

Mr Trevarton had spent the past 16 years restoring the 1876 building to its original state, replacing timbers and painting the interior in traditional colours.

Born in Cornwall in the UK, the 75-year-old migrated to Australia in 1974 and was sheltering inside the bar with his wife Kelly when the cyclone made landfall on the night of Sunday 11 April.

They consider themselves lucky to have survived.

“I could hear the verandahs going first,” Mr Trevarton says. “The noise was unbelievable, it sounded like a freight train.

“Then the whole roof section of the bar was going up and down. Then I saw the ceiling start to lift and I said to my wife, ‘I think we had better get out of here now.'”

They huddled further inside the old building as the storm rolled through. It would leave 30,500 residents without power.

"This is a part of Western Australia that doesn’t typically see these kinds of weather systems,” says Jonathan How from the Bureau of Meteorology (BOM).

"So most structures are not built to withstand winds of 170 kilometres an hour."

The last similar event was tropical cyclone Hazel which made landfall in the state in 1979, causing $20 million of damage.

“There were many surprising features of Seroja,” Mr How says.

“As it moved south from Timor, it interacted with [tropical cylone] Odette, and this is a phenomenon known as the Fujiwhara effect, which we don’t see very often.

“The two cyclones spun around each other and we did see Seroja head further south than it would have otherwise.”

For those who lived through it, haunting memories remain.

“After the storm passed, we went outside to look at the damage. It was horrendous - like a bomb had gone off really,” Mr Trevarton says.

“The verandahs were gone, the roof was gone, the tin had all gone, it was amazing. I could not believe that much destruction.”

Many farmers were also impacted. The Simpson family in Northampton lost two of their three farmhouses, as well as sheds and equipment.

Farmer Harley Simpson at his Northampton property. Source: SBS Aaron Fernandes
“Every corner you turn, you find some more damage. So it’s going to be a few months before we get on top of it,” he says.

The family of six sheltered in the bathroom with their dog as powerful winds howled past.

“The rain was pouring through the window, and that’s when my oldest son started to get upset and cried and asked if we were going to die,” Michaela Simpson says.

Michaela Simpson at a wrecked farmhouse, on the property. Source: SBS Aaron Fernandes

“It couldn’t have been worse timing,” Mr Simpson says.

“We had just started seeding canola a few weeks ago and we are finding it to hard clear up the paddocks while trying to plant.

Stockpiles of fertiliser were also damaged by torrential rain.

"It tracked very far south, it was unusually intense for that time of year, and it retained that strength for longer than was forecast as well.”

“Now these are all things we’ve been told to expect from climate change and cyclones.”

One of the smashed cabins at Wagoe Chalets. Source: SBS Aaron Fernandes
Further north at Kalbarri, Ted and Jenny McClintock can only stand and look at the shattered ruins of their Wagoe Chalets resort.

Seaside cabins built over decades now lie splintered in pieces on the property.

“I looked out and this whole thing was covered in debris, and I thought: ‘there’s 40 years out of my life gone,’" Mr McClintock says.

“It was harder putting them up than knocking them down."

The cyclone and its impacts add to the already catastrophic losses from record flooding in March across New South Wales.

“With a warming climate, we can expect to see more frequent and intense weather events," says the BOM’s Mr How.

“So that means more intense heavy rainfall events, as well as stronger tropical cyclones and more devastating and long-lasting heatwaves.”

Coastal NSW is still recovering from widespread and destructive flooding which left a damage bill of $600 million.

The BOM says it's linked to rising temperatures.

“Since national record-keeping began in 1910, Australia has warmed around 1.4 degrees,” Mr How says.

"With a warming climate, we do see more moisture in the atmosphere - up to seven per cent more per degree of warming.

"And so with more moisture in the atmosphere, there is a greater potential to see heavy rainfall events."

A butcher shop flooded in Sydney's Wilberforce in March. Source: Supplied M&A Butchery
Butcher Dean Diasinos is among business owners and residents around Windsor and Wilberforce in Sydney's west that went under, when the Hawkesbury River burst its banks, flooding farms and homes.

"It was actually quite scary, because we have been here for 30 years and it's the first time the water actually came into our house and shop," he says.

At his ruined pub in WA, Mr Trevarton is trying to stay strong, but he's concerned for those impacted by recent extreme weather and those who stand to be in the future.

“Most of Australia has already been through this. They’ve had floods and fires, and we’ve had Seroja,” he says.

“We are all in the same boat. We will survive. Australians are a hardy lot.”