An Australian Border Force officer has warned of "negligence" after one of their colleagues contracted coronavirus - saying they returned to work before the results of tests came in. 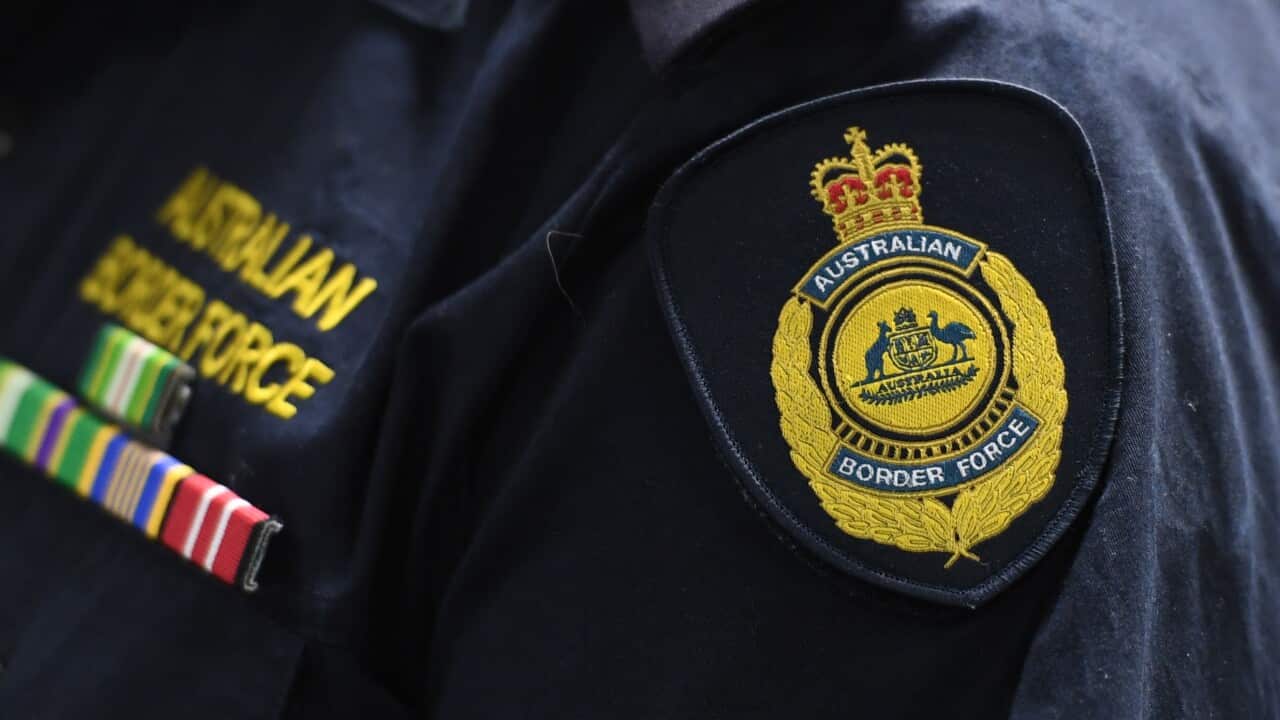 Two Australian Border Force Officers, one in New South Wales and the other in Queensland, have tested positive to coronavirus. Source: AAP

Australian Border Force officers returned to frontline duty after being tested for coronavirus, but were told to “get out” the following day when a positive test was returned.

ABF confirmed on Tuesday that two officers, one in New South Wales and the other in Queensland, had tested positive for COVID-19.

A Sydney-based Border Force officer told colleagues he believed he contracted COVID-19 while processing three American passengers who had disembarked the Ruby Princess cruise ship and were flying home to the United States.

Four other ABF officers who came into contact with the passengers returned negative tests and remain in self-isolation until 8 April, SBS News has learned.

A colleague of the man who tested positive said there is anger among workers that personnel were allowed to return to work after taking the test.

“It’s negligence, there is no other word," he told SBS News.

The ABF officer says staff were told they had contracted the virus after coming into contact with infected passengers while processing passports at Sydney and Brisbane international airports.

“People are really worried and really scared," the employee, who did not want to be named, said.

“We’ve been screaming out for proper safety gear for weeks.”

An ABF spokesperson on Tuesday said "appropriate support and information” was being provided to the officers’ immediate colleagues.

It is not known exactly when the officers tested positive to the illness.

“Both QLD and NSW Health are providing the officers with medical advice and guidance, and contact tracing has been conducted with other ABF officers and other staff who may have had close contact with the officers," the ABF spokesperson said.

More than 400 Ruby Princess passengers have contracted the virus, representing about 10 per cent of all COVID-19 cases in Australia.

The Border Force officer said frontline staff were not provided with masks and gloves until after video capturing hundreds of passengers lined up in the arrivals hall at Sydney Airport was widely shared on social media.

“Until that vision hit the TV, they weren’t doing anything,” the officer said.

SBS News has been told the work stations officers used to process incoming passengers in the arrivals halls are not routinely cleaned and were only professionally sterilised after the two employees learned they had tested positive.

The officer claims single bottles of sanitiser were being “signed out” and shared by as many as six frontline staff, while other colleagues who have come into contact with confirmed COVID-19 passengers have been told to self-isolate.

The Border Force officer said they were aware of the potential of travellers to be carrying the illness.

“You just know (the passengers) are sick, they arrive at the counter in a cold sweat, spluttering, and you just wish you had a big stick to push them away,” the colleague said.

“How anyone hasn’t got it before, I don’t know.

“They’ve probably had a mild case and not been tested, because we all know people have been coming up (to the passport counter) really sick.”

SBS News has contacted Australian Border Force and Home Affairs Minister Peter Dutton with specific questions relating to the cases, but has not received a response.

"We have sought an urgent meeting with the Department. It is essential that workplace tracing is undertaken as soon as possible to reduce risk,” she said.

"The CPSU is in ongoing discussions with our members and Home Affairs to ensure that there are appropriate workplace health and safety measures in place and that all appropriate precautions are being taken.”

The Department of Agriculture, Water and the Environment separately told SBS News on Tuesday that none of their frontline biosecurity officers have contracted the virus.

“A number of biosecurity officers have been tested since 2 February for COVID-19 where they have either had flu-like symptoms or have been in contact with a confirmed case,” a spokesperson said.

“All biosecurity officers that are suspected of being infected are placed on paid leave whilst they are awaiting test results ... [those that] are well and able to work are being fully utilised at this time to meet the demands across our operations.”

“Australian Border Forcer officers are working on the frontline of our borders, helping protect Australians from coronavirus and their dedication and sacrifice must never be underestimated," Senator Keneally told SBS News.

"My best wishes are with the affected officers and their families- it’s essential they are supported at this time by the Australian Border Force and the broader Department of Home Affairs."