SBS World News Radio: Australia's relationship with East Timor is this week being tested, with stark policy differences emerging between the Liberal and Labor parties. 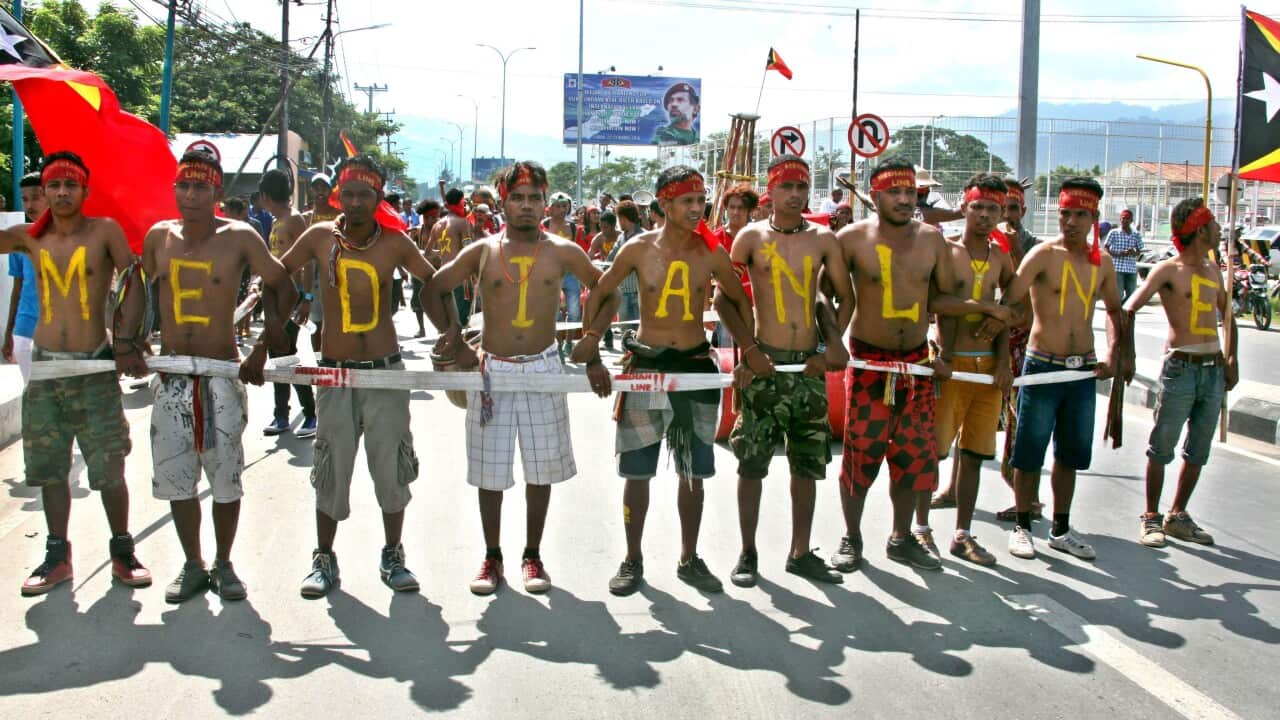 East Timor has filed a request with the United Nations to resolve a dispute over its maritime border with Australia.

It's a move that has evoked quite different policy reactions.

As part of a long-running dispute, East Timor argues it is severely disadvantaged by the lack of a permanent maritime boundary between Australia and the small island nation.

Advertisement
It says the current resource-sharing arrangements in the Timor Sea mean it's missing out on billions of dollars in revenue from offshore oil and gas fields.

The Australian federal government says the existing treaties, negotiated with the newly-independent East Timor in 2006, are fair and consistent with international law.

East Timor has now filed a request with the United Nations to help solve the dispute.

But Australia has withdrawn from the maritime boundary jurisdiction of the UN Convention on the Law of the Sea, meaning Australia's government doesn't have to abide by any decision made by the UN on the matter.

Agio Pereira is the Minister of State and East Timor's second most important Cabinet position after the Prime Minister.

Mr Pereira says they are pursuing the UN path because it can still provide high-profile and powerful recommendations.

"The recommendations will be a guide for both countries, Australia and Timor Leste, to understand under International Law, or even from a political perspective, economic perspective, the sovereignty over the Timor Sea that Timor Leste also originally has and wants the limitation and maritime boundaries to consolidate this sovereignty."

East Timor determined to get Australia's attention over sea boundaries

The procedure, under the UN Convention on the Law of the Sea, calls for a five-person panel of conciliators to help the two sides try to reach an amicable settlement.

The Australian government says there's no need for such a procedure.

Resources Minister Josh Frydenberg told the ABC Australia isn't going to enter into further discussions because he believes the government has already got the balance right.

"Japan and Korea did a similar agreement. And we think any move to go towards this compulsory arbitration or coordination actually contravenes the previous agreements that both countries voluntarily entered into."

But Labor's Foreign Affairs spokeswoman, Tanya Plibersek, says if the UN arbitration process ends with Australia being told to change its policy, a Labor government, if elected, would do so.

Ms Plibersek has told the ABC it would be the correct thing to do if Australia is to be consistent in its foreign policy positions.

"And at the same time as we're saying that China and other nations that have claims in the South China Sea should submit themselves to arbitration and should abide by the outcome of that arbitration, particularly under the UN Convention on the Law of the Sea, it's a bit rich if we're not prepared to do it ourselves."

Mr Pereira says the establishment of a maritime border is essential for East Timor and that it's important discussions continue.

"In a substantive, well-structured negotiation, Australia and Timor Leste can talk about all these issues. But refusing negotiations with Timor on the maritime boundary, the limitation and throwing out all these arguments in the public arena -- it doesn't help."

It's not the first time an International body has been involved in this long-running dispute between Australia and East Timor.

In 2014, the International Court of Justice told Australia it had violated East Timor's sovereignty by spying on government officials in the capital Dili during maritime negotiations.

Australia's domestic spy agency, ASIO, had also seized documents from the office of an Australian-based lawyer acting for East Timor in the negotiations.