Italy's Senate has voted to allow prosecutors to put ex-interior minister Matteo Salvini on trial on charges of illegally detaining migrants at sea. 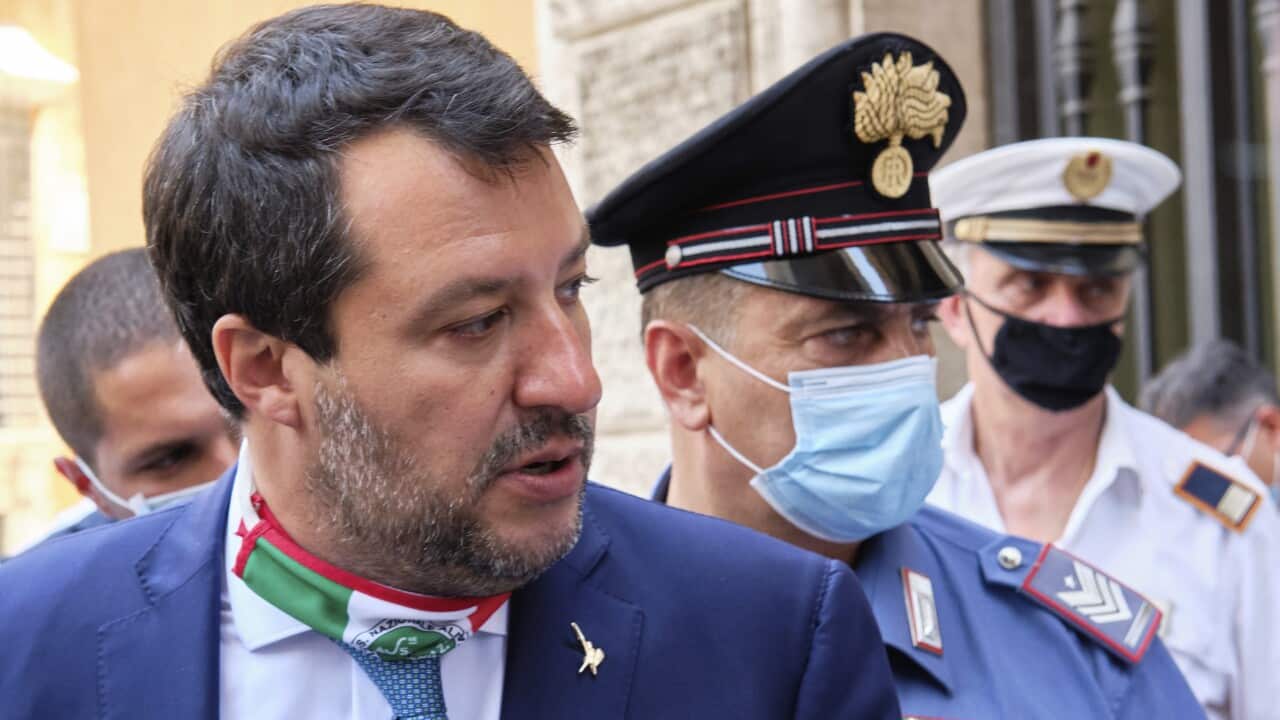 Italy's Senate voted on Thursday to strip far-right chief Matteo Salvini of his parliamentary immunity, paving the way for him to face trial, for a second time, over allegedly illegally detaining migrants at sea.

Mr Salvini, a senator, now looks set for a potentially career-derailing case on charges that could see him serve up to 15 years in jail if convicted.

The Senate voted 149 to 141 to strip Mr Salvini of his immunity, with one abstention.

Advertisement
"I am proud to have defended Italy. I would do it again and I will do it again, also because just this July the arrivals are six times those seen in the same period a year ago, with the League party in government," a defiant Mr Salvini told the Senate after the vote.

The head of the anti-immigrant League party is already set to stand trial in a separate but similar case.

Prosecutors in the Sicilian city of Palermo accuse Mr Salvini of abusing his powers as then-interior minister in August 2019 to illegally prevent more than 80 migrants, rescued in the Mediterranean, from disembarking from the Open Arms charity ship for 19 days.

Ministers cannot be tried for actions taken while in office unless their parliamentary immunity is revoked by the Senate.

Mr Salvini has insisted the decision, which has made to stop the migrants from getting off the ship until a deal was brokered with EU countries to take them in, was reached collectively within the government.

That is the same defence Mr Salvini is using for the other trial, in which he is accused of blocking migrants from disembarking from the Italian "Gregoretti" coastguard boat last July.

In February, the Senate voted to strip him of his parliamentary immunity in that case. The preliminary hearing has been postponed three times due to the coronavirus pandemic, and is now scheduled to take place in Sicily on 3 October.

In a statement, Open Arms said it hopes the Senate's decision gives "a definitive and unequivocal signal that the democratic institutions of every liberal country exist to protect the principles on which they are based."

"These are the political choices that make the difference between a country whose foundation is respect for human rights and life and a country that chooses to give up the best part of itself," the group wrote.

Political analyst Franco Pavoncello said the Senate's go-ahead on the Open Arms trial would "certainly have an impact on Salvini", whose popularity has dropped since the coronavirus pandemic swept through Italy.

Mr Salvini, 47, says Italy's more than two-month lockdown hit him and his party hard, as he had to put an end to his frequent rallies up and down the country and his famous beachside selfie sessions.

A Demopolis poll this week found that the League has dropped more than 11 per cent in a year, from holding 37 per cent of voting intentions to 25.4 per cent on Friday.

"At the moment Salvini generates little media interest. The decision to strip him of his immunity would reopen the case and could whip up media attention," Mr Pavoncello told AFP ahead of the Senate vote.

"Those who vote to send him to trial in a bid to create political problems for him could end up giving him the limelight instead."

But while Mr Salvini may make temporary gains, "a trial could be difficult for him in the long term, for the charges are serious," Mr Pavoncello added.

Mr Salvini is currently in opposition but is determined to become prime minister.

Although the anti-migrant League may be slipping down the polls, it is still the most popular party in Italy and its leader expects to do well at the next elections.