Images have emerged showing devastation on Tongan islands after a volcanic eruption plunged the Pacific Island nation into a communication blackout. 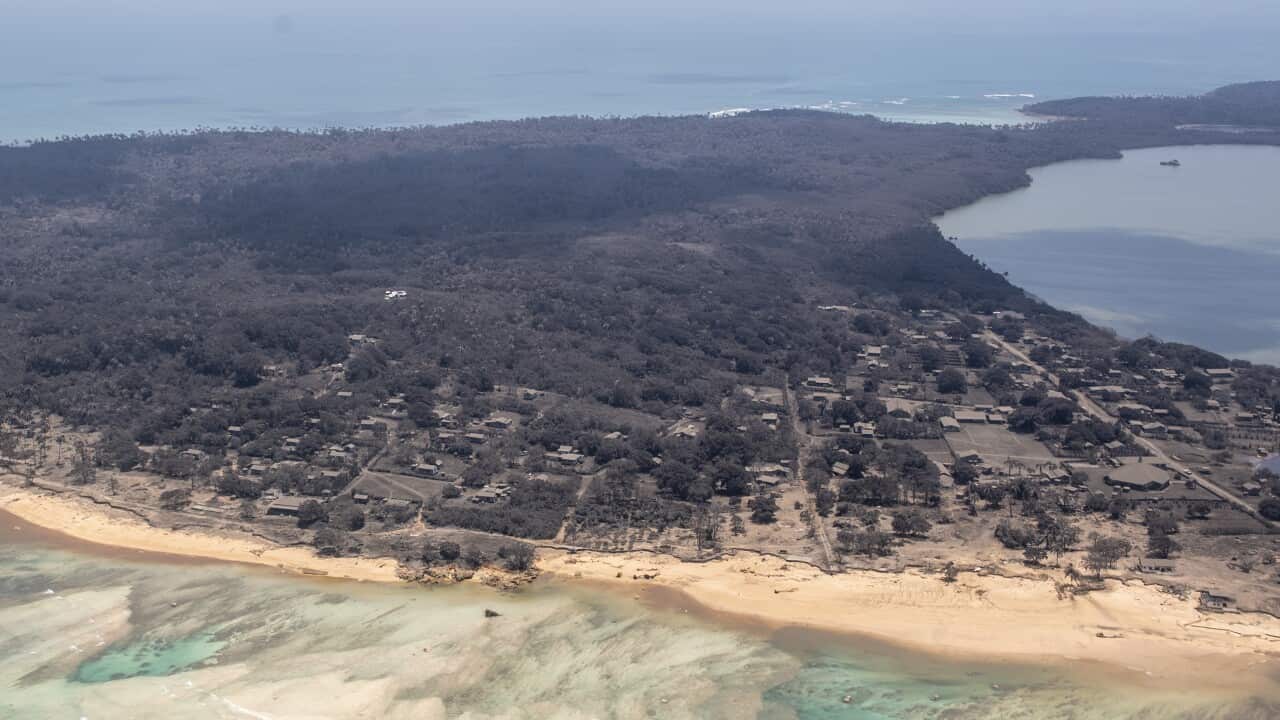 Collapsed buildings, an ash-covered airport and catastrophic coastline damage. The first photos out of Tonga have emerged and they paint a bleak picture.

Aerial images captured in the aftermath of what's thought to be the largest volcanic eruption in 30 years show the devastating blow that has been dealt to the Pacific Island nation.

Tonga has seen trees uprooted and temporary structures set up after multiple buildings were destroyed.

Australia and New Zealand had sent surveillance flights to assess damage in Tonga after the eruption of the Hunga Tonga Hunga Ha'apai volcano on Saturday cut off the internet to the island, causing a communication blackout.

A major underwater telecommunications cable was also damaged in the tsunami and is expected to take at least two weeks to repair.

The eruption had sparked tsunami warnings in parts of NSW and Queensland and caused massive surf on multiple South Pacific islands.

The family of Ms Glover confirmed she was killed by the tsunami that followed the volcanic eruption.

The Speaker of Tonga's Legislative Assembly, Lord Fatafehi Fakafānua, said 103 homes are severely damaged on the main island Tongatapu and 47 in neighbouring 'Eua, while some of the Ha'apai islands have suffered complete devastation with no households left.

"[Waves were] five to 10 metres high, which is a lot higher than most homes. So we can only imagine the sheer devastation and the fear of people trying to run away for their lives," he told SBS News.

"The damage has been devastating in the northern islands."

He said power has been reestablished on the main island and in the capital, Nuku'alofa.

"The challenge now is the cleanup of ash. There's a blanket of about 10 centimetres all over the island group."

In this handout photo provided by the New Zealand Defense Force, an aerial view from a P-3K2 Orion surveillance flight of homes covered in ash on January 17 Source: Getty Images AsiaPac

The Senator said that food and water and clean-up equipment will be sent on a C-130 plane once the airport in Tonga is able to reopen.

"There is still a significant amount of ash at the airport. It was hoped the airport might open today, but that's more likely now to be tomorrow," Senator Seselja told the Nine Network.

New Zealand’s Minister of Foreign Affairs Nanaia Mahuta said images out of Tonga showed ashfall on the Nuku’alofa airport runway “that must be cleared before a C-130 Hercules flight with humanitarian assistance can land.”

“Communication issues caused by the eruption have made this disaster response particularly challenging.

“The delays mean we have taken the decision for both HMNZS Wellington and HMNZS Aotearoa to sail so they can respond quickly if called upon by the Tongan Government.”

A crew member from an Orion aircraft look out the window as it flies over an area of Tonga that has heavy ash fall. Source: New Zealand Defense Force

The deputy head of mission at Tonga's high commission in Australia, Curtis Tu'ihalangingie, said there was still uncertainty about the level of damage to Tonga, but basic supplies were needed.

Mr Tu'ihalangingie said it would still be weeks before communication was fully restored in the country.

"Communication is on locally, so people can call one another in Tonga, but can't call internationally, we still have limited access to Tonga," he told ABC Radio.

"We still don't have a direct communication with our government."