When they first met he was 15 years old and she was a married 40-year-old drama teacher coaching him in a school play. In her new role as France's First Lady, Brigitte Macron will continue to coach her husband on a bigger stage. 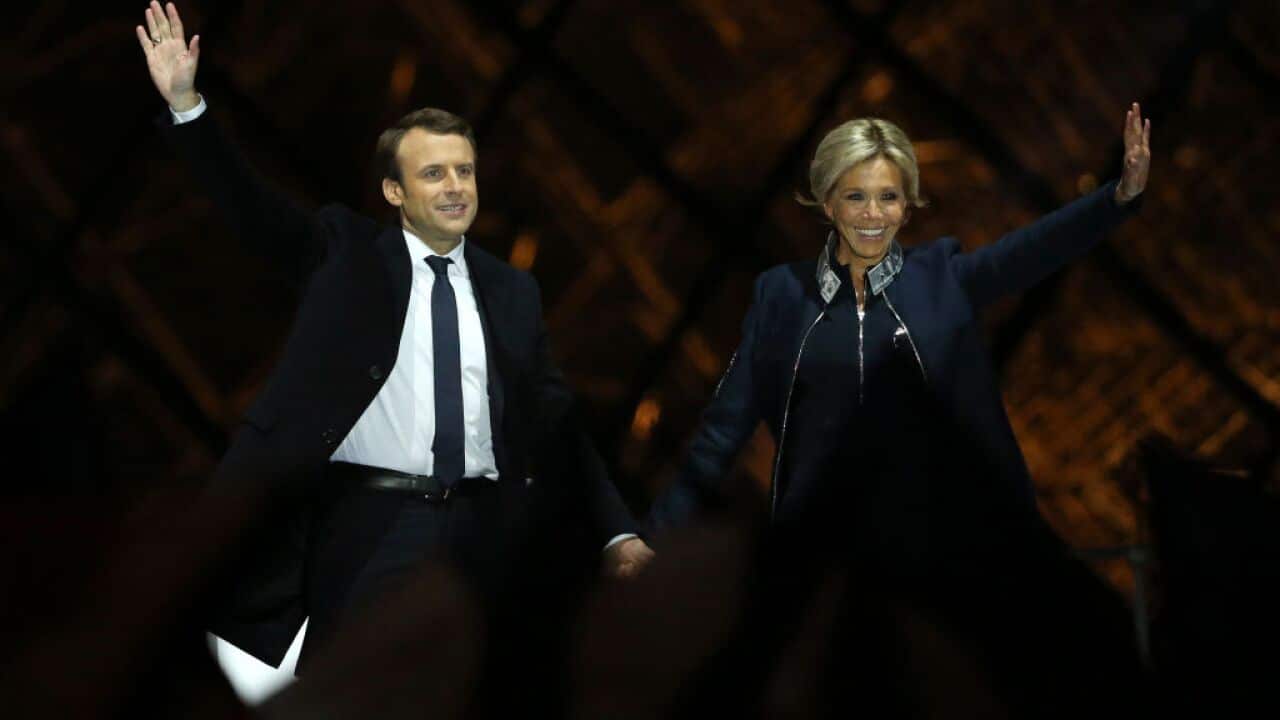 Newly-elected French President Emmanuel Macron's wife, now 64, has been constantly by his side during his campaign, managing his agenda, editing his speeches and advising him on his stage presence.

For his victory speech after winning the first round of the election two weeks ago, Macron brought his wife onto the podium and thanked her, to long applause.

"Brigitte, always present, and even more now, without whom I would not be me," an emotional Macron said as hundreds of his supporters shouted her name.

At the economy ministry, she was a discreet presence during meetings with officials in the modernist Bercy building by the Seine in eastern Paris.

"She spends a lot of time here because her view matters to me, because she brings a different atmosphere, that is important. My life is here, you cannot work well if you are not happy," Macron said in his last staff meeting after he resigned from the Hollande government in August 2016.

He would not declare his presidential bid until three months later, on Nov. 16, 2016, but by then he had already started making the relationship with Trogneux - nearly 25 years his senior - an integral part of his public persona.

Brigitte Macron, wife of Emmanuel Macron, casts her ballot in the second round of the French presidential election while her husband looks on. Source: AAP

In the months leading up to his official candidacy, the French public discovered Trogneux in a series of cover stories in the popular society magazine Paris Match, including, in August 2016, one of the couple on the beach, the petite blonde looking svelte and tanned in a one-piece bathing suit.

"Lovers' holiday before the offensive," read the headline.

In a November 2016 TV documentary on France 3, just days after Macron declared his bid, the couple shared video footage of the youthful Macron in the school play at which they met, and footage of their 2007 wedding ceremony.

"Thanks for accepting us, a not quite normal couple," Macron is heard saying in a video of the ceremony, attended by Trogneux' then adult children. He was nearly 30, she 54.

Macron supporters say these jokes are misogynist, saying that nobody would bat an eyelid if the age difference - the same as between U.S. President Donald Trump and his wife Melania - had been the other way around.

Trogneux, takes the mockery in her stride and has joked that if he wanted to run for president, he better do it soon, while she still looked presentable.

"He needs to go for it in 2017 because by 2022, his problem will be my face," she was quoted as telling a friend in Nico­las Pris­sette's book "Emma­nuel Macron en marche vers l’Élysée"

Born Brigitte Trogneux April 13, 1953, the youngest of six children in a family of wealthy chocolate makers in the northern town of Amiens, she married a banker with whom she had three children.

In 1993, in the Providence Jesuit college where she taught French and drama, the young Macron acted in a play under her supervision. The next year, the two rewrote a play together, adapting it to include more roles.

"Little by little, I came totally under the spell of the intelligence of this young boy," Trogneux told France 3 TV.

As rumours started to fly about the relationship, Macron left Amiens to complete his last year of high school at the prestigious Lycee Henri IV in Paris, a traditional breeding ground for the French elite.

"You cannot get rid of me. I will come back and I will marry you," Macron told Trogneux according to his biographers.

Asked about what role Trogneux would play at the Elysee if he were elected, Macron has said that he will propose that within the first weeks of his presidency a formal, albeit unremunerated, role is established for the French First Lady and that she will have her say in how that role is defined.

"She will have an existence, she will have a voice there, a view on things. She will be at my side, as she has always been, but she will also have a public role," he said.