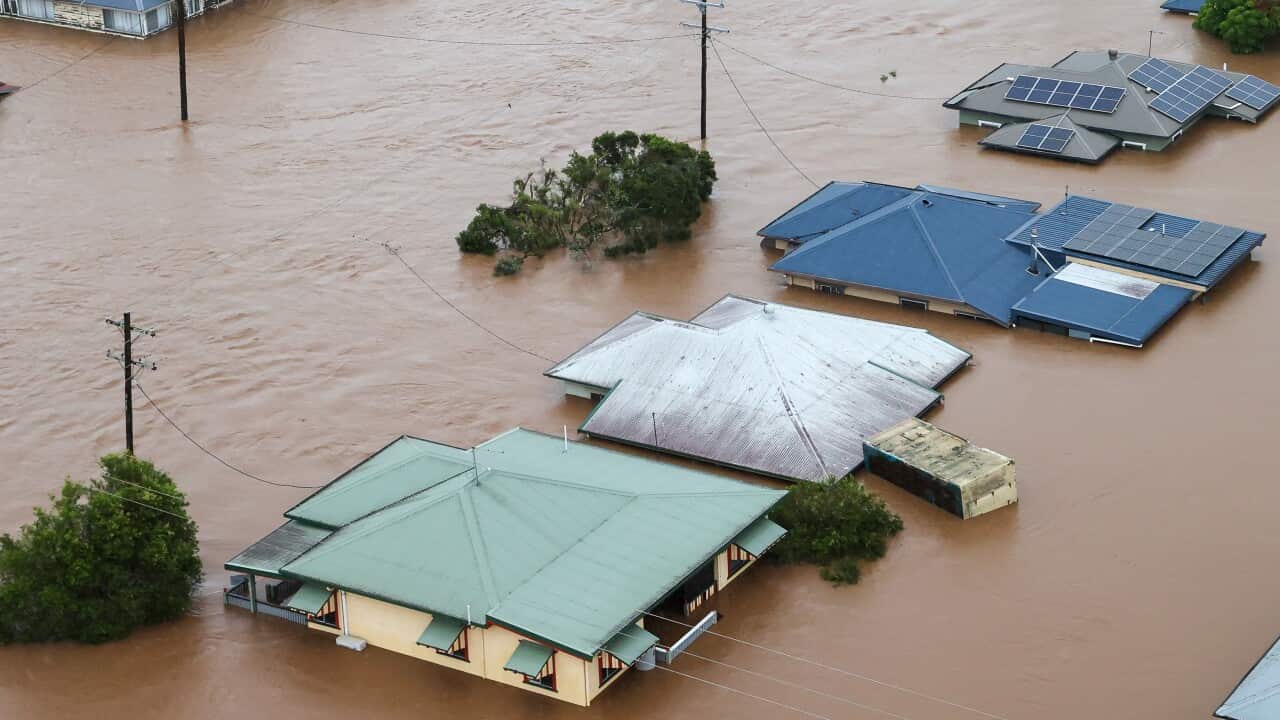 Tens of thousands of people have been forced to evacuate, and 21 people have died, during the severe floods striking parts of Queensland and NSW.

Australia is currently at the tail end of a La Niña weather pattern, which typically brings wetter-than-normal conditions to the east coast.

Advertisement
A member of the Australian Defence Force helps with clean-up efforts following floods in Lismore, NSW. Source: AAP / Jason O'Brien
Professor Will Steffen, from the ANU Climate Change Institute, said the combination of La Niña and global warming was a potent mix for extreme weather.

“Climate change simply stacks the odds that you are going to see these sorts of things increasingly,” he told SBS News.

“We still have the weather patterns that we are used to, but they’re on steroids. And that’s what climate change is doing – it’s supercharging the atmosphere and the entire climate system.”
As global temperatures rise, more moisture will be trapped in the atmosphere, and La Niña weather events will become more intense, Professor Steffen said.

“We’re in a La Niña now, and that’s occurring in an atmosphere that’s warmer by a bit over 1 degree Celsius on pre-industrial times.

“What that means is this La Niña has a lot more water vapour in the atmosphere, and that simply stacks the odds that when it does rain, it will be more severe – and our infrastructure is not planned for that.”
READ MORE
Scott Morrison flags extra financial assistance as NSW flood risk remains despite easing rain
The Bureau of Meteorology earlier in March said the current La Niña cycle was “past its peak”, and was likely to dissipate in autumn.

Climatologist Neil Plummer, the former head of climate services at the Bureau of Meteorology, said the risk of future extreme flooding events was increasing.

“A really big concern now is, what happens when those climate projections have us going over 2 degrees Celsius,” said Mr Plummer, who is now a consultant at the Monash Climate Change Communication Hub.

As La Niña batters Australia, it is sucking moisture away from other parts of the planet.

A severe drought in Brazil, and devastating crop shortages in Ethiopia, have also been partly driven by the La Niña system.

READ MORE
'It's insulting': Community rages over ADF appearing to pose for photos during flood clean-up
Nina Ridder, from the UNSW Climate Change Research Centre, said it was unclear whether La Niña cycles would become more common – but they would be more intense.

“La Niña occurs roughly every three-to-seven years. In general the east of Australia is a lot wetter than it would be, there’s more wild weather,” said Dr Ridder.

“What climate change does is heat up at atmosphere. Which means that we will see a lot more of these extreme events that we’ve seen recently.”
Prime Minister Scott Morrison speaks during a press conference in flood-ravaged Lismore. Source: AAP / Dave Hunt
Prime Minister Scott Morrison on Wednesday visited the flood-ravaged town of Lismore, where he was asked whether climate change was a factor in the disaster.

"I think is just an obvious fact in Australia is getting hard to live in because of these disasters."

The Climate Council on Thursday released a new report examining the relationship between flooding events and climate change.

"Climate change is firmly embedded in the 2022 flooding emergency that swept through southeast Queensland and NSW with some regions experiencing rainfall that was simply off the charts," the report said.
SHARE
4 min read
Published 10 March 2022 at 12:58pm, updated 11 March 2022 at 7:57am
By Steven Trask
Source: SBS News
Tags
Australia