The deal between Israel and the United Arab Emirates aims to fully normalise relations after decades of distrust and violence between the Jewish state, the Palestine Territories and their Arab allies. 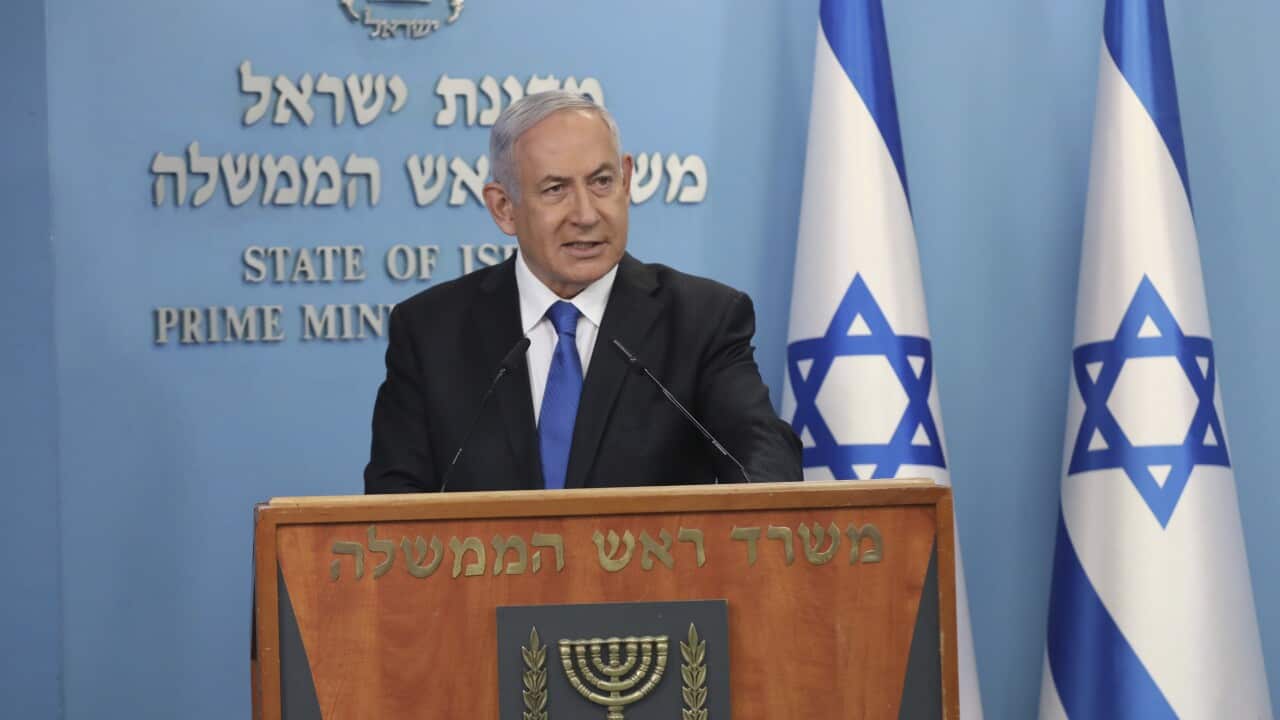 Israel talked of "history" and Palestinians of being "blindsided" after the surprise announcement of a deal to normalise relations between the Jewish state and the United Arab Emirates.

In a nationwide televised address, Israeli Prime Minister Benjamin Netanyahu said the deal would lead to "full and formal peace" with the Gulf Arab state and voiced hope that other countries in the region would follow the UAE's example.

Mr Netanyahu said it also entailed acceding to a request from US President Donald Trump to "temporarily wait" on implementing the Israeli leader's pledge to annex parts of the West Bank.

Advertisement
The annexation plan is supported by the Janurary 2020 Israeli-Palestinian peace plan of US President Donald Trump but widely rejected in the region. Source: AAP

President of the Palestine Territories Mahmoud Abbas seemed to be taken by surprise by the Israel-UAE deal and was holding meetings with key aides. He has refused all political dealings with the Trump administration for more than two years, accusing it of taking a consistently pro-Israel stance.

Asked if the Palestinian Authority or Palestine Liberation Organization were aware the deal was coming, Hanan Ashrawi, a veteran Palestinian negotiator, told Reuters: “No. The PLO, the PA, the Palestinian leadership did not know this was coming. We were blindsided. Their secret dealings are now completely out in the open. It is a complete sell-out.”

Much use was made of the word "normalisation" - a term that has very different connotations on either side.

For Israel and the White House, it signified a welcome rapprochement with a key Gulf player in a region from which Israel has long been isolated, aside from two peace treaties with its immediate neighbours Egypt and Jordan.

But for many Palestinians, the word has overwhelmingly negative connotations.

Ms Ashrawi decried what she called the UAE's "secret dealings/normalisation", and in Gaza, Fawzi Barhoum, a spokesman for the armed Islamist group Hamas, told Reuters: “Normalisation is a stab in the back of the Palestinian cause, and it serves only the Israeli occupation.”

The deal provides a diplomatic achievement for Mr Netanyahu after weeks of domestic criticism over his handling of the coronavirus pandemic and the economy, but also angered right-wing Israeli settlers who want to annex the West Bank.

READ MORE
What are Israel's annexation plans for the West Bank and what could the consequences be?

Mr Netanyahu said that while he had promised to apply Israeli sovereignty to areas, including Jewish settlements, in the territory, which Palestinians seek for a future state, he had made clear he first needed a green light from Washington.

"He deceived us. He has deceived half a million residents of the area and hundreds of thousands of voters," said David Elhayani, head of the Yesha Council of settlers.