Anti-vaxxers are using “predatory” tactics to seize on community distrust in health services and the result is children are dying from an entirely preventable disease. 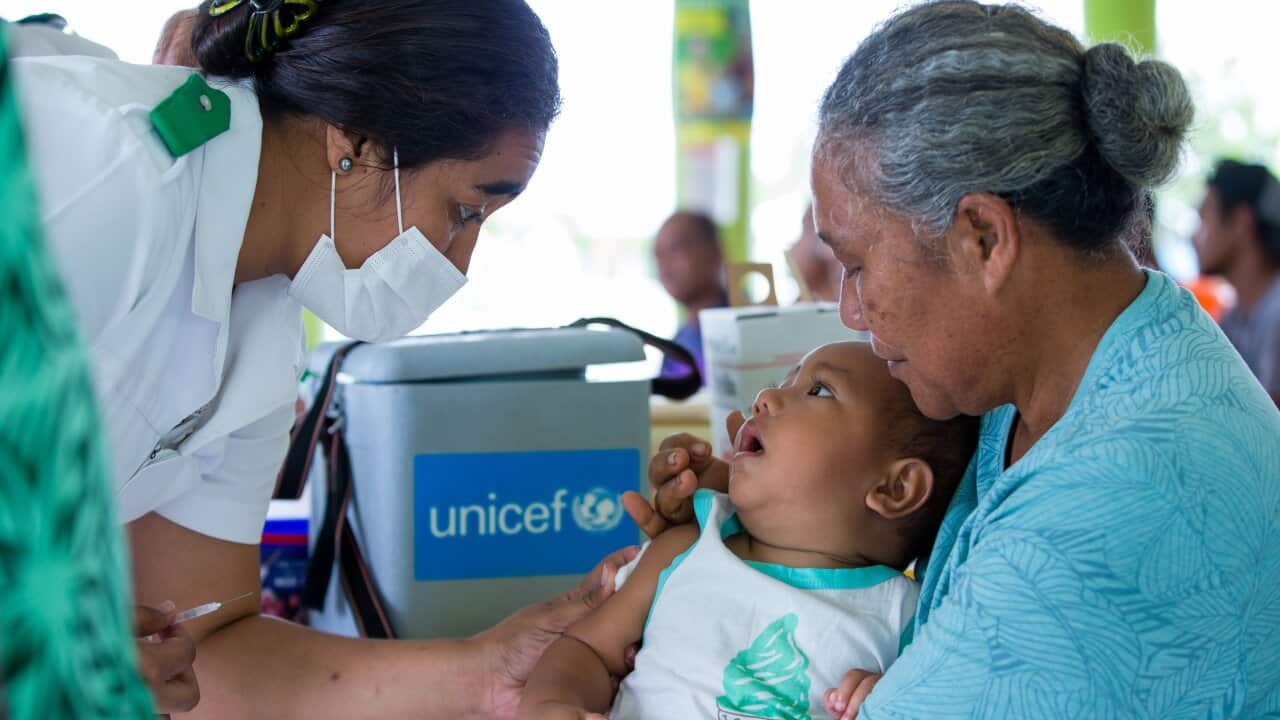 The
deadly measles outbreak in Samoa
is a sign of the expansion of an increasingly predatory anti-vaccination movement, medical experts have warned.

While the measles outbreak is believed to have originated in New Zealand and swept across the Pacific, Samoa has been the hardest hit due to its low vaccination rates.

That’s sparked heated debate about the role of anti-vaxxers and authorities’ failure to counter the misinformation following the deaths of two babies from wrongly-administered doses.

More than 50 people have died from the preventable disease, mostly young children - who health authorities say were unvaccinated.

The
government has taken emergency measures
to limit the spread and vaccinate tens of thousands, but authorities expect the number of deaths to rise.

But the task is enormous, with estimates
that just 30-40 per cent of Samoa’s 200,000 residents were vaccinated
.

Vaccinations were suspended after the two infant deaths, but it’s the way the anti-vaccine movement seized on the tragedy that has alarmed medical experts.

Dr Nikki Turner, director of the Immunisation Advisory Centre at the University of Auckland, said the anti-vaccine movement ramped up their activity, particularly on social media.

“Anti-vaxxers arrive in big numbers when there’s concerns and lack of trust and the core of the problem that is happening in Samoa is lack of trust, lack of trust in vaccines in health service delivery,” Dr Nikki Turner told SBS News.

In social media posts, Mr Kennedy Jr, who believes vaccines cause autism, questioned how many more babies in Samoa had received the vaccine on the same day as the two babies who later died.

He did not update the post when two nurses were charged with manslaughter over the improper administration of the vaccines.

She still went ahead with her visit to Samoa where she met Mr Kennedy Jr.

Children with parents wait in line to get vaccinated outside a health clinic in Apia, Samoa. Source: TVNZ/AP

Ms Winterstein posted a photo on Instagram of the two of them together in Samoa with the caption: “I am deeply honoured to have been in the presence of a man I believe is, can and will change the course of history.”

Even as the death toll rises anti-vaxxers appear undeterred, slamming the government’s compulsory vaccination program and rallying supporters to send vitamin A to combat the disease.

Ms Winterstein compared the mass vaccination campaign to Nazi Germany in social media posts which she later amended to remove the reference and continues to recommend vitamin A as treatment.

Dr Turner said vitamin A can be used as part of treatment but is no cure.

While Samoa focuses on trying to contain the deadly outbreak, Dr Hotez said the role of anti-vaccine advocates needs to be properly examined.

“Once that settles there’s going to be a need either for a commission or a thorough investigation to really uncover how the anti-vaccine lobby might have helped to generate this epidemic,” Professor Hotez said.

In this November 2019, image from video, a child gets vaccinated at a health clinic in Apia, Samoa. Source: TVNZ

Professor Hotez, who has written a book Vaccines Did Not Cause Rachel’s Autism, said the anti-vaccine movement had also zeroed in on the Somali immigrant population in the US and the orthodox Jewish community in Brooklyn.

He said not enough has been done to counter what some consider a fringe element, largely confined to the US and Europe, despite it amassing a huge social media presence which has enabled it to expand far beyond.

“The usual public health leaders were either unable or unwilling to respond to it so it left a vacuum there and no one was really standing up to this anti-vaccine lobby which is now largely running unopposed and I thought here I am a vaccine scientist and a paediatrician and the parent of an adult daughter with autism and I thought if I don’t do it who will?" he said.

“This has been put me front and centre of combating an anti-vaccine movement and I’ve been able to witness first hand the aggression and the extent of this movement and it’s very frightening.”

“What we do know is people remember the myth, not the detraction of the myth so every time we mention a myth you tend to find that’s what gets embedded in the community.”

She said it shouldn’t take a tragedy like what is occurring in Samoa to change people’s attitudes.

“It’s always tricky with vaccines because you’re selling the absence of disease so you don’t want the disease to return for people to be convinced they need the vaccine," she said.

“So this will make a difference to the Samoan community, they are out there getting lots of people vaccinated right now, but the importance for Samoa is the community genuinely restoring their trust and faith that can be delivered effective safe vaccines and when they go to hospital they get good treatment.”