The need for Indigenous Australians to have an enhanced role in the country's decision-making is the theme underpinning NAIDOC Week 2019. 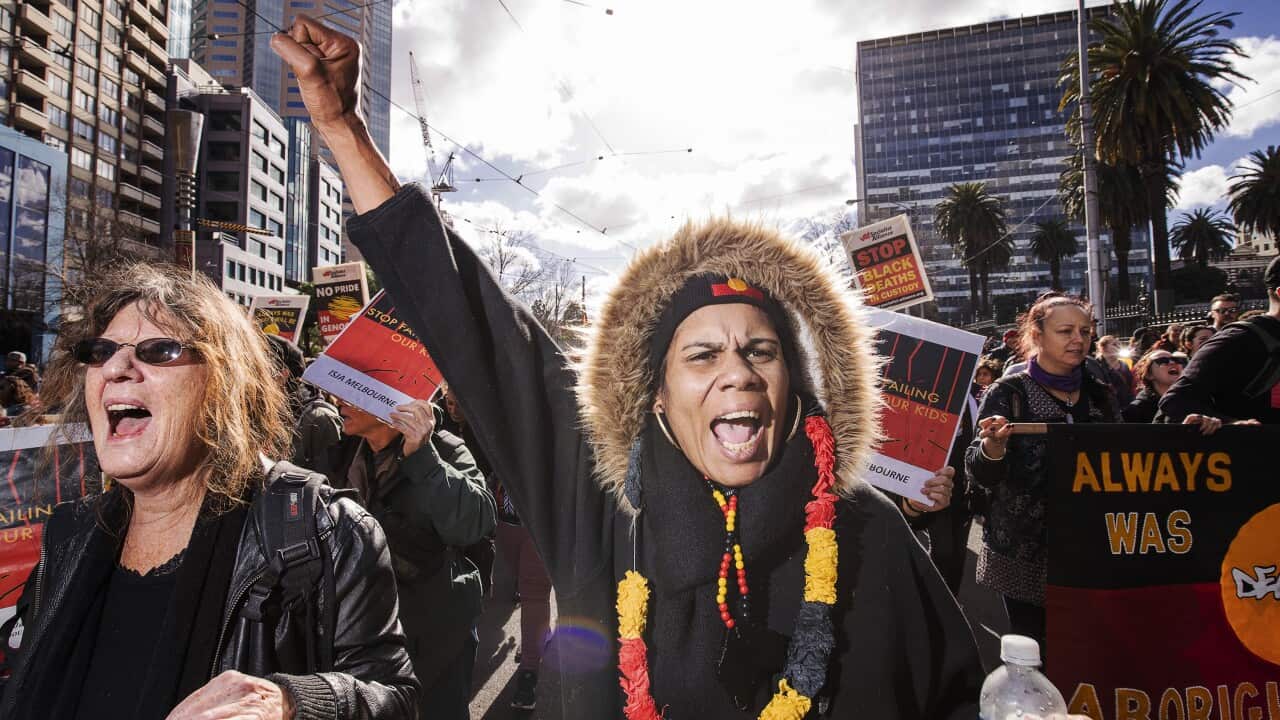 People supporting NAIDOC Week participate in a march through Melbourne in 2018. Source: AAP

From 7-14 July, a series of events across Australia will mark NAIDOC Week, delivered this year under the theme 'Voice. Treaty. Truth. Let's work together for a shared future'.

How did NAIDOC Week start?

Organised by the National Aborigines and Islanders Day Observance Committee, NAIDOC has its roots in activism that took place in the 1920s and 30s.

Advertisement
On Australia Day 1938, protesters marched through Sydney in what was called a Day of Mourning.

Its success led to the day being marked each year on the Sunday before Australia Day, in what became known as National Aborigines Day. That was eventually shifted to July so the day of protest could also be one of celebrating Aboriginal culture.

In 1975, the annual commemoration became a week-long event marked from the first to the second Sunday in July.

John Paul Janke, co-chair of the National NAIDOC Committee, says the enduring quest for a treaty and for a process known as truth-telling is reflected in this year's theme.

"The NAIDOC Committee felt that those issues have been sort of bubbling away at the surface for generations," he told SBS News.

People supporting NAIDOC Week participate in a march through Melbourne in 2018. Source: AAP

"We believe that the best way to do that is to undergo a truth-telling exercise ... to tell the true history of this country, and it's something that the NAIDOC Committee felt it's time to undertake."

A new generation of support

Mr Janke says what started as a protest movement is now a week of celebration. And support for it is growing.

"Today, it is used by Indigenous communities to still celebrate their survival but also to celebrate their rich history, their diverse cultures and also to share their knowledge.

"In the Indigenous community it's growing more than ever, each year the celebrations get bigger and bigger.

A NAIDOC week march in Melbourne in 2018. Source: AAP

"In the non-Indigenous community, the celebrations are increasing and, in fact, a lot more non-Indigenous people and communities and organisations are celebrating NAIDOC using it as an opportunity, I think, to engage with the Aboriginal and Torres Strait Islander community."

Wiradjuri Wailwan woman and lawyer Teela Reid (pictured below, left) encourages young Indigenous Australians to celebrate during NAIDOC week and recognise the importance of their own individual voices.

"But also to step up to the plate now and understand that although they might be young, their voice is equally important in this conversation and to not be afraid but to be brave enough to stand up for themselves, for their nation and to ensure that no matter where they are their voices are heard in this discussion."

One of the key events is the National NAIDOC Awards Ceremony, which this year is being held in Canberra. on Saturday 6 July.

It recognises outstanding contributions made by Indigenous Australians to improve the lives of Indigenous people, to promote Indigenous issues in the wider community and to recognise the excellence of individuals in their field of expertise.

The Chief Executive of the Healing Foundation, Richard Weston, says the recipients are often people who have dedicated their lives to helping others.

"Many of those people have dedicated their lives to their families and communities and that recognition is really important. It's a uniting event for Aboriginal and Torres Strait Islanders across the country" she said.

"That opportunity to connect up and celebrate and I'm sure the rest of Australia would get something out of it too if they had more exposure to it."

The Healing Foundation works to support Indigenous Australians to overcome trauma by partnering with communities to develop healing solutions. It's been running for almost 10 years and has assisted 45,000 people, with 7,000 of those being members of the Stolen Generations.

'The importance of truth-telling'

Mr Weston says the process known as truth-telling is a key aspiration for Indigenous Australia.

He says the process could work in both formal and informal ways and, apart from setting the record straight on Australia's treatment of its Indigenous people, he sees it as an opportunity to improve their current circumstances.

Members of the Dancestry Aboriginal and Torres Strait Islander dance troupe perform at the opening of NAIDOC Week in Sydney in 2014. Source: AAP

"We have to deal with what's going on today. And I think that's the other element of this, that truth-telling can help us better understand the challenges and disadvantage that Aboriginal and Torres Strait Islander people are facing, where those root causes are, and get better implementations of solutions."

This year,
SBS has partnered with the National NAIDOC Committee
to prepare classroom resources for primary and secondary school teachers so they can engage students and share Indigenous perspectives in their communities.

Video at top of article: NITV explainer - Uluru Statement from the Heart

For more stories on NAIDOC celebrations around the country go to
sbs.com.au/nitv/naidoc