At least 14 people dead after eruption of Indonesia's Semeru volcano

Semeru, more than 3,600 metres high, is one of Indonesia's nearly 130 active volcanoes. 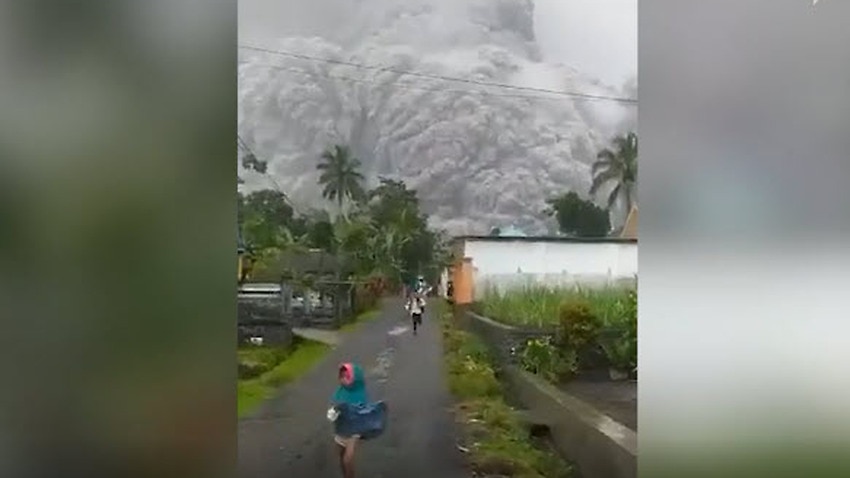 The eruption of the biggest mountain on the island of Java caught locals by surprise on Saturday, sending thousands fleeing. Source: Twitter

At least 14 people have died and dozens injured following the eruption of Indonesia's Semeru volcano.

Semeru, the tallest mountain on Java island, threw up towers of ash and hot clouds on Saturday that blanketed nearby villages in East Java province and sent people fleeing in panic.

The eruption destroyed buildings and severed a strategic bridge connecting two areas in the nearby district of Lumajang with the city of Malang and wrecked buildings, authorities said.

An official from the country's disaster mitigation agency, BNPB, said in a news conference on Sunday that 14 people had been killed, nine of whom have been identified, and 56 people suffered injuries, most of them burns.

Around 1,300 people have been evacuated, while nine people remain unaccounted for, BNPB said.

Heavy rain is expected for the next three days, which could complicate evacuation efforts, a meteorological agency official said late on Sunday.

BNPB will rebuild the wrecked homes, and heavy equipment, including excavators and bulldozers, is being deployed, its chief said.

The agency also said that 10 people trapped in sand mines by the eruption had been evacuated to safety.

Read More
Sunda Strait tsunami: Why does Indonesia have so many natural disasters?

Semeru, more than 3,600 metres high, is one of Indonesia's nearly 130 active volcanoes.

It erupted in January, causing no casualties.

Indonesia straddles the "Pacific Ring of Fire", a highly seismically active zone, where different plates on the earth’s crust meet and create a large number of earthquakes and volcanoes.

Halmahera is about 2,000 km northeast of Semeru.