A deadly cyclone blasted ashore in western India late on Monday with fierce winds and drenching rains that turned streets into rivers, disrupting the country's response to its devastating COVID-19 outbreak.

More than 200,000 people were evacuated from their homes in the Indian state of Gujarat and authorities shut ports and major airports as the most powerful cyclone in more than two decades made landfall in the state late on Monday.

Rain intensified and several incidents of power outages were reported in the state.

Electricity pylons and trees were uprooted and buildings were damaged in coastal areas of Gujarat, state authorities said.

With the worst of the storm expected to last for several hours after it slammed into the state's coast, it has piled more pressure on Indian authorities already struggling with a huge caseload of COVID-19 infections.

"This cyclone is a terrible double blow for millions of people in India whose families have been struck down by record COVID infections and deaths," Udaya Regmi from the International Federal of Red Cross said.

The cyclone has already killed at least 16 people and left a trail of destruction as it brushed past the coastal states of Kerala, Karnataka, Goa and Maharashtra, the authorities said.

"The landfall process has started, and it is expected to last for four hours," Gujarat Chief Minister Vijay Rupani said. "The intensity of the Cyclone Tauktae will go down once it is over,” Minister Rupani said in a social media address on late Monday evening.

State revenue secretary Pankaj Kumar told Reuters it would be the most severe cyclone to hit Gujarat in at least 20 years.

A 1998 cyclone killed at least 4,000 people and caused hundreds of millions of dollars in damage in Gujarat.

Mr Regmi said the Indian Red Cross Emergency team was working with authorities and helping with the evacuations from low-lying areas to relief centres further inland in the face of what he called a "monster storm".

The Indian Meteorological Department (IMD) categorised the storm, which formed in the Arabian Sea, as an "extremely severe" storm, upgrading it from "very severe".

The cyclone brought gusts of up to 210 kph that would put it on par with a Category three hurricane, one level below the IMD's super cyclone category.

Further down India's western coast, the cyclone has lashed India's financial hub of Mumbai and forced authorities to suspend operations at the city's airport and to close some main roads due to flooding.

Tracks on Mumbai's urban rail system, one of the world’s busiest, were also flooded. Two barges with over 400 people on board were adrift near the Mumbai coastline and vessels were sent to provide help, said the local branch of India's defence ministry.

As well as the 16 deaths reported in Maharashtra, Goa and Karnataka, more than 25 fishing boats were missing, a coastguard official told Reuters.

The Gujarat Maritime Board, the state’s port regulator, directed hoisting of signals VIII to X and indicated great danger, at ports in the state.

Authorities also fretted about the state's Asiatic lions, an endangered species found only in the Saurashtra region of Gujarat where the cyclone is expected to inflict most damage. 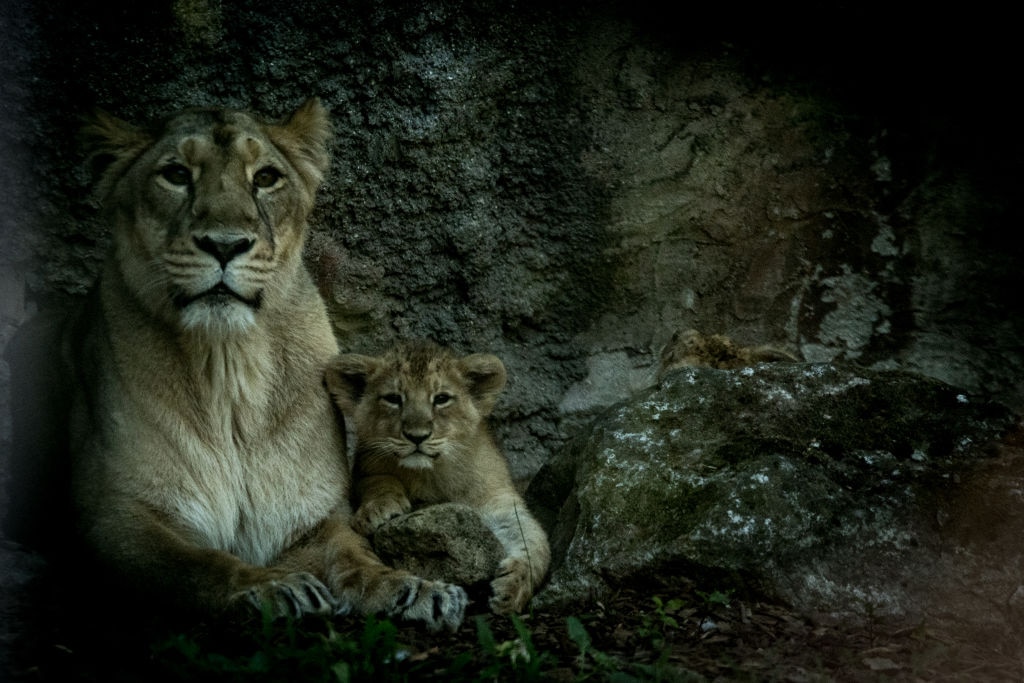 Two Asiatic lion (Panthera leo persica) female cubs born on April 29, 2020 play next to their mother during a presentation
Getty

"There are around 40 lions in some patches in coastal Saurashtra, and we are monitoring them," Shyamal Tikadar, Principal Chief Conservator of Forests in Gujarat, said.

"Some lions have already moved to higher grounds- we are keeping fingers crossed, and praying the lions will be safe," Shyamal Tikadar told Reuters.

Minister Rupani said all measures were being taken to deal with the situation.

"These are special circumstances," he said.

"The administration is busy with the COVID-19 challenges, and is now gearing up to deal with the impact of the cyclone," he added.

Gujarat and Mumbai both suspended their vaccination drives on Monday due to the cyclone.