Strong easterly winds are again expected on Thursday over the fireground in the Perth Hills. 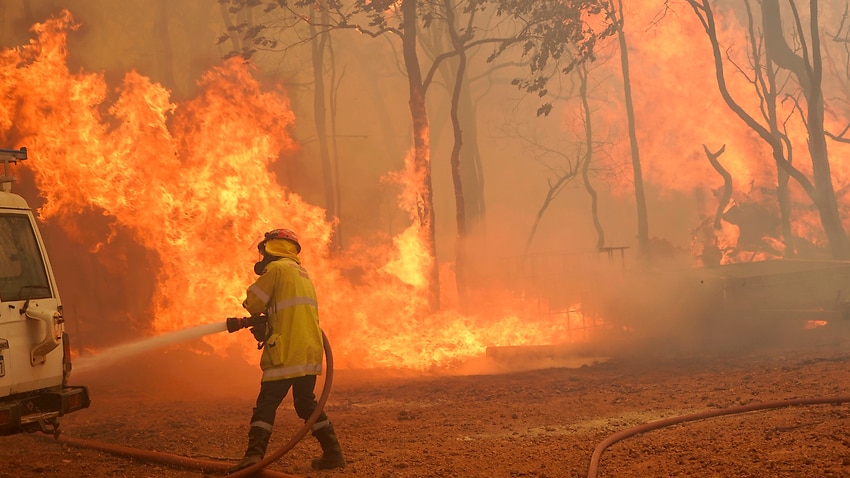 A firefighter attends a fire near Wooroloo, north east of Perth, Australia, on 2 February. Source: Department of Fire and Emergency Services via AAP

Fire retardant dropped from an air tanker has helped stop an out-of-control bushfire in Perth's northeast, but residents are still being told they are in immediate danger.

The massive blaze with a 126km perimeter is moving in a northwesterly direction along the city's coastal plain after destroying 71 homes near the hills town of Wooroloo on Monday night.

Residents in the suburbs of Shady Hills View and Bullsbrook - where the RAAF Base Pearce is located - have been told it is too late to leave.

The DFES said people in or around Clenton Road and Berry Road at Gidgegannup need to shelter in place or actively defend only if they are prepared to the highest level.

He said retardant dropped by an air tanker had helped protect the Shady Hills area.

"We had a number of properties which became under threat overnight," he told reporters on Thursday morning.

"The Shady Hills area was one of our biggest concerns, and the fire ran up the Avon Ridge, Avon Valley there into Shady Hills and was successfully stopped by the retardant line that we dropped yesterday.

"The large air tanker dropped 11 loads yesterday and a total of 200,000 litres of retardant."

Mr Sutton said strong easterly winds were again expected over the fireground on Thursday, "which will still test those boundaries on the western and northern side".

"We expect there to be some concerns today, so we ask members of the public to be vigilant," he said.

"We ask everyone, all members of the public, to please remain vigilant. This is going to be a long-duration incident. There's a lot of work to be done."

"We're facing disasters on two fronts - the devastating bushfires and the COVID-19 pandemic," he said, referring to a five-day lockdown for metropolitan Perth, the Peel region and the South West.

"The fire has devastated our community. We know that 71 homes have been lost and that number is expected to rise."

Up to 300 people waited in 35-degree heat at the centre in Swan View on Wednesday afternoon, unable to return to the fire zone and unsure if their homes had been destroyed.

The Weale family have three blocks and two properties in Brigadoon, and were forced to evacuate on Wednesday morning when conditions worsened.

Like many others, they face an anxious wait before they're allowed to return to check their homes.

"We have no indication of when we'll be able to return," Claire Weale told SBS News on Wednesday.

"There isn't really a timeframe for us. It's difficult to try and put anything in place ... we just don't know."

People whose homes have been severely damaged, or destroyed or who've been seriously injured in the fires will be able to access $1,000 Commonwealth disaster recovery payments from Thursday.

Disaster Recovery Allowance payments will also be available for people who've lost income because of the blaze.