A strong earthquake struck the Greek island of Crete early Monday, killing a man who was working in a church that collapsed. 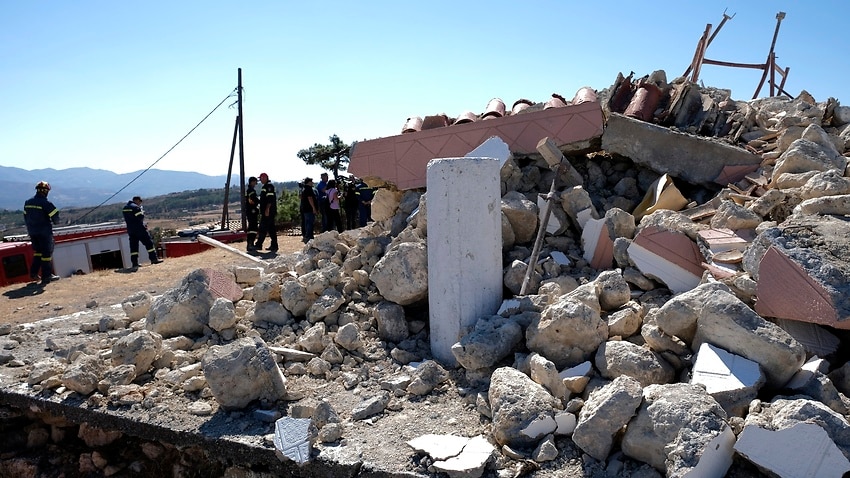 A demolished Greek Orthodox church of Profitis Ilias after a strong earthquake in Arkalochori village on the southern island of Crete, Greece. Source: AP

A strong earthquake struck Crete early Monday, killing a man, injuring nearly a dozen others, damaging a town and sending panicked residents rushing into the streets on Greece's largest island.

The quake, measuring magnitude 5.8 according to Greece's seismological observatory, killed a man who had been repairing a church.

The 62-year-old was crushed by rubble in the small agricultural town of Arkalochori, where nearly a dozen were hurt, 30 kilometres southeast of the island capital of Heraklion.

Evangelia Christaki, whose husband is disabled, said she just had enough time to flee as her house shook.

"I grabbed my husband and we rushed out, everything in the house was falling," the 62-year-old, who works at a supermarket, told AFP as the couple sat under a tree for shade.

They were joined by her 96-year-old mother-in-law, whose home collapsed.

"Fortunately, our home was not too badly damaged," Ms Christaki said.

"But the authorities have told us to stay outdoors over the next hours. In any case, we are so scared," she said.

'We are so scared'

The US Geological Survey measured the quake at a magnitude of 6.0.

The tremor struck at 9:17 a.m. (0617 GMT), 23 kilometres from the Crete capital of Heraklion. Dozens of aftershocks followed.

"So far, one man is dead and 11 people are in hospital suffering mostly from fractures, according to a spokesman from the National Centre for Emergency Care.

Images on ERT public television showed old buildings that had collapsed in Arkalochori and surrounding villages near Heraklion.

"It's an earthquake that we did not expect, for the moment there are aftershocks of 4.5," said Efthymis Lekkas, the head of Greece's quake protection agency, quoted by the ANA news agency.

However, experts said the quake was likely to be the main one.

Firefighters carry the body of a victim following the earthquake, in Arkalochori village on the Crete island, on the 27th of September, 2021. Source: AFP

The minister for civil protection Christos Stylianides said tents with a capacity to host 2,500 people would be deployed before nightfall.

"We will provide shelter and food so nobody will face hardship," Mr Stylianides told reporters at the stricken area.

He added that officials needed to inspect neighbouring villages which have a large number of old stone buildings.

The Athens observatory said the epicentre of the quake was 346 kilometres south of Athens at a depth of 10 kilometres.

Greece is located on a number of fault lines, and is sporadically hit by earthquakes.

The last deadly quake in the country occurred on the 3rd of March in the central town of Elassona, killing one person, injuring 10 and causing major damage.

Last October 30 a magnitude 7.0 hit in the Aegean Sea between the Greek island of Samos and the city of Izmir in western Turkey.

Most of the damage was in Turkey where 114 people were killed and more than 1,000 injured.

In Greece, two teenagers were reported dead on Samos.