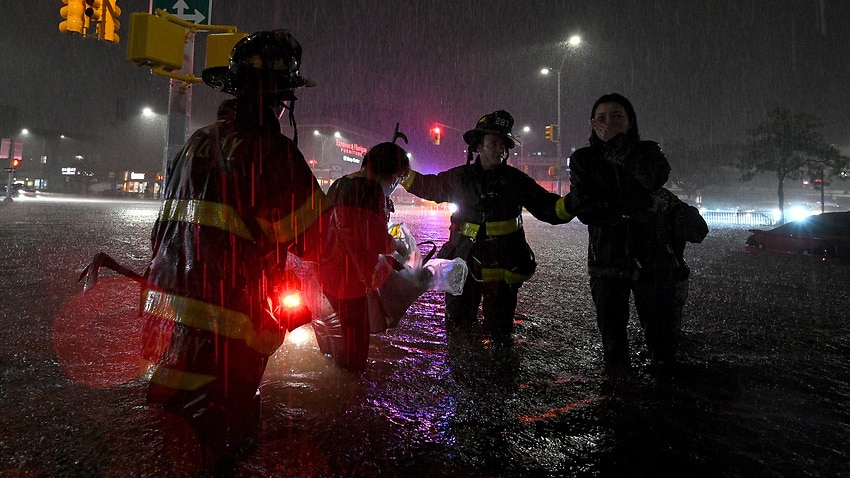 Members of the FDNY rescue a woman from her car stalled due to flash flooding after remnants of Hurricane Ida in the New York City, 1 September, 2021. Source: Anthony Behar/Sipa USA

At least seven people have died in New York after the city was inundated by flash flooding, police said on Thursday, as Storm Ida wreaked havoc on the northeast United States, forcing flight cancellations and state of emergency declarations.

Ida slammed into the southern state of Louisiana over the weekend, bringing severe flooding and tornadoes as it blazed a trail of destruction north.

New York state governor Kathy Hochul declared an emergency as the remnants of the storm caused massive flooding in the country's financial and cultural capital, leaving the boroughs of Brooklyn and Queens badly hit.

Police did not say how the seven deaths in the city occurred.

State governor Phil Murphy has also declared a state of emergency in neighbouring New Jersey, where CNN reported at least one person was killed in the city of Passaic, bringing the confirmed death toll from Ida to 15.

"We're enduring an historic weather event tonight with record-breaking rain across the city, brutal flooding and dangerous conditions on our roads," Mayor Bill de Blasio said in a tweet as he declared a state of emergency in the city.

Hundreds of flights have been cancelled at nearby LaGuardia and JFK airports, as well as at Newark, where video showed a terminal inundated by rainwater.

Flooding has closed major roads across multiple boroughs including Manhattan, The Bronx and Queens.

Streets were transformed into rivers while the city's subway stations were also flooded, and the Metropolitan Transportation Authority reported services were effectively shut down.

As footage showed cars submerged on streets across the city, authorities urged residents not drive on flooded roads.

"You do not know how deep the water is and it is too dangerous," the New York branch of the National Weather Service (NWS) said in a tweet.

The NWS recorded 80 millimetres of rain in Central Park in just an hour - the area's wettest hour on record.

"Significant and life-threatening flash flooding is likely from the Mid-Atlantic into southern New England," the NWS said in a bulletin, adding that three to eight inches of rain could drench the region through Thursday.

In Annapolis, 50 kilometers from the US capital, a tornado ripped up trees and toppled electricity poles.

The NWS warned the threat of tornadoes would linger, with tornado watches in effect for parts of southern Connecticut, northern New Jersey, and southern New York.

"This is extremely dangerous and potentially deadly flash flooding ongoing in Somerset County, as well as others in the area," the NWS account for the Philadelphia metropolitan area tweeted late Wednesday, along with a video of a car trapped in churning water.

Ida is expected to continue steaming north and bring heavy rainfall on Thursday to New England, which was also hit by a rare tropical storm in late August.

US President Joe Biden is due to travel Friday to Louisiana, where Ida destroyed buildings and left more than a million homes without power.

Hurricanes are common in the southern United States, but scientists have warned of a rise in storm activity as the ocean surface warms due to climate change, posing an increasing threat to the world's coastal communities.