Extreme to severe heatwave conditions forecast for the weekend are expected to increase the fire danger in parts of Australia.

Residents in NSW and the ACT are being urged to brace for "catastrophic" fire conditions on Saturday as the temperature rises.

Meteorologist Andrea Peace from the Bureau of Meteorology (BoM) said it will be important to observe the impact from the weather front coming from down south. 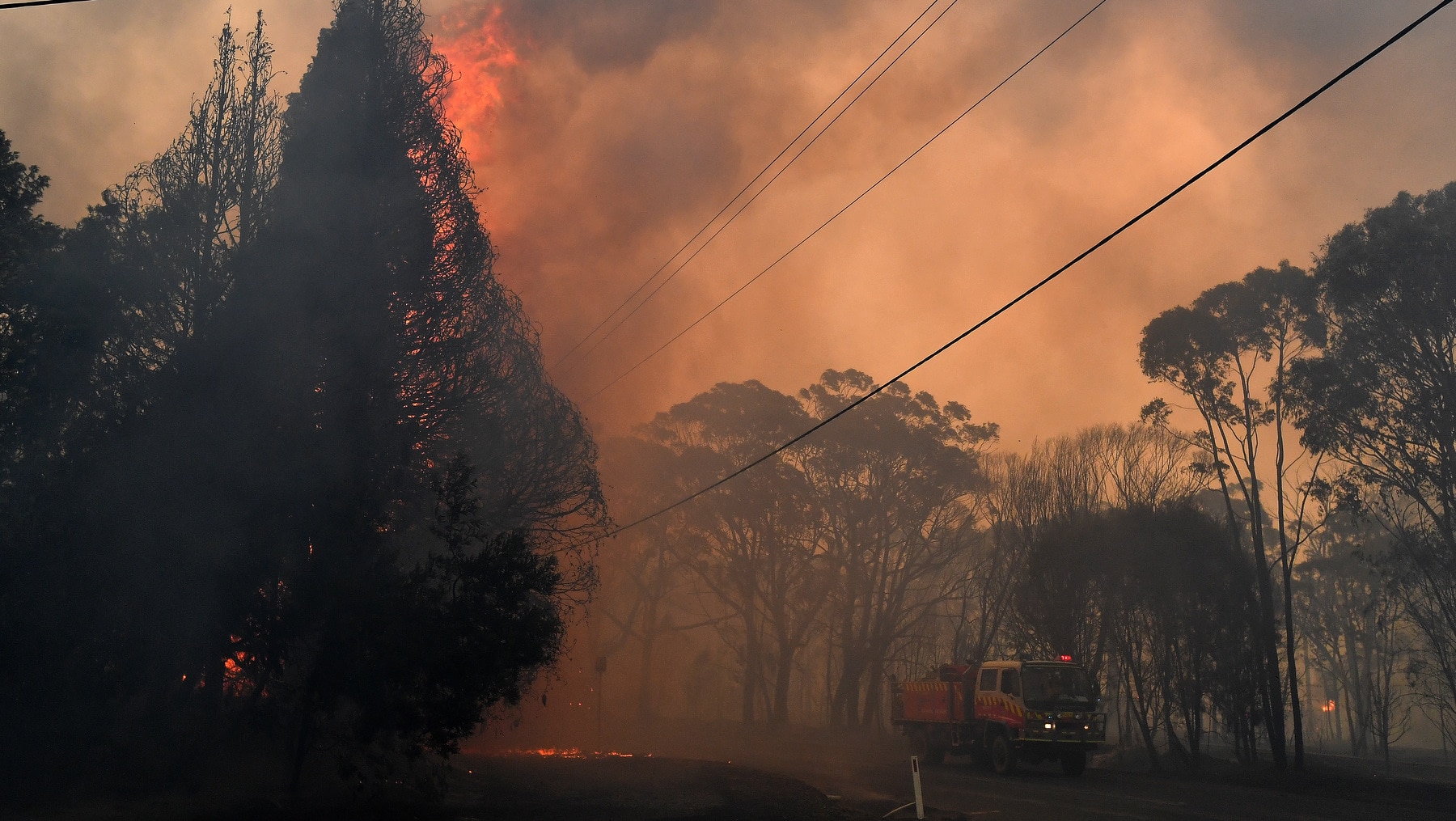 Fire threatens a number of communities in the south west of Sydney on 19 December 2019.
AAP

"The strong gusty southerly creates a really dangerous period for the fire grounds because it rapidly changes the direction of the fires there.

"We could see gusts up to 100 km/hr, probably the strongest around the coastal fringe but still further inland, a very strong period of southerlys, which is as I said is likely to change the direction of the fires and make for a really dangerous period of fire weather condition." 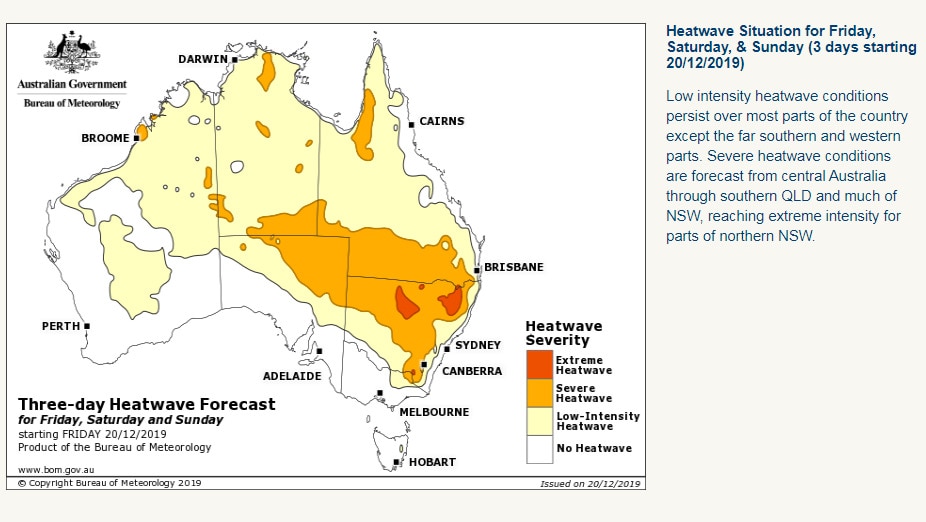 Many parts of Australia are experiencing severe heatwave conditions.
Bureau of Meteorology

The bureau's Adam Morgan said many parts of the country are experiencing elevated fire dangers and grappling with the health impacts of smoke.

NSW residents have been told to delay travelling this weekend and avoid isolated bush areas as the state prepares for the horror conditions, with authorities "fairly sure" more homes will be lost.

"It is a fairly sure thing we will lose homes tomorrow. It will be a miracle if we didn't," he said.

Temperatures are set to soar into the mid-40s and there will be strong winds on Saturday when the Greater Sydney, Illawarra-Shoalhaven and southern ranges regions face catastrophic danger.

Meanwhile, Canberra is forecast to reach 41 degrees Celsius with smoke haze from nearby fires continuing to blanket the city.

A week-long state of emergency has been declared in NSW granting special powers to RFS Commissioner Shane Fitzsimmons and a statewide total fire ban remains in place. "Do not put yourself near an isolated bush area. If your home is directly on the bush and it's not got a huge break you should think about relocating."

The deputy commissioner said homeowners shouldn't expect a fire truck, a plane or a warning "because things move really quickly".

Authorities are asking people to avoid holiday travel on Saturday because they don't want motorists stranded on major highways when firefronts hit. NSW Police Force Deputy Commissioner Gary Worboys said motorists may be asked to turn around if they try to enter dangerous areas.

"People should consider staying at home tomorrow and make their travel arrangements for Sunday, Monday and Tuesday," he told reporters.

"They still have time in terms of Christmas Day. Tomorrow will be a difficult day."

Mr Rogers said it was possible the Hume Highway would be closed by the Green Wattle Creek fire southwest of Sydney.

Due to forecast deteriorating bushfire weather conditions in the Blue Mountains, Springwood Hospital will be relocating patients to Nepean Hospital. Read more at the link... #NSWFires

His advice for people living in bushfire-prone areas is simple: don't be there.

Residents should instead go to the beach, a shopping centre or somewhere else safe.

Almost 800 homes have been lost in NSW so far this bushfire season and that number is almost certain to rise on Saturday.

"It's a fairly sure thing we will lose homes somewhere tomorrow," Mr Rogers said

"It would be a miracle if we didn't." 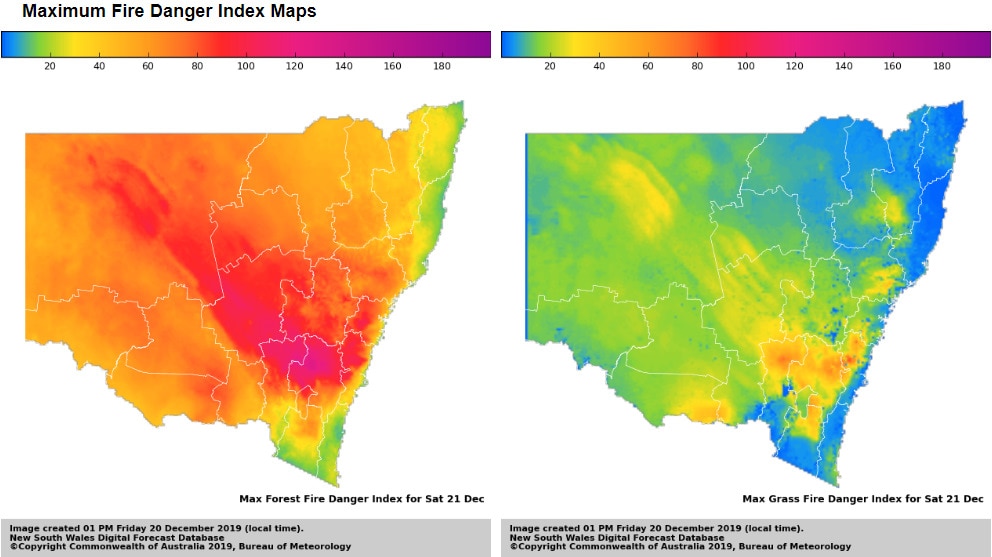 Week-long state of emergency in NSW

The catastrophic rating comes after two firefighters were killed in the battle to contain a blaze that ripped through villages southwest of Sydney on Thursday. 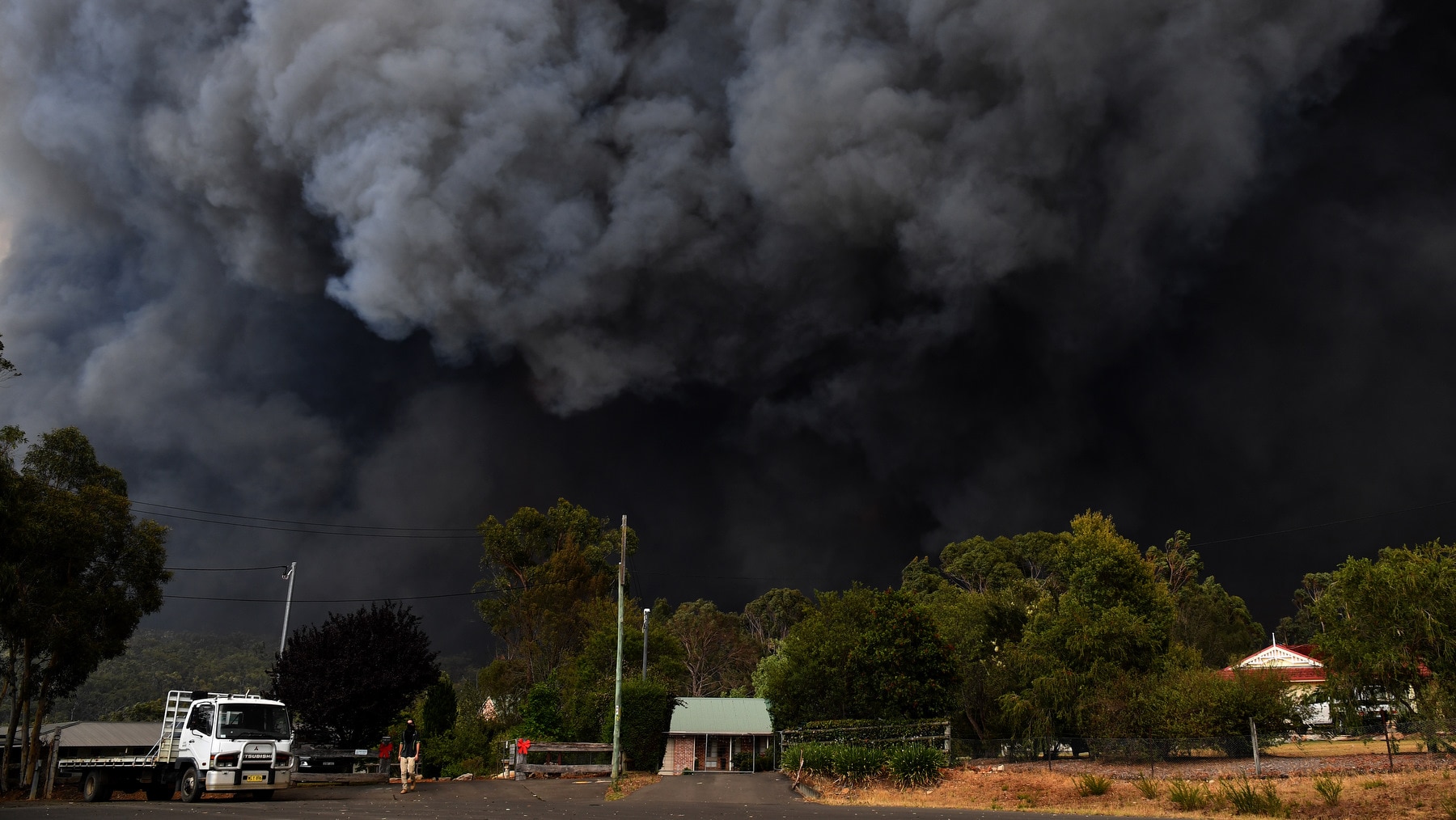 The Green Wattle Creek Fire threatens a number of communities in the south west of Sydney on 19 December 2019.
AAP

Geoffrey Keaton, 32, and Andrew O'Dwyer, 36, from the Horsley Park brigade were in a truck convoy near the town of Buxton when a tree fell causing their vehicle to roll off the road.

The NSW RFS officially says 20 homes may have been lost in the area but Mr Rogers has previously acknowledged there are reports 40 buildings were destroyed.

"We will face circumstances that if we do not prepare over the coming 12 hours to 24 hours, there could be more human life lost," he said. 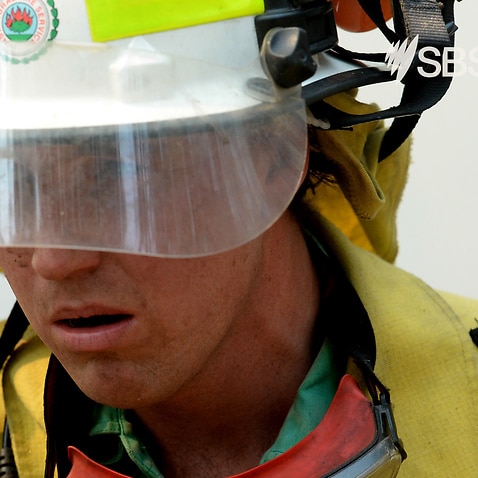 He urged residents to protect themselves and firefighters by seeking refuge early.

"We can rebuild homes and structures, but we cannot save lives if you do not do what they say to do. We could lose lives tomorrow if you do not prepare."

He said aid for affected families will be made available.

"Those people whose incomes have been impacted will have 13 weeks’ worth of income support from the Federal Government, not just employees but also small businesses and we’ll continue to work with the New South Wales Government and we’ve already rolled out a number of packages with them already."

Under the Disaster Recovery Payments, people impacted will receive $1000 per adult and $400 per child.

"That’s just the start. That’s just to allow them to have some dignity, to get them through the coming couple of days to have the essentials of life that they need. To make sure that they have some comfort in not worrying about having a few dollars in their pockets."

A person is dead and another unaccounted for as devastating bushfires rage through South Australia's southeast, Adelaide Hills and Yorke Peninsula.

Authorities have confirmed one person died in a car crash near the scene of a blaze at Lameroo, in SA's southeast and another person is unaccounted for in the hills.

Emergency warnings remain in place for a number of fires including those at Lameroo, one near Maitland on Yorke Peninsula and one at Virginia, north of Adelaide.

There were multiple reports of homes and other buildings on fire in the worst blaze which was sparked at Cudlee Creek in the hills.

The fires came on SA's worst day for fire conditions so far this summer with catastrophic risk declared in six districts.

The state was being hit by a combination of extremely high temperatures and rising winds with the potential for thousands of lightning strikes in the afternoon.

A gusty wind shift during the day would cause added dramas with the CFS warning that if fires start, they would be almost impossible to contain.

Temperatures in some parts of the state were expected to get close to 50C with Adelaide forecast to have a top of 46C which would make it the city's hottest- ever December day.

Rising winds on the Yorke Peninsula also whipped up dust with police warning that visibility was low.

Almost 70 fires are now burning across Queensland, jumping from 55 reported on Thursday, as the fire threat deepens.

Crews are braced for challenging conditions as a strong upper ridge sweeping across the southeast combines with fresh east northeasterly winds on Friday.

The volatile conditions have prompted the weather bureau to reissue a severe fire warning for the Darling Downs and Granite Belt, Central Highlands and Coalfields, and the eastern parts of the Warrego and Maranoa districts on Friday.

Conditions are forecast to improve along the Queensland coast into next week but residents across the state should remain on alert about the several fire and heat warnings, the Bureau of Meteorology says.

"It is vital not to become complacent when hearing these continued warnings,' forecaster Rosa Hoff told media on Friday

"The danger is as real as it was the first day we experienced it in Queensland."

A statewide smoke warning has been issued for Victoria as the state swelters through its hottest December day on record, with Hopetoun in the state's northwest cracking 47.4C.

A statewide smoke warning (air quality) has been issued for Victoria. This video shows the smoke from NSW fires coming down across the state. There is also smoke around from the fires in East Gippsland. Video: BOM

The Bureau of Meteorology said the forecast exceeds the previous record of 46.6C set at Robinvale on New Years Eve 1976.

Melbourne's temperature, meanwhile, will peak at about 44C, while the Mallee and Wimmera regions are expected to hover around 46-47C.

Most of the state is also blanketed in smoke from NSW, which is reducing visibility to about 1 km in some places, the bureau said.

A total fire ban is in place for the state, with the risk of fire 'very high' to 'extreme'.

While the hot, windy weather makes for ideal washing weather, the state government is urging people to turn of their washing machines and other electricals to take as much pressure off the electricity grid as possible.

There will be no reprieve from the heat until a cool change at about midnight.

"The cool change is still on track and is still later than anyone would want," BOM senior meteorologist Keris Arndt said.

"We will slowly cool down with the sun going down but we won't have any cool air until about midnight."

People are being urged to check on their neighbours, the elderly and expectant mothers in the extreme heat, and reminded not to leave children locked in cars on hot days.

The Feed 39 mins ago

'I want to be brave like you': Young boy asks US Democrat Pete Buttigieg how to tell world he is gay