Doctors for Refugees claims the government is stopping an injured Rohingya refugee on Nauru from receiving the treatment he needs.

The Australian Border Force (ABF) is not listening to the request of doctors on Nauru to urgently transfer an injured Rohingya refugee to Australia, the president of advocacy group Doctors for Refugees has told SBS News.

"Yet again we see the ABF overriding the medical opinions of the treating doctors, in this case the doctors in Nauru and Nauru Hospital itself," Dr Barri Phatarfod said.

Abu Bakar, a 28-year-old from Myanmar, sustained injuries to his head after a motorcycle accident at the weekend on the island, where the Australian government's offshore asylum seeker processing centre is located.

Local doctors have said Mr Bakar requires urgent surgery, according to Dr Phatarfod. The ABC reported on Tuesday the Nauru Hospital had made a formal request for a transfer.

Dr Phatarfod told the ABC on Tuesday Mr Bakar was "bleeding from his ear, vomiting — these are really, really ominous signs of a moderate to severe brain injury". Doctors for Refugees obtained his medical records which show an Australian-based neurosurgeon and faciomaxillary (face, mouth and jaws) surgeon also reviewed his CT scans and stated on the basis of these that he didn't need immediate surgery.

But the surgeons, who did not include their names on the report, added, "clinical correlation is strongly recommended", meaning there can't be an accurate appraisal of a person's injuries without seeing them.

"Neither of these surgeons left Australia to examine him in Nauru," Dr Phatarfod said. "Neither specialist has made any comment about whether or not he should be transferred."

SBS News is awaiting clarification from the Department of Immigration and Border Protection about whether it employed them to conduct this assessment. Dr Phatarfod said Mr Bakar "needs to be transferred to a facility that would be able to deal with any deterioration in his condition, for example, if his haemorrhage continued, if his breathing worsened or if he developed any infection.

"All these are quite likely scenarios," she said.

Dr Phatarfod said Mr Bakar did not need to be transferred to Australia "if the political agendas prohibit this", but a hospital in any country that had qualified neurosurgeons and reliable medical facilities.

"Specialist equipment and professionals could, in theory, be transferred to monitor the man in Nauru but as the electricity has already gone out a number of times while the man has been in critical condition, I can't imagine why any Australian specialist would want to put him or herself in that position," she said.

Last month, Dr Nick Martin, a former surgeon lieutenant commander with the British Royal Navy, who was contracted by the Australian government to work on Nauru, alleged evacuation deadlines set by him and his staff were regularly "reached and breached".

The Department of Immigration and Border Force has been contacted for comment.

In a statement published by the ABC on Tuesday, a spokesperson from the department said Mr Bakar was "receiving appropriate medical care".

"Decisions about medial transfers are made on a case by case basis according to clinical need in consultation with the contracted health services provider and the Government of Nauru," they said.

"The department does not comment on individual medical circumstances." 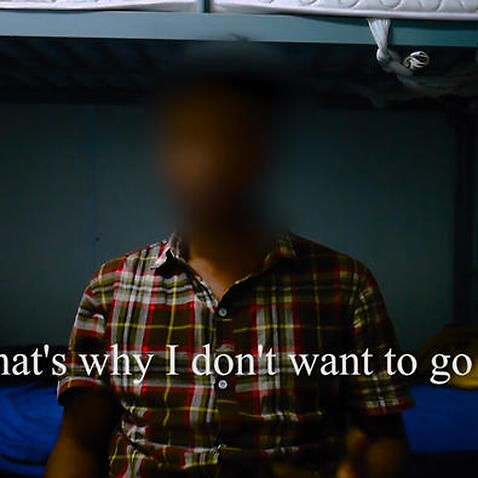 Never-before-seen footage from inside Nauru screens at art show