The Australian swimmer has followed up her historic 400m freestyle gold medal at the Tokyo Olympics with another win, surging home to claim the 200m freestyle in Olympic-record time. 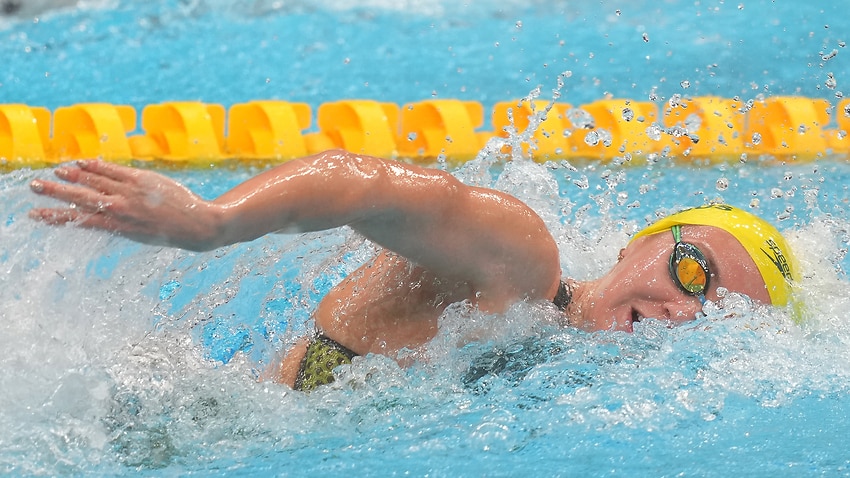 Australian swimmer Ariarne Titmus has stormed home to win her second gold medal of the Tokyo Olympics in the women's 200-metre freestyle.

Titmus followed her stunning 400m freestyle triumph on Monday with victory in the 200m in Wednesday's final.

Titmus' 200m final was billed as another match race against US great Katie Ledecky.

It's a golden double 🥇

Ariarne Titmus adds to her #Tokyo2020 gold medal collection with a stunning performance in the 200m Freestyle Final.#7Olympics | #Swimming pic.twitter.com/ABGanvNYyL

Haughey held the lead until the last 20 metres.

But Titmus finished in a flurry to achieve a nail-biting win in an Olympic record time of one minute and 53.50 seconds.

Titmus joins Shane Gould in 1972 as Australian woman to complete the 200m-400m golden double at an Olympics.

She will meet Ledecky once more at the Tokyo Games, over 800m, with the American the red-hot favourite over the longer distance.

With the event returning to the Olympic rowing schedule after almost a 30-year absence, the Australian women's coxless four crew of Rosie Popa, Lucy Stephan, Annabelle McIntyre and Jessica Morrison stormed to gold.

The Australians held off the fast-finishing Netherlands crew, while Ireland won bronze.

The Australian men's coxless four crew of Alex Purnell, Spencer Turrin, Jack Hargreaves and Alex Hill made it a golden rowing double with a gold in their event.

While Australia won gold in the men's four in 1992 and 1996 to earn the ‘Oarsome Foursome’ tag, Great Britain had won the event at every Olympics since.

The Aussies crossed the line in an Olympic best five minutes 42.76 seconds, with Romania 0.37 seconds behind.