Advocates for drug decriminalisation in Australia say current drug laws are not making the community safer and are preventing people from seeking help for drug addiction. 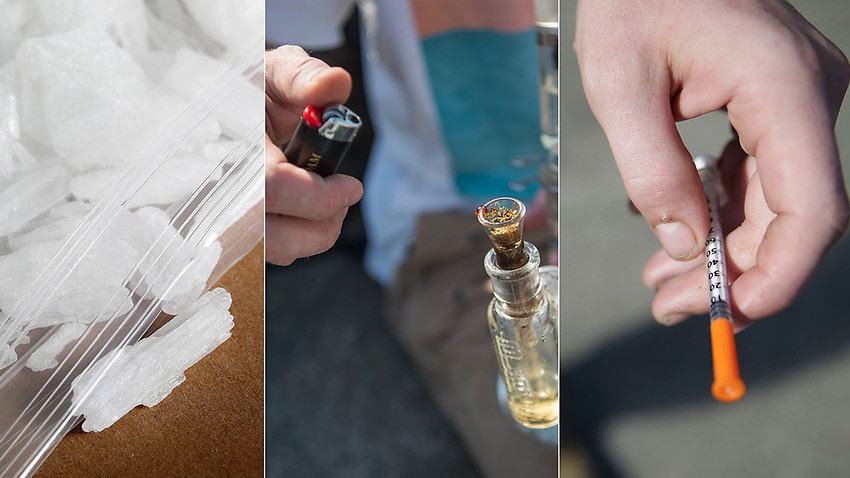 The NSW Special Commission of Inquiry into the drug 'ice' has heard calls for the removal of criminal sanctions for personal drug use and possession.

The recommendation echoes calls made earlier this year by the United Nations to end criminalisation and treat drug use and addiction as a health and social issue rather than a criminal one.

Now agencies and workers with drug-users in Australia are renewing their calls for change.

Take Control is an advocacy group calling for an end to criminal charges for personal possession that make getting help harder.

Pure methamphetamine in rock from is known as ice. Source: SIPA USA

Matt Noffs is a spokesman for Take Control and the CEO of the youth empowerment agency, Ted Noffs Foundation.

"The best thing to do when we're thinking about decriminalisation is to simplify it," he said.

"Think about it like this: locking them up does not fix the problem.

"But when they've assaulted someone or done something else, they've committed another crime outside of the drug use that needs to be treated, absolutely.

"That needs to be punished, but punished separately."

A position paper released earlier this year by the United Nations on drug-related matters called for the promotion of alternatives to conviction and punishment in appropriate cases, and for better protection of the human rights of people who use drugs.

World-class services but not enough to go around

Melanie Walker is CEO of The Australian Injecting and Illicit Drug Users League.

Ms Walker said Australia's rehabilitation, counselling and pharmacotherapy services are world-class but the criminalisation of personal drug use results in stigma and discrimination, stopping people from coming forward to get help.

"We have got some international evidence, we have some great national policy frameworks, now we just need governments that are willing to change their counterproductive laws and allocate some resources so the things that we know can work can go forward to achieve better outcomes for everyone," she said.

Ms Walker said figures from the Drug and Alcohol Resource Centre showed between 200,000 and 500,000 people a year are turned away from drug treatment services in Australia because there isn't capacity in the system to take them.

A fentanyl user who didnt want to be identified holds a needle. Source: The Philadelphia Inquirer

Ms Walker said the stigma associated with drug use is one of the reasons more services are not on offer.

"One in two people who are needing drug treatment in Australia actually don't get it," she said.

"And when you consider this situation in light of other medical conditions, if someone had a heart attack and presented to the hospital and half of those people were turned away and were told they could not get assistance, I think you can see how stigma and discrimination comes into play in terms of resourcing at the systemic level."

"So what we see is the majority of drug and alcohol treatment sector is either government or non-government organisations and all of those agencies are struggling to meet demand at this point."

Stigma and discrimination stopping people from getting help

Chris Gough is the Executive Director of the Canberra Alliance for Harm Minimisation and Advocacy.

Mr Gough said when people are stigmatised and discriminated against it becomes internalised - resulting in people thinking they don’t deserve any services.

“So what I see is people who are disengaging with society because their problematic drug use is causing social isolation," he said.

"Really everyone has a different situation and a different set of problems but people who are deeply withdrawn and who need us to build some trust so that they can then engage with health care services."

A man smokes a bong with medical cannabis during a protest. Source: dpa

He said most people who turn up to the centre seeking treatment are forced to wait for up to three months to get access to a rehabilitation place.

This results in many people disconnecting with the system, delaying treatment or overdosing during the waiting period.

Mr Gough said he's often surprised by the strength of many of the people who walk through his doors, some resorting to drugs as a coping strategy to deal with past trauma.

"What we must remember is the people with problematic drug use often have extremely traumatising experiences behind them,” he said.

“When I see people coming through the front door of CAHMA and I listen to their stories, I sometimes think to myself I don't think I would have survived the things that these people have gone through yet here they are struggling on and trying to engage with our service."

Other recommendations made to the NSW Ice Inquiry are for more investment in specialist drug and alcohol services and expanding the use of medically supervised drug consumption facilities.

The Special Commission of Inquiry into the drug Ice is due to hand down its findings in January 2020.