Australia's oldest human remains, known as Mungo Man, have been returned to their traditional owners 40 years after they were removed from the Mungo National Park to be studied.

Australia's oldest known human remains have been handed over to the traditional owners of the land on which they were discovered 40 years ago.

At a ceremony at the Australian National University in Canberra today, the remains of Mungo Man were carefully handed over to the traditional owners of the Willandra Lakes region.

“I’d like to see him reburied and laid to rest at Mungo where he was found,” Ngyiampaa traditional owner Aunty Joan Slade said.

The remains were discovered in 1974, by geologist Jim Bowler, exposed by the wind in the sand dunes of the dry Lake Mungo in outback New South Wales.

Science has confirmed that the remains, are about 40,000 years old.

Along with the remains of Mungo Lady, they confirm the millennia of inhabitation of Australia by its Indigenous peoples and their connection to country.

In the 40 years since the discovery of Mungo Man, there has been heated debate over which group owns him, how the remains should be cared for and whether they should have been taken in the first place.

“I don’t think people have rights to take him away and put him in boxes and store him,” Aunty Joan said.

But the remains were exposed to wind and wildlife Professor Bowler said.

“People now say ‘You should not have taken them away’,” he said.

"We had no option but to take them away. The sheep would have trampled on them; they would’ve been gone forever."

Professor Bowler said when he was doing his research at Lake Mungo in the 1970s there were no traditional owners to consult with.

“We might just have to put up with the criticism that, yes, we took them away without permission," he said.

"We had no other option, so what do we do? That’s my dilemma. It actually comes down to a basic principle here: the big contribution of Mungo and Mungo man is bridging the gap between Indigenous people living in the past and white cultures today." 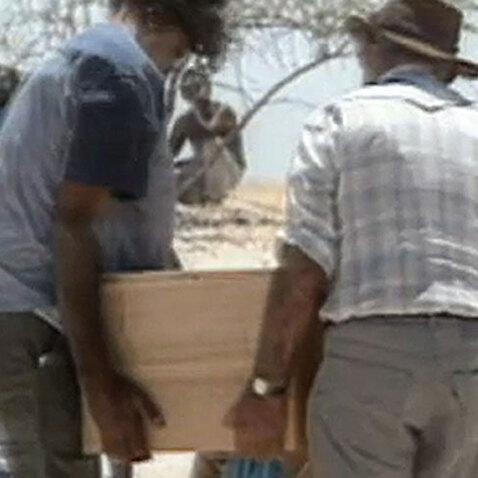 But, like the traditional owners, Professor Bowler has been agitating for the remains to go home.

“My main preoccupation is to see that they go home under the care of traditional people," he said.

"They still have the possibility of making a scientific contribution in the future. This is an issue the traditional owners will be asked to confront.”

At the handing over ceremony in Canberra, ANU Vice-Chancellor Professor Ian Young apologised to the traditional owners.

“We recognise that the removal of these ancestral remains caused ongoing grief to your communities and we apologise unreservedly for this,” he said.

“We sincerely hope that this will be the beginning of a healing process for your communities.”

“They can grow up to find out things about him themselves and I want them to pass it on to theirs.”

After briefly regaining control of the remains, the traditional owners made the decision to temporarily put them into the care of the National Museum before he begins his long journey back to Mungo National Park and his final resting place.