As Europe attempts to resolve its migrant crisis, Prime Minister Tony Abbott has had to defend Australia’s own asylum seeker policy.

As attention remains on Europe, which is in the midst of its worst ever migrant crisis, focus has also turned to Australia’s border protection program.

An opinion piece in the New York Times has criticised Tony Abbott's asylum seeker policies: describing them as 'inhumane' and of 'dubious legality'.

It forced the Prime Minister to defend Operation Sovereign Borders. 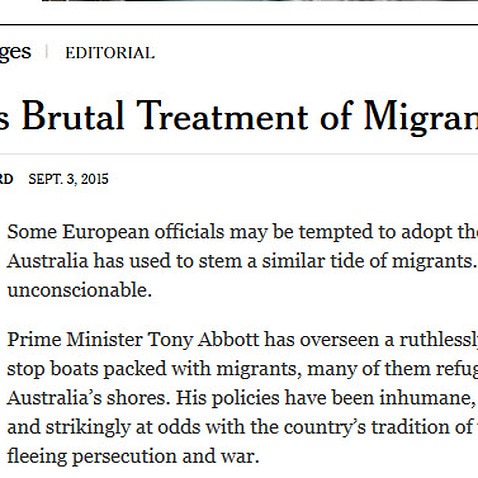 “We saw, yesterday on our screens a very sad and poignant image of children tragically, tragically dead at sea, in illegal migration. And thankfully we've stopped that in Australia,” Mr Abbott told ABC Radio this morning.

“We’ve said to the people smugglers ‘your trade has closed down’,” he added.

However the CEO of Welcome to Australia, Mohammad Al-Khafaji, said the country needs to pull its weight and do more to help resettle refugees.

"I think Australia needs to do its fair share and it needs to restore the humanitarian intake to at least 20,000 people per year,” Mr Al-Khafaji told SBS World News.

“We're seeing more people displaced by conflict around the world than at any time since the Second World War.”

Mr Shorten also called for more support for the United Nations dealing with the humanitarian crisis in Europe.

Child refugee advocate Amrit Versha believes putting a face to each migrant is a step in the right direction.

"It's about giving people the right opportunities, and it's looking at people as people as humans,” she said.

“And then providing them with that opportunity...that's what I believe in.”