Save the Children says the only thing preventing the federal government from repatriating Australian children stuck in refugee camps in north-east Syria is political will. 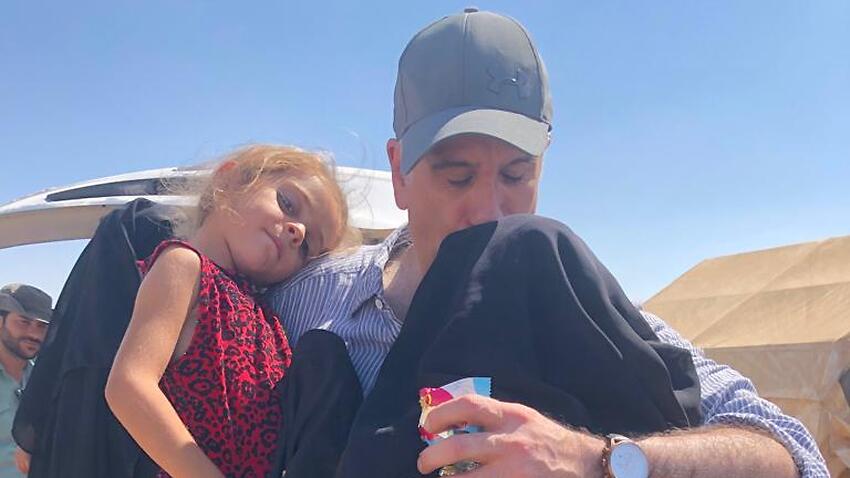 Kamalle Dabboussy visited the Al Hol camp in Syria two years ago and reunited with his daughter and grandchildren. Source: Supplied

For the past two years, seven-year-old Aisha’s home has been a squalid detention camp in north-east Syria.

Along with her two younger siblings, aged five and two, the Australian girl lives in a tent with 1,710 other children trapped in the Al Roj camp.

The conditions are dire. Her family in Sydney says she sleeps on a cement floor, sometimes has a wash with a plastic bag or bottle filled with water, and has limited access to education or medicine.

She’s had numerous infections, had teeth pulled out without any anaesthetic, and has nerve damage from glass pulled out of her foot.

Kamalle Dabboussy's grandchildren when they were detained at the Al Hol refugee camp in north-eastern Syria. Source: Supplied

“She says, ‘What's life? Why is life worth living if we're living here?’”

Mr Dabboussy says the longer his grandchildren are left to languish there, the worse the situation gets.

”This makes no sense. They are Australian, they need to come home,” he said.

There are 40,000 children in Al Roj and another camp Al Hol, among them 47 Australians. They are children of refugees stranded after the conflict with the so-called Islamic State in Syria.

So far, the government has repatriated only eight Australian children from the camps.

But the issue is complicated: the Australian government has expressed concern that women in the camp could retain radicalised views, with some being former brides of IS fighters.

Mr Dabboussy said his daughter Mariam and her three children became trapped in the camp after Mariam was coerced into travelling to Syria in 2015.

“She was taken across the [Syrian] border at gunpoint,” he said.

“She didn't go willingly, she found herself in that situation … it's been on the public record for over two years, and the Australian Government haven’t [disputed] that.”

Save the Children says not all the women in the camps are so-called “IS brides” - some of them lived unwillingly under IS rule, while others are of the Yazidi minority who were captured and enslaved by the group.

The Al Roj camp in northeast Syria. Source: Save the Children

But the NGO is extremely concerned that children are being unfairly punished for the actions of their parents.

“That's not Australian, and we need to take responsibility, bring these children home, give them the sorts of support - the health care, the education - that they can get in Australia,” Save the Children Australia chief executive Paul Ronalds told SBS News.

“They're Australia's responsibility, and Australia should step up.”

Mr Ronalds says the situation for children in the camps is becoming increasingly dire.

Two children are dying in the Al Hol and Al Roj camps every week from preventable causes such as malnutrition and disease, as well as fires that occasionally sweep through the camps. There have been more than 17 murders in the camps so far this year.

“The only thing that is preventing governments from bringing the remaining children home is political will,” Mr Ronalds said.

Mr Dabboussy says it’s “gut-wrenching” because about 40 Australians who flew to Syria and Iraq to fight or support IS have managed to return home, but women and children are being barred from doing so.

“[The government] seems to worry about the women causing mass casualty events or causing issues, but the men don't face this level of scrutiny, which is unbelievable,” he said.

“So, I feel there's a double standard being applied and an inconsistency.”

He says time is running out.

“The fate of these children's future, their education, their health, their death or otherwise rests solely in Canberra, and they are the ones that need to take action today rather than tomorrow.”

The Department of Foreign Affairs and Trade said the federal government remained "deeply concerned" about the situation in the camps.

"Advice and information relating to Australians, especially women and children, in internally displaced persons camps in northeast Syria informs our understanding of the current situation on the ground," a spokesperson said in a statement.