A surfer punched a shark as it attacked him on the NSW north coast.

The 52-year-old Evans Head man, named in media reports as Craig Ison, is undergoing surgery after suffering injuries to his legs and hands when the shark attacked him during an early morning surf at around 6am today.

Emergency services were called to Main Beach at Evans Head at around 6.15am on Friday, to find the man with wounds to his legs and hands. 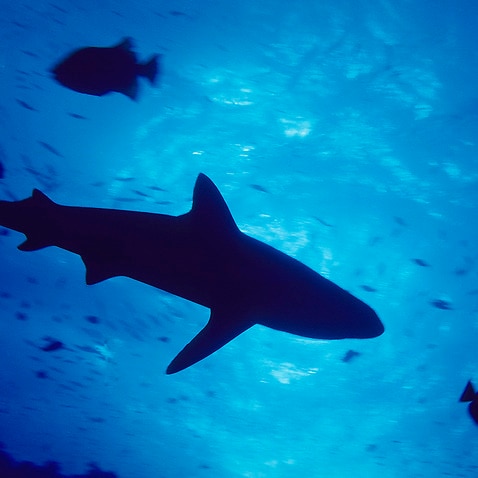 How many people do sharks kill in Australia each year?

Mr Ison was treated on the beach, and is being transported to Lismore Hospital in a serious but stable condition.

A police officer is driving the ambulance while paramedics work on the man en route to the hospital, police said.

Detective Inspector Cameron Lindsay told reporters in Ballina the quick thinking of another surfer and beach walkers who stemmed the flow of blood may have saved Mr Ison's life.

The beach, which is not patrolled in winter will remain closed, a Surf Life Saving NSW spokeswoman told AAP.

Earlier this month a bodyboarder was mauled by a shark at Ballina's Lighthouse Beach, suffering serious injuries to his lower legs.

In February, a large great white shark tore the legs off 41-year-old surfer, Tadashi Nakaharaa, in a fatal attack at the neighbouring Shelly Beach.

July 25, 2015: Man is killed while reportedly diving for scallops off Tasmania's east coast. It is believed the man was diving with his daughter, who saw the attack and surfaced to fire a distress flare.

July 2, 2015: Matthew Lee, 32, is mauled by a shark, suspected to be a great white shark at Lighthouse Beach, near Ballina, in northern NSW. He suffers critical leg injuries but survives.

December 29, 2014: Jay Muscat, 17, is killed by a great white while spearfishing at Cheynes Beach near Albany, WA.

December 15, 2014: Daniel Smith, 18, of Mossman,Qld, is killed while fishing at Rudder Reef, off the coast of Port Douglas.