A hundred men and women and horses have retraced the steps of the 800 Australian Light Horse soldiers in a reflective re-enactment of the Battle of Beersheba.

Nearly 100 years to the minute after the Australian light horsemen began their famous charge on the plains, the outskirts of Beersheba were again blanketed in dust.

This time though there was no gunfire nor violent gallop.

Instead, a group of 100 men and women - a mix of enthusiasts and descendants of the brave 800 mounted troops who captured Beersheba on October 31, 1917 - retraced their movements at a more reflective canter.

Here comes the cavalry! When you accidentally end up in front of the Australian Light Horse Brigade re-enactment... #Beersheba100 @SBSNews pic.twitter.com/Z4Xj21cOBE

They began their ride from the very spot the original assault started, as the sun faded away behind Be'ersheva River Park about 8km outside the town centre in Israel's southern Negev desert.

Prime Minister Malcolm Turnbull, his Israeli counterpart Benjamin Netanyahu and more than 2000 people watched on, cheering and clapping as members of the Australian Light Horse Association rode toward them.

The re-enactment was billed as the main event of the day, which started with a joint Australian-New Zealand national service at the Beersheba War Cemetery in front of 2500 people.

100 years to the minute since the Battle of #Beersheba - the iconic charge is recreated in a cloud of dust @SBSNews #Beersheba100 pic.twitter.com/sC9rHB474K

Mr Turnbull hailed the desperation and daring of the Australian Light Horse regiments who charged into live fire, an action that defied the expectations of the Turkish and German soldiers they defeated.

While the charge at the Battle of Beersheba in World War One was called "mad" at the time, it turned out to be a brave and heroic action that "turned the tide of history", he said.

At the service, Mr Netanyahu thanked the Australians for "ending 400 years of Ottoman rule in one great dash", paving the way for the state of Israel.

He also thanked "the families of the brave Aussies and Kiwis who fought and died here", bringing cheers from the audience, which included relatives of the soldiers who fought in the campaigns. 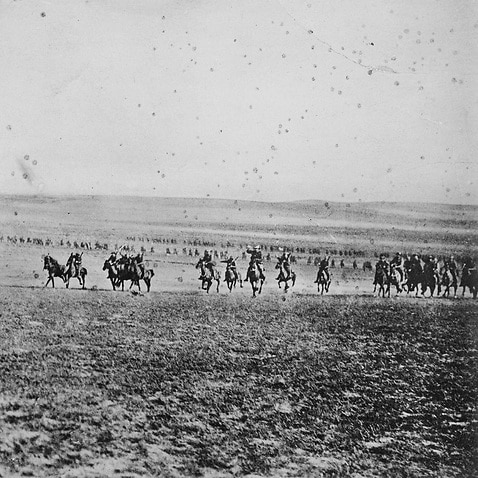 Battle of Beersheba 'should be the cornerstone of Australia's identity'

Among those laying wreaths at the end of the poignant, sombre, and at times funny service, were some of those who later re-enacted the famous charge in which 31 Australians and many horses died.

But the service honoured all those who served on behalf of all Australians and New Zealanders.

Some 1350 Australians died in the Middle East campaigns of WWI and Mr Turnbull said their feats would never be forgotten.

"The tradition of man and horse is part of us. It is part of Australia," he said.

"This was the last great cavalry charge in history."