There has been a huge spike in bike sales as people in Australia and around the world adopt cycling to abide by social distancing measures. 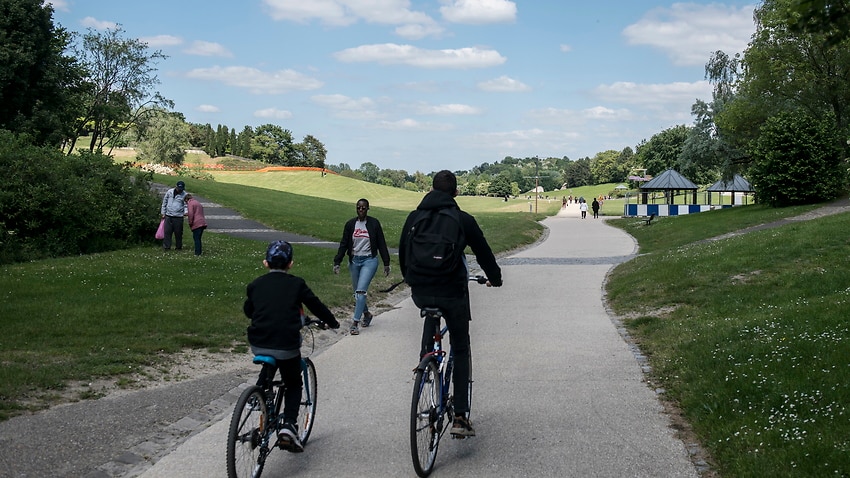 Bicycle sales have surged since the coronavirus outbreak. Source: AAP

Governments across the globe including Australia are investing in cycling infrastructure as bike sales boom during the coronavirus pandemic.

Bicycles have become a key social distancing tool as commuters try to to avoid crowded spaces on trams, trains or buses, while being able to exercise at a time when gyms are shut.

People across Europe have been encouraged to avoid public transport. Source: AP

Britain has the second-worst pandemic death toll in the world, but stay-at-home restrictions have been partially lifted in England this week.

People unable to work from home have been encouraged to avoid public transport due to the risk of close-contact transmission.

Transport minister Grant Shapps said many had already made their choice as "during this crisis, millions of people have discovered cycling - whether for exercise or as a means of safe, socially-distanced transport".

The Association of Cycle Traders in Britain said some 20,000 bikes awaiting manufacturing and delivery had already been sold or reserved.

The British government has announced an emergency plan of almost $500 million to adapt transport in the face of the epidemic with some funding earmarked for creating temporary cycle paths or widening existing ones in the coming weeks.

In Britain 20,000 bikes are awaiting manufacturing and delivery had already been sold or reserved. Source: AAP

“When we do start to slowly go back to how things were before the coronavirus shutdown, we know there will be fewer people that will be able to use public transport. We think that bikes are a really great way to help us deal with that.

“We know that people can easily keep physical distancing [and] can also keep working on their physical and mental health.”

A bike count conducted by Bicycle Network in late April found rider numbers were up by several hundred on many off-road paths in Australia.

Mr Miller said that the recent surge in bike sales had led comparisons with panic buying in local supermarkets.

“Many shops across Australia both in cities and also regional areas have had a huge increase in bike sales and in the interest of people wanting to ride bikes.

"We've heard of bike shops being completely cleared out - some people are saying bikes are the new toilet paper."

Byron Thomas, Team Leader at 99 Bikes Brookvale in Sydney's north, told SBS News that there was a 28 per cent increase in bike sales in April compared to December last year, which is generally their busiest month.

"Any time of the day we have a queue of people outside the shop. It was such a surprising change in the market.

"People are just looking for an affordable bike, sometimes it's four or five bikes for a whole family. They're wanting to get out and about, have something to do and bikes are a great option."

We're seeing a bike boom right now and I'd like to say something to my fellow long-time cyclists:

THEIR SEAT HEIGHT IS FINE.

In April alone 99 Bikes Brookvale sold 7,000 bikes and the shop has been so busy that it has had to hire an extra five people this month alone.

Mr Thomas said that a positive that has come out of the coronavirus is how it has encouraged people to get outdoors more, but he's hoping that once the pandemic is brought under control, people won't leave their bikes to rust in the garage.

"I think there would be a large portion that will [continue biking] and a portion that won't. I would say it's definitely good for the biking community - there'll definitely be more bikes out there. People will actually fall in love with the sport and continue riding."

On Monday, the NSW Government released a plan to provide a COVID-safe transport network which states physical distancing as a top priority.

The government said that they are currently working with councils on establishing more pop-up cycleways and enhancing pedestrian access to allow more people to find alternative routes to work.

Sydney Lord Mayor Clover Moore has also announced that six new cycle links will be built over the next few weeks.

The City of Melbourne has committed to putting in at least 10km of pop up bike lanes in the CBD, as well as implementing wider footpaths in the city to make it easier for bikers, walkers and runners.

Bicycle Network has long campaigned for local councils and governments to create incentives for riders such as pop-up bike lines "to make sure that there's enough room to keep physically distant."

Read More
Pro-cyclist gets on his bike to deliver medicine

"Something that we've asked for before is reducing tax brackets on bikes making people be able to salary sacrifice which would then make bikes more affordable for people.

“We've also have put forward the idea before of a paid ride-to-work scheme where people get paid $5 every day to ride a bike to work, which is similar to other schemes that are happening in the UK and some places in Italy.”

Bike lanes pop up across Europe

Cities across Europe will be adding additional cycle lanes.

Italy, the European country with the most cars per capita, plans to build at least 150 kilometres of cycle paths.

Paris has added a provisional 50kms of additional cycling lanes in the city over the past few weeks.

The local government is also offering to contribute to the cost of bike repairs and City Hall has offered a subsidy for new electric bikes.

Coronavirus fuels surge in the use of bikes in Paris. Source: AAP

In Barcelona, the use of cycle paths has increased by 325 per cent during peak hours and to suit that demand the city is adding 21kms of cycle lanes.