Health authorities are worried that coronavirus cases in NSW are spreading the virus to more people on average than in locked-down Victoria. 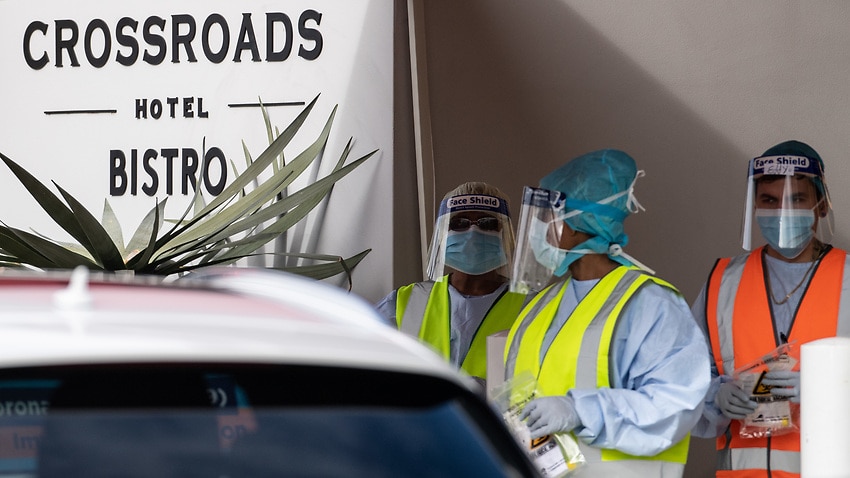 COVID-19 appears to have jumped between neighbouring rooms in hotel quarantine in Sydney. Source: AAP

Authorities fear NSW residents are taking the COVID-19 threat too lightly, with a key measure of virus infection creeping higher than in Victoria.

NSW recorded 15 new cases on Saturday, five of which are directly or indirectly connected to the cluster originating at the Crossroads Hotel in Casula, southwest Sydney, that now numbers 45 people.

Case numbers in NSW are considerably lower than in Victoria, which tallied 217 new infections and three deaths on Saturday.

But there are concerns about NSW's reproduction rate, which indicates the number of people infected by a single positive case and is considered crucial to controlling the spread.

Acting Chief Medical Officer Paul Kelly has revealed that while Victoria's reproduction rate is effectively at one, in NSW it has climbed to 1.4.

"People are more mobile, they are mixing in greater numbers," he said.

"And there are suggestions from that modelling that people are not taking those messages about physical distancing, hygiene and so forth ... as seriously as they currently are in Melbourne."

Prof Kelly noted that while the figure did not necessarily translate to higher numbers of cases, it demonstrated that the potential for transmission was higher in NSW than in Victoria.

Prof Kelly said there were good indications the lockdown was working in Victoria, where Saturday's numbers were half the record infections announced a day earlier.

Acting on the advice of Professor Kelly, Mr Morrison has written to the Speaker of the House of Representatives to request that the sitting fortnight commencing August 4 be cancelled.

Parliament was due to sit from 4 August to 13 August, and will now not meet again until the next planned sitting fortnight starting on 24 August.

But Professor Kelly said there will need to be substantially lower rates of community transmission in Victoria, and no worsening of the situation in NSW or other jurisdictions before he was happy with parliament gathering in late August.