Barbie, the world's most famous doll, has a new body. In fact, she has three new bodies - petite, tall and curvy.

Some 57 years after the impossibly busty and narrow-waisted blue-eyed Barbie doll was first introduced, California-based toy maker Mattel on Thursday released the new models, which it says better reflect a changing world.

Parents and feminists have long criticised Barbie's original shape as setting an unrealistic body image for girls, despite modifications over the years.

The new dolls have seven skin tones, 22 eye colours, 24 hairstyles and new clothes and accessories. They are available for order on website shop.mattel.com starting Thursday and will reach stores later. 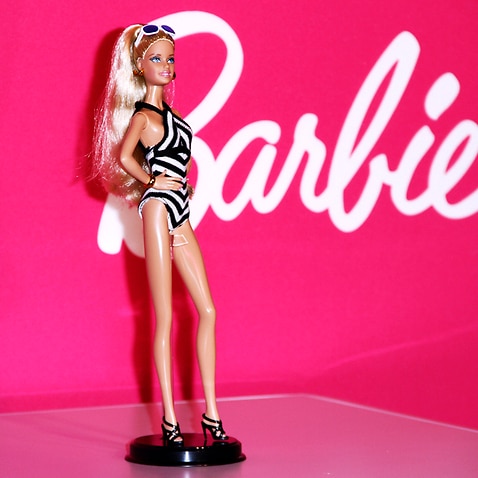 Barbie for boys? The gendered tyranny of the toy store

"We are excited to literally be changing the face of the brand," Evelyn Mazzocco, senior vice president and global general manager of the Barbie brand, said in a statement.

"These new dolls represent a line that is more reflective of the world girls see around them - the variety in body type, skin tones and style allows girls to find a doll that speaks to them.

"We believe we have a responsibility to girls and parents to reflect a broader view of beauty," she said.

The new curvy Barbie has a bigger bust, behind, thicker thighs and a protruding tummy. She landed on the cover of Time magazine on Thursday with the headline "Now can we stop talking about my body?"

"We believe we have a responsibility to girls and parents to reflect a broader view of beauty."

The classic Barbie doll, which was launched in 1959 as a doe-eyed teen in a zebra-striped swimsuit, will remain as part of the Mattel line.

The launch of the new range follows two years of declining sales of Barbie dolls around the world as girls increasingly turn to other dolls, electronic toys and tablets.

On her way to becoming a global pop culture icon, Barbie has tried out more than 180 careers, ranging from teacher to astronaut and US president. African-American Barbies and other ethnic versions were introduced starting in the late 1960s.