Brisbane mother Sally Faulkner and a 60 Minutes TV crew have appeared before a Lebanese judge as they face charges over a bungled bid to grab two children.

Australian woman Sally Faulkner and her estranged husband Ali Elamine are being urged by a Lebanese judge to reach an agreement over the custody of their children, as criminal proceedings continue in Beirut over a bungled bid to grab the two youngsters.

Faulkner is appearing in the court alongside Nine Network journalist Tara Brown and her 60 Minutes crew, Benjamin Williamson, David Ballment and Stephen Rice, over a botched attempt to retrieve her two young children in Beirut last week.

They are facing charges of kidnapping and being members of a criminal gang, which can attract maximum sentences of up to three years and 10 years respectively.

The children, Noah, 4, and Lahela, 6, were returned to their father soon after they were snatched by a child recovery team as they were walking with their paternal grandmother on a street in the southern Beirut suburb of Hadath.

It is understood the 60 Minutes team were in Lebanon to report on the recovery of the children.

Faulkner's lawyer, Ghassan Moughabghab, says if the Brisbane mum and Mr Elamine can reach an agreement, it would "help all the accused people", including the Australian journalists.

"The husband has to drop the charges," Mr Moughabghab said. "The judge is pushing [for him] to do that."

He said until last week, Faulkner had not seen her children for more than a year.

The case before Judge Rami Abdullah, which began on Tuesday, is ongoing in the Baabda Palace of Justice in Beirut.

Brown appeared first before the judge on Wednesday, handcuffed and escorted by security officials into the courtroom. She was soon followed by Faulkner and later Williamson, Ballment and Rice, who were handcuffed to each other but appeared in good spirits.

Nine's director of news and current affairs, Darren Wick, watched as his staff were led in for questioning. He declined to comment to AAP.

Australia's ambassador to Lebanon, Glenn Miles, met Lebanon's Foreign Minister Gebran Bassil on Wednesday to discuss the case, which is causing significant concern in both countries.

In a statement released after the meeting, Mr Bassil said he had asked for the formation of a joint Lebanese-Australian committee to resolve the custody case.

Outside the court, 32-year-old Mr Elamine told AAP the two children were fine and "were being sheltered from it all".

The court case is expected to stretch into Thursday. 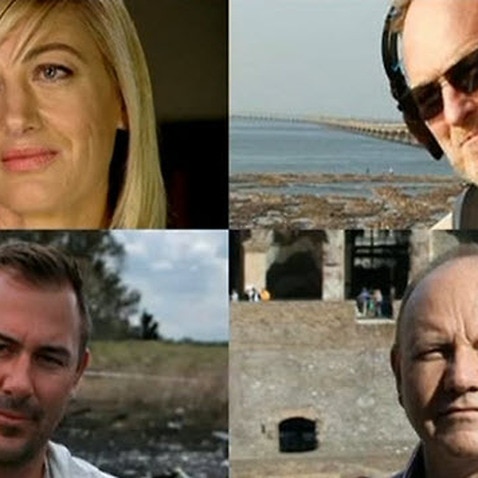 60 Minutes charges: How does the Lebanese legal system work?