Svetlana Tikhanovskaya said Sunday's presidential vote had been rigged and accused authorities of resorting to force to cling to power.

The main challenger in Belarus's disputed presidential election had fled to Lithuania on Tuesday after a second night of street clashes between police and opposition supporters left a protester dead.

Svetlana #Tikhanovskaya is safe. She is in #Lithuania. pic.twitter.com/6f9U2meoX0

He did not provide any further details but EU and NATO member Lithuania, which like Belarus was once part of the Soviet Union, has a history of granting refuge to Belarusian and Russian opposition figures.

Ms Tikhanovskaya's whereabouts had been unclear after campaign staff said they had lost contact with her and there had been concern for her safety.

Her surfacing in Lithuania came after thousands took to the streets of the capital Minsk for a second night on Monday, after authorities said longtime ruler Mr Lukashenko had secured a sixth term with 80 per cent of the vote.

Ms Tikhanovskaya, a political novice who has energised the opposition, came second with 10 per cent and protesters are backing her claim to have won the election.

For the second night in a row, police used rubber bullets, stun grenades and tear gas to disperse demonstrations, though protesters fought back with stones and fireworks and built makeshift barricades, AFP reporters, protesters and witnesses said.

Dozens of people have been injured in the violence and the first fatality was confirmed on Monday when police said a man died after an explosive device went off in his hand.

Ms Tikhanovskaya's staff had said earlier that she would not join demonstrations to avoid "provocations" and it was unclear how her sudden departure would affect the opposition. 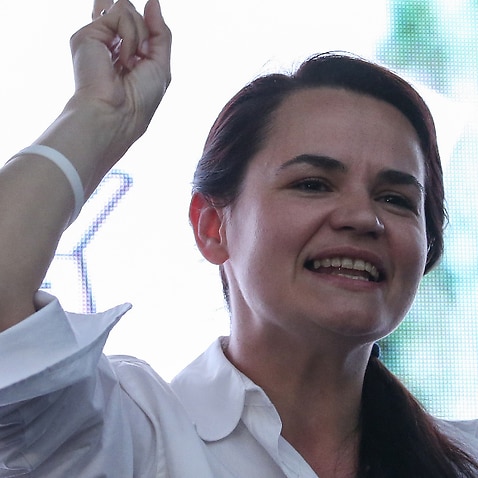 Mr Lukashenko's opponents have been calling for running protests against his regime and there were calls for a nationwide strike.

The 37-year-old mother of two decided to run for president after the authorities jailed her husband, popular blogger Sergei Tikhanovsky, and barred him from contesting.

Her campaign galvanised the opposition, presenting a historic challenge to Mr Lukashenko, who has ruled Belarus since 1994, brooking no dissent and earning the nickname of "Europe's last dictator".

Western governments have widely condemned the police crackdown, with some in the European Union suggesting it may reimpose sanctions on Mr Lukashenko's regime that were lifted several years ago. 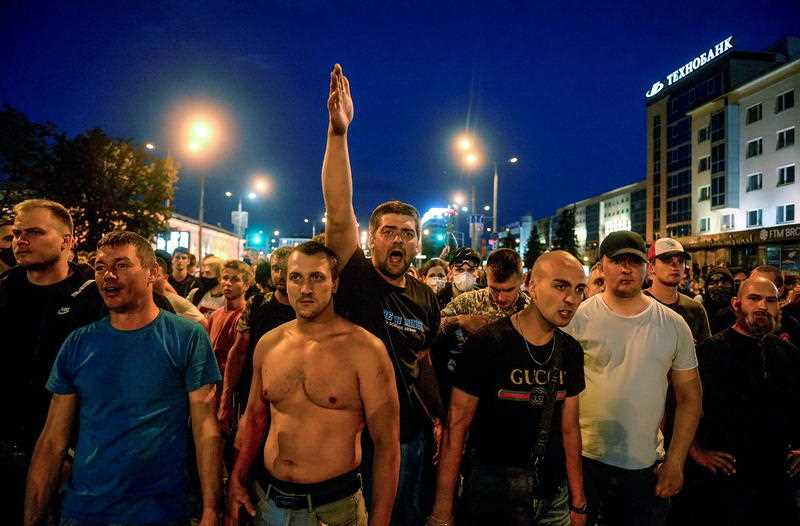 People react during a protest the day after the presidential election, in Minsk, Belarus, 10 August 2020
AP

The White House said it was "deeply concerned" by the violence, adding that "intimidation of opposition candidates and the detention of peaceful protesters" were among numerous factors that marred the election and its aftermath.

European governments also questioned the results, with Germany voicing "strong doubts" about the conduct of the vote, France urging restraint and Poland calling for an emergency EU summit.

Mr Lukashenko was defiant on Monday, vowing he would not allow Belarus to be "torn apart" and suggesting protesters were foreign pawns.

"We recorded calls from abroad. There were calls from Poland, Britain and the Czech Republic, they were directing our - forgive me - sheep," Mr Lukashenko said.