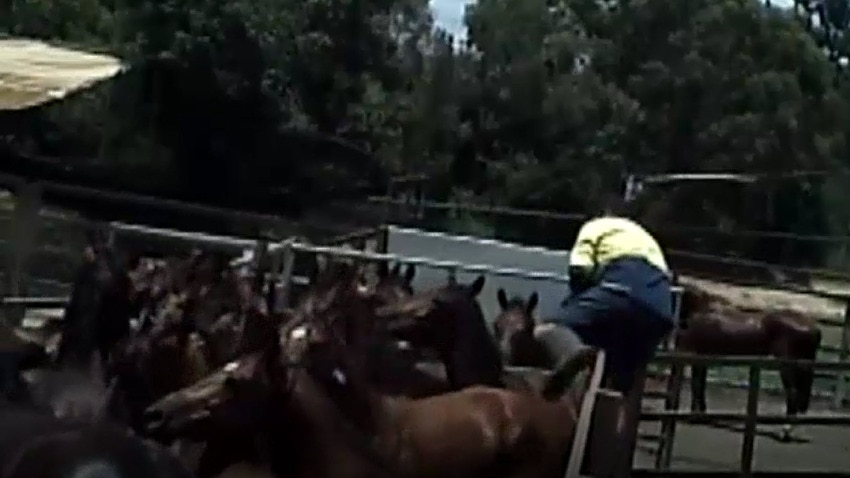 Racing Australia's chief executive says he's "appalled" that healthy Australian racehorses are being slaughtered but insists it's up to state governments to ensure animal welfare laws are being obeyed.

Barry O'Farrell was speaking on Friday after an investigation claimed hundreds and possibly thousands of racehorses were being sent to slaughter every year - a finding the federal government has described as "upsetting".

That's less than one per cent of retiring racehorses.

The ABC reports the number is much higher despite rules requiring the registration and tracking of horses from birth to retirement.

"The racing industry has hidden behind bogus studies they commissioned and data collected from a compulsory retirement form claiming that less than 0.5 per cent of racehorses are sent to slaughter," Coalition for the Protection of Racehorses spokesman Elio Celotto said in a statement.

"They have now been proven wrong and must own up to the fact that they have a serious welfare problem."

The CPR said up to 220 horses are being killed weekly at a Queensland abattoir and on average 56 per cent are racehorses.

"With another abattoir that also kills horses and another 33 knackeries, we estimate the real number to be more than 10,000 (a year)," Mr Celotto said.

ABC vision showed workers at the Meramist abattoir north of Brisbane tormenting horses before they were killed.

The Meramist Abattoir in Caboulture, Queensland was recorded slaughtering around 300 racehorses in less than a month.

Mr O'Farrell on Friday said the racing body had checks and balances but "no legal right or power" when it came to on-selling horses after retirement.

"Where are the state governments?" he said, adding the industry had been a strong supporter of a national horse traceability register "which would make it easier for state and federal welfare authorities to clamp down on the sorts of practices we saw last night".

Queensland Racing Minister Stirling Hinchliffe said biosecurity officers had been ordered to investigate the allegations of animal cruelty at the Meramist abattoir, the ABC reported on Friday.

"They'll be working ... with the Queensland Police Service to retrieve any extra footage that was not screened by the ABC," Mr Hinchliffe said.

I am always saddened at this time of year that Aussies venerate an industry that is founded on gambling and animal cruelty #horseracingkills https://t.co/SZ3qR40SQp

"The vision was sickening and horrendous and Racing NSW calls upon the Queensland government ... to take the strongest possible action against the alleged perpetrators of such cruelty," he said in a statement.

"Such conduct and any mistreatment of horses is not tolerated in the NSW thoroughbred racing industry."

NSW Racing Minister Kevin Anderson says if animal cruelty legislation has been breached then "there are options available".

"Anybody who has either breached the rules of racing or committed animal cruelty should be brought before the courts and feel the full force of the law," he told reporters in Sydney.

Loving the fact #NupToTheCup is trending. Hating the reasons why. #horseracingkills

"It is upsetting and if there is a law ... it needs to be enforced," he said.

Racing Victoria chief executive Giles Thompson said he was "sickened by the horrific images" and called for the introduction of a national horse traceability register.

The CPR is planning a number of protests at racecourses in Melbourne and Sydney over the weekend.