Schools and malls have closed in Hong Kong amid the stepping of up a new phase of pro-democracy protests. 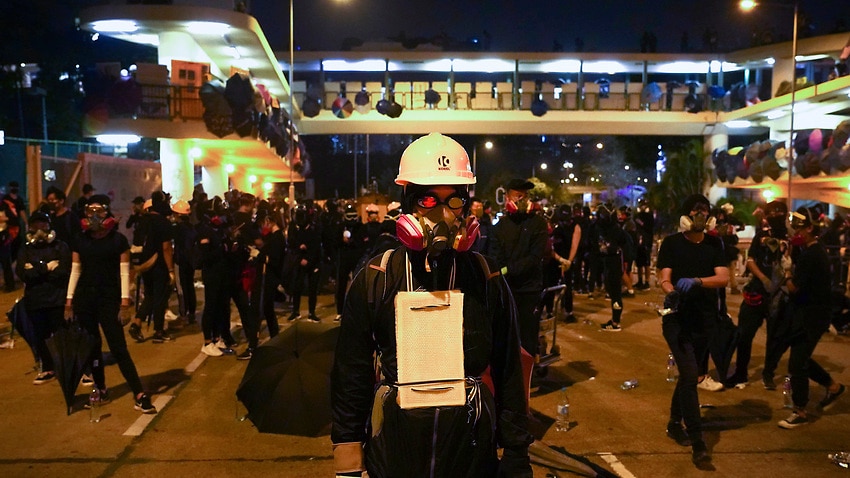 Pro-democracy protesters on Wednesday stepped up a "blossom everywhere" campaign of roadblocks and vandalism across Hong Kong that has crippled the international financial hub this week and ignited some of the worst violence in five months of unrest.

The new phase in the crisis, which has forced schools and shopping malls to close as well as the shutdown of large chunks of the vital train network, has prompted police to warn the city is on the verge of "total collapse" and a "breakdown".

China, facing the biggest challenge to its rule of the territory since it was handed back by the British in 1997, has insisted it will not buckle to the pressure and warned of even tougher security measures.

As they have since the start of the week, protesters on Wednesday choked roads and blocked traffic with anything they could lay their hands on including bricks, bicycles, couches and other materials. Key routes were targeted in morning and after-work peak hours.

Various lines on the subway - used daily by more than half of the city's 7.5 million people - were also suspended, forcing many workers to stay at home.

In the Central business district, hundreds of people left their offices at lunchtime to join the more hardcore protesters setting up barricades outside luxury-item shops and headquarters of big financial firms.

Protesters carry a hand-made catapult for fighting against the police during a protest at Hong Kong Baptist University Source: EPA

Authorities said 58 injured people - one of them in critical condition - were taken to hospitals during Wednesday’s unrest.

Hospital authorities did not provide details on the critical case, but local media reported that a 70-year-old man was seriously hurt from a suspected hit in the head with a brick during a clash between protesters and residents in the Sheung Shui district.

Highlighting the growing security fears, mainland Chinese students began fleeing Hong Kong on buses and boats back across the border, according to police and universities, although it was not immediately clear how many had left.

A protester with his face covered up is seen as the moon shines over the barricaded bridge leading into the Chinese University of Hong Kong Source: EPA

The chaos was part of the largely leaderless protest movement's new strategy branded "blossom everywhere", in which small groups target as many parts of the city as possible to cause maximum disruption and stretch police resources.

Until this week protesters had largely confined their actions to evenings and the weekends.

The campaign began on Monday with an effort to shut down trains and enforce a city-wide strike, and has for the first time seen three straight days of chaos during the working week.

"The rioters' intention is to bring Hong Kong into a total breakdown. No excuse, no political motives can justify or glory this madness," police spokesman John Tse told reporters on Wednesday.

A day earlier, one of his colleagues said Hong Kong was "on the brink of total collapse".

The poisonous atmosphere worsened on Monday morning when a police officer shot an unarmed 21-year-old protester, leaving him in a critical condition.

It was only the third confirmed instance police had hit someone with live rounds since the unrest began in June.

The shooting, broadcast live on Facebook, exacerbated fury among protesters about what they say is excessive police violence.

However, fears have also risen about increasingly violent tactics from the protesters.

A masked person on Monday doused a 57-year-old man, who had been arguing with protesters, with a flammable liquid and set him on fire.

He was also hospitalised in critical condition.