So Boaty McBoatface was the favourite name by a breezy ocean mile for the UK's new Royal Research Ship - but will it actually make the cut?

It may have taken a public naming poll by storm, but the newest $380 million Royal Research Ship is unlikely to be named Boaty McBoatface.

The unusual moniker emerged as a runaway favourite during a campaign that allowed people to suggest names for the ship, which will carry scientists doing research in the Antarctic region.

When the vote closed on Sunday, Boaty McBoatface was the clear winner with more than 124,000 votes - well ahead of the second placed name the RRS Poppy-Mai, which came in with just over 34,000 votes.

However the Natural Environment Research Council, who created the poll, have said it reserves the right to make the final naming decision.

Thank you all for supporting our #NameOurShip campaign. The final decision will be announced in due course. pic.twitter.com/yg4VHvNrm5

The UK Science Minister Jo Johnson told the Daily Telegraph parliament would be unlikely to endorse the public's favourite name.

"You won't be surprised to know that we want something that fits the mission and captures the spirit of scientific endeavour," he said.

"I am grateful to everyone who has participated in the competition.

“The public has come up with some fantastic and very imaginative suggestions [for the name]. We are reviewing all of them. We will come to a decision in due course.”

Despite the misgivings of authorities, the campaign to have the ship named Boaty McBoatface has not abated online.

TBH, I think the name #BoatyMcBoatface is an awesome name for a scientific ship! Why have a poll at all if you're going to ignore it?

#BoatyMcBoatface wins the online poll.What better way to get kids interested in science at a young age than a ship called Boatie McBoatFace

I shall call my kayak #BoatyMcBoatface Jr. In respect of the true boat faced winner https://t.co/YNcbPFYWjd

Don't let those girls down, @NERCscience. Finish what you set out to do #BoatyMcBoatface https://t.co/QzsOJM3C69

In third place was the RRS Henry Worsley, named for the explorer who died during a solo expedition in the Antarctic in January, with 15,000 votes.

The RRS It's bloody cold here and the RRS David Attenborough rounded out the top five with just over 10,000 votes each.

It quickly shot to the top of the favourite suggestions and at one point the naming site crashed as people rushed to vote for the social media favourite. 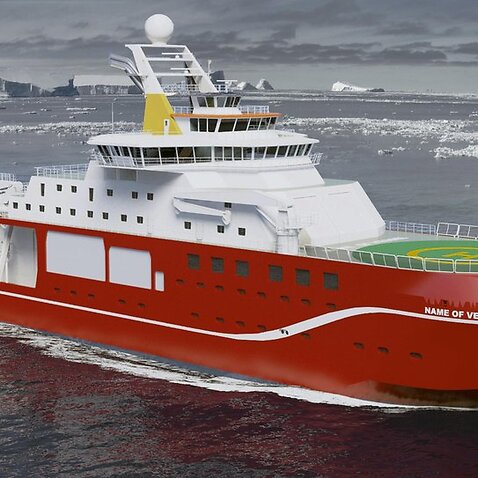 'We all have a role': Hundreds of AFL players call for greater climate action