The Department of Immigration denies Australian Border Force officers will be stopping people in Melbourne's CBD over the weekend, despite an earlier statement saying they would target any individual they 'cross paths with.'

The exercise - called Operation Fortitude - will be carried out on Friday night and Saturday and will involve Australian Border Force (ABF) officers, as well as representatives from Victoria Police, Metro Trains, Yarra Trams, the Sheriff’s Office and Taxi Services Commission.

The initial announcement on Friday was met with disbelief on social media, with Senior Advisor to Senator David Leyonhjelm Helen Dale tweeting the words "papers please" in German. 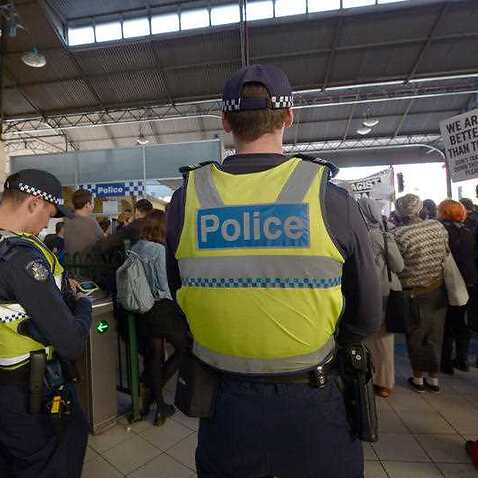 'Clumsy' Operation Fortitude nothing to do with Minister's office, ABF head says

A Department of Immigration and Border Protection spokesperson said Border Force "does not and will not stop people at random".

"ABF officers will assist partner agencies by conducting background visa checks on individuals who are referred to us," the spokesperson said.

"... The ABF does not target of the basis of race, religion, or ethnicity."

However, an earlier statement issued by ABF quoted Regional Commander for Victoria and Tasmania Don Smith stating that officers would be "speaking with any individual we cross paths with".

Mr Smith said that the operation was part of a "mission" to create a “secure and cohesive society”.

“You need to be aware of the conditions of your visa; if you commit visa fraud you should know it’s only a matter of time before you’re caught out," he said.

Other questions put to the Immigration Department by SBS were not answered.

Under the Migration Act, an officer may require a person "whom the officer knows or reasonably suspects is a non-citizen" to present evidence of their identity or citizenship status.

The operation will target people travelling to, from and around the Melbourne CBD.

What the Border Force is doing in Melbourne is eerily similar to what the IDF did to me a in Jerusalem. Really isn't a nice feeling. #auspol

Asylum seeker and refugee advocate Pamela Curr expressed outrage at the decision to include Border Force officers in the patrols.

"I want to weep for my country," she said.

"I have already had a visit from AFP care of Border Force, however as a sixth-generation Australian 66-year-old woman, I am not easily scared."

An international student friend says she's going to carry around her visa this weekend, I said she didn't need to, she's scared not to.

When asked on the operation, Opposition Leader Bill Shorten said that Labor was concerned and interested.

"If you're going to do a blitz, I don't know why you'd necessarily telegraph it to the media first," he said.

"We'll wait to see if the government is fair dinkum or if this is just a press release to try to draw some positive attention to themselves."

Greens immigration spokeswoman Senator Sarah Hanson-Young said it was evidence of the "militarisation" of the immigration department.

"This is a political stunt from a government that's desperate to divide the community rather than unite it," she said in a statement.

"The government's eagerness to militarise the immigration department in its ongoing war against foreigners is extremely disappointing. How will the department guard against racial profiling when it comes to these visa checks and how much will this absurd exercise be costing the Australian taxpayer?"

Greens MP for Melbourne Adam Bandt said it could threaten Melbourne's reputation as a welcoming city.

"How will the Border Force distinguish between locals, visitors and visa holders?" he told AAP.

"Will every person in Melbourne now be asked to show their papers as they move about the city? Or will they only be stopping people with certain skin colours?"

Social media users are calling on people to protest the operation during a press conference scheduled for Friday afternoon. They are also urging people to film any action across the weekend.