Former Liberal staffer Brittany Higgins has called for politicians of all stripes to take action on sexual harassment and abuse, during an emotional speech at Canberra's March4Justice rally. 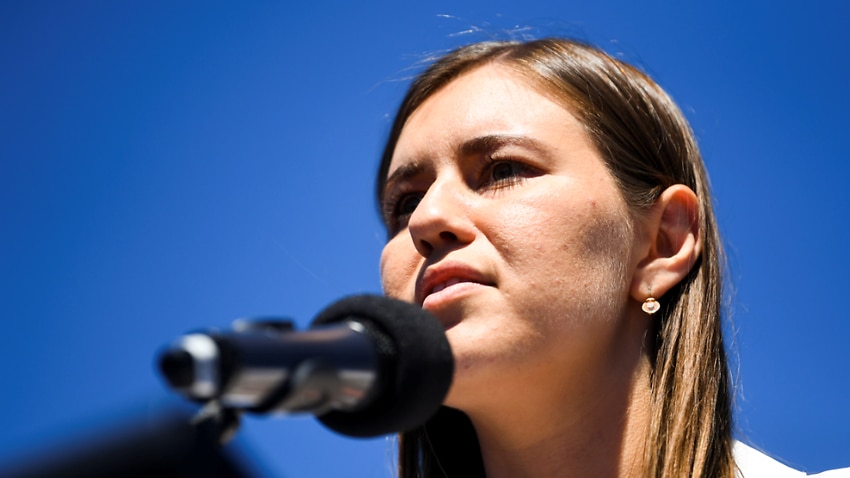 Former Liberal staffer Brittany Higgins has questioned whether politicians can be trusted to address sexual harassment and assault in the community “if they aren’t committed to addressing these issues in their own offices".

Speaking at one of several rallies being held around the country on Monday, Ms Higgins said her former bosses had downplayed her lived experience and she felt like a “political problem” when she went public with allegations about being raped in Parliament House.

She said she came forward in the hopes of protecting other women, and it was time for politicians from all parties to stop “sidestepping accountability” and address gendered violence.

“I was raped inside Parliament House by a colleague, and for so long it felt like the people around me only cared because of where it happened and what it might mean for them,” she said.

“It was so confusing because these people were my idols … and suddenly they treated me differently.

“I wasn’t a person who’d just gone through a life-changing, traumatic event. I was a political problem.”

A protesters holds a placard during the Women's March 4 Justice in Canberra on Monday. Source: AAP

Ms Higgins said her story had served as a painful reminder for women that "if it can happen in Parliament House, it can truly happen anywhere”.

She said Australia's political leaders "should be the exemplar, the gold standard" but "sadly, this just isn't the case".

“If they aren’t committed to addressing these issues in their own offices, what confidence can the women of Australia have that they will be proactive in addressing this issue in the broader community,” Ms Higgins said.

“This isn’t a political problem. This is a human problem. We’ve all learned over the past few weeks just how common gendered violence is in this country.

“It’s time our leaders on both sides of politics stop avoiding the subject and sidestepping accountability.”

At the Hobart March4Justice rally, Australian of the Year Grace Tame welcomed the “paradigm shift” in normalising conversations around sexual abuse.

Ms Tame called for attendees to take action and stand up to abuse when they saw it, saying an individual person’s contribution can have a powerful domino effect.

She said making noise was the start of the solution.

“When an issue that has been shrouded in darkness for such a long time is suddenly thrust into the light, there's widespread shock and disbelief over how something so evil could happen, and not just happen, but happen so ubiquitously,” Ms Tame said.

"And the answer is plain and simple - silence. Evil thrives in silence.